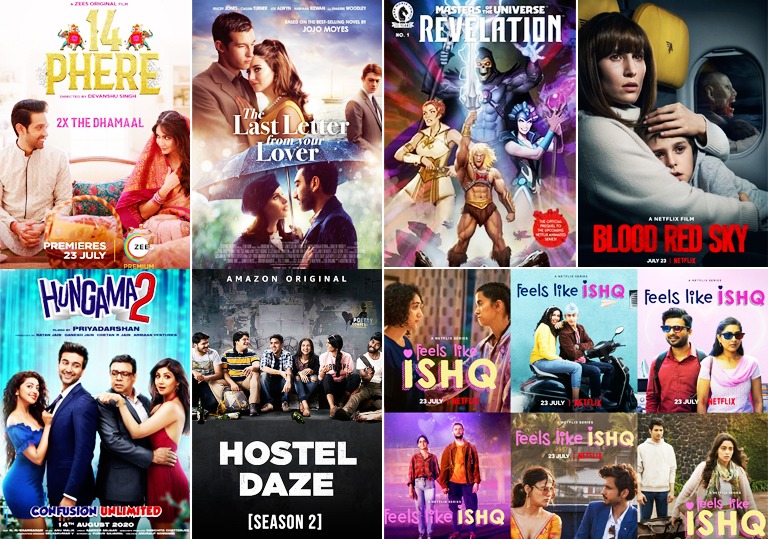 Are you bored with the extended Eid Holidays? Seeking some entertaining stuff to watch out for? Fashion Times brings you the list of new OTT releases this weekend. Believe us we have an amazing lineup for July 24. Starting from Priyadarshan’s Hungama 2, Vikrant Massey’s 14 Phere to Netflix’s anthology series Feels Like Ishq, the list below depicts the top 7 new releases of movies and series that you can binge on this weekend over several platforms like Netflix, Amazon Prime Video, ZEE5, and Disney + Hotstar.

Vikrant Massey & Kriti Kharbanda starrer comedy-drama is all about two weddings but with a twist. The lead actors have been paired for the first time. It is directed by Devanshu Singh and written by Manoj Kalwani. The film also stars Vinay Pathak, Gauahar Khan, Vineet Kumar, Govind Pandey, and Jameel Khan in pivotal roles.

A young female journalist in contemporary London uncovers a series of love letters telling the story of an intensely romantic but star-crossed affair in the 1960s and becomes obsessed with discovering the lovers’ identities and finding out how their love story ends. The romantic drama film directed by Augustine Frizzell and written by Nick Payne and Esta Spalding, based on Jojo Moyes’ 2012 novel of the same name. It stars Felicity Jones, Callum Turner, Joe Alwyn, Nabhaan Rizwan, and Shailene Woodley.

Revelation is a direct sequel series to the original series Masters of the Universe. Featuring He-Man, Teela, Orko, Cringer, and Man-At-Arms, the story features them as guardians of Castle Grayskull in a battle against Skeletor, Evil-Lyn, Beast-Man, and the legions of Snake Mountain. After a final battle forever fractures Eternia, it’s up to Teela to solve the mystery of the missing Sword of Power in a race against time to prevent the end of the Universe. Her journey will uncover the secrets of Grayskull at last.

What happens when an overnight flight gets hijacked? In Netflix’s Blood Red Sky, a group of terrorists hijacks an overnight transatlantic flight and threatens to kill passengers. Amidst the mayhem, a mysteriously ill woman named Nadja must unleash a monstrous secret of being a bloodthirsty vampire and hunt the terrorists to protect her 10-year-old son.

Hungama 2 is a romantic comedy directed by Priyadarshan. The film is based on Priyadarshan’s 1994 Malayalam film Minnaram and happens to be a sequel to the 2003 film Hungama. Your favorites Paresh Rawal, Shilpa Shetty, Pranita, Meezaan, Johny Lever, Rajpal Yadav… (phew!) they are here to tickle your funny bone. The movie revolves around Meezaan’s character trying to disprove that he is the father of his college girlfriend’s child.

Feels like Ishq is an anthology of 6 unique love stories coming together to celebrate the feeling of falling in love. This heartwarmingly sweet old-school romance will leave you with a fuzzy feeling, a huge smile, and maybe on a nostalgic trip down memory lane of your first ishq.

What are you watching this weekend? Let us know in the comments.