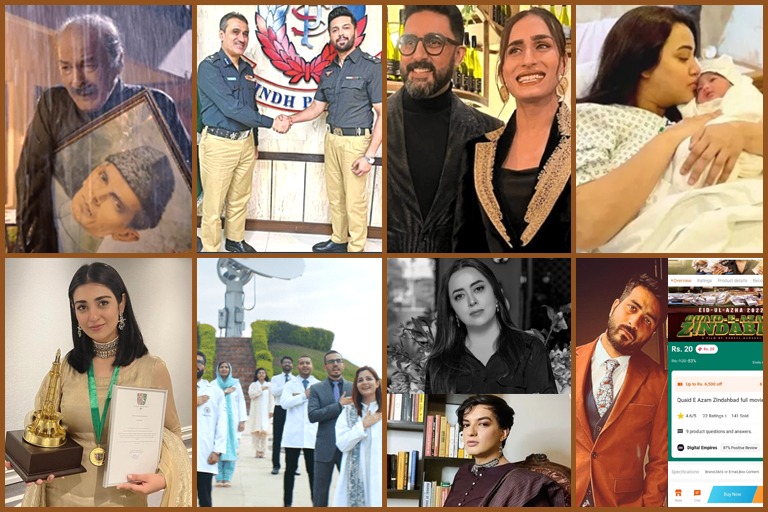 Mahira Khan took to Instagram and shared a scene from her recent hit film Quaid-e-Azam Zindabadand offered a glimpse of the Khaani actor’s expertise. She penned a note of appreciation alongside it and wrote, “Qavi Saab.. the legend, the actor par excellence. at the age of 79 stands tall amongst a plethora of young artists because till date, he is the most dedicated of them all. He is always prepared. He loves what he does and you can see it in every frame.”

2. Fahad Mustafa’s bestowed with an honorary title by Sindh Police

Fahad Mustafa aka Inspector Gulab was honored for his efforts in unveiling social evils such as corruption through his film Quaid-e-Azam Zindabad. Not just that, the Kankar actor had a discussion with IG Memon about the direction of the local police. Mustafa announced this achievement on Instagram, and wrote, “Today, I truly believe Gulab has achieved his biggest dreams. Many many thanks to IG Sindh Police Ghulam Nabi Memon for honoring me with the title of Honorary SSP, this Independence Day, and for bringing Gulab’s ambitions to life. I will never get over the love and support you all have shown to this character and Quaid-e-Azam Zindabad, and I hope to continue serving my nation proudly!” he said.

3. Joyland wins the Best Film from the Subcontinent Award at (IFFM)

Saim Sadiq’s Joyland won an award at the Indian Film Festival of Melbourne (IFFM), becoming the Best Film from the sub-continent at the event. Actress Alina Khan shared the news with pictures on her Instagram account, saying,“We are so honored and thankful that IFFM gave us the best birthday gift for Pakistan by awarding #Joyland with the Best Film from the Sub-continent Award on the 14th of August!”

The Parizaad actress embraced motherhood and welcomed her baby girl Izzah Hamza Malik. She shared photos with her firstborn on Instagram captioned, “Lucky are those whose first child is a daughter. And I [have been] blessed with one ALHUMDULILAH after 12 years. Finally, Allah [has] blessed us with His Rehmat. We are parents now. It’s a baby girl, meet Izzah Hamza Malik.” Adding the date of birth, August 13, she asked fans to remember her family in their prayers.

5. Sarah Khan gets Pride of Performance in Norway

Actor Sarah Khan got the honour of winning a prestigious award from overseas. In a recently held event at Olso, Norway, Khan got the opportunity to represent her country Pakistan at an overseas platform along with her husband

The re-recorded national anthem of Pakistan composed with modern technology was released on 14th, August to mark the nation’s 75th Independence Day. The national anthem has been sung by 155 singers, with the participation of 48 musicians and 6 bandmasters, after 68 years since it was first recorded.

7. Maria B slammed for transphobic comments

Maria B yet again flooded social media with her comments on trans-activist Mehrub Moiz Awan AKA Shumaila Bhatti who was removed from a panel of speakers at the TEDx conference. Maria, whose daughter is a student at ISL, claimed that parents have a right to decide the right role models for their children.

Director Nabeel Qureshi warns of strict action against e-commerce platform Daraz for selling pirated copies of his recent film Quaid-e-Azam Zindabad. The tickets of the film that is currently showing in cinemas is being sold at as low as Rs 20. “This is criminal! Daraz is selling our film Quaid-e-Azam Zindabad’s pirated version officially on their website, while the film is playing in cinemas across Pakistan. This is damaging the cinema and film industry. It’s alarming. [Production company] Filmwala Pictures is going to take strict action against it,” Qureshi tweeted.

This is criminal ! @darazpk is selling our film #quaideazamzindabad pirated version Officially on their website, while the film is playing in cinemas across pakistan, this is damaging the cinema and film industry, its alarming @FilmwalaP going to take strict action against it. pic.twitter.com/8RMMYLCtH1