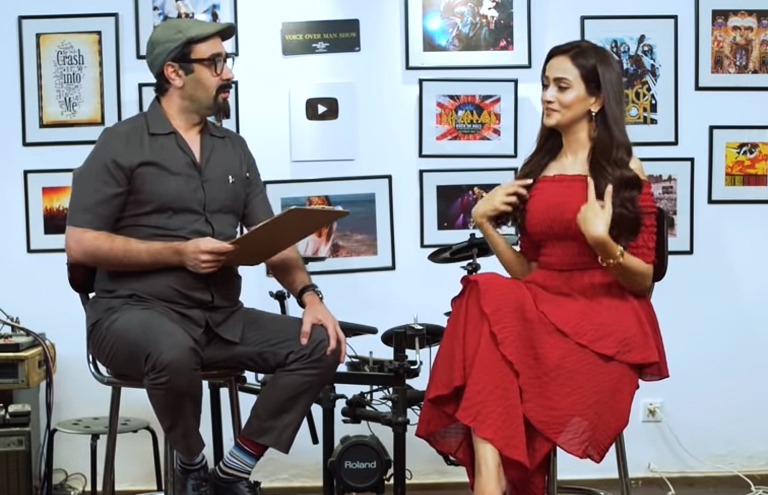 Voice Over Man hosted by filmmaker Wajahat Rauf is undoubtedly one of the most popular digital chat shows. Not just fans but also celebs wait for the show to get some exciting inside scoops of the industry. Once again, a new episode of the show entertained the audience. Actress Zarnish Khan was the special guest on the show. A lot of questions related to her professional as well as personal life. The actress gave some spciy answers that will leave you speechless.

Watch the complete episode of Voice Over Man here:

Upon being asked who would win a dance competition between her and [Faryal Mehmood], she responded, ‘I would win’. She further took a dig at Mehmood and said, ‘the grace and resistance required for dancing is missing these days.’

Sharing her views about cosmetic enhancements like lip fillers or botox, Khan said, ‘Not Interested’. She further added, ‘I wouldn’t want to change anything in my face. You can see in ten years; I’ll look the same. I don’t want the duck lips. They’ve all turned into ducks these days. Seriously, they were all so pretty. What happened?’

When asked about who is more disrespectful and ruder between her and Alizeh Shah, Khan said, ‘It doesn’t matter who [Alizeh Shah] is up against, she’ll win.’

This is the third time when Shah is being called out by the members of the fraternity. Her alleged rude behavior was highlighted by his co-actor Yasir Nawaz and Naveed Raza for not respecting senior artists. “No matter how famous or talented you are, you should never overlook someone’s seniority and respect. What’s happening in your personal life should not be brought to the sets. It is a workplace,” Raza had said on Time Out With Ahsan Khan. Later Feroze Khan jumped into the matter, defending Shah. Also, Momina Mustehsan spoke in favor of Shah while she was being criticized for her choice of outfits.

Do you agree with Zarnish Khan’s comments at the Voice over man? Let us know in the comment section below