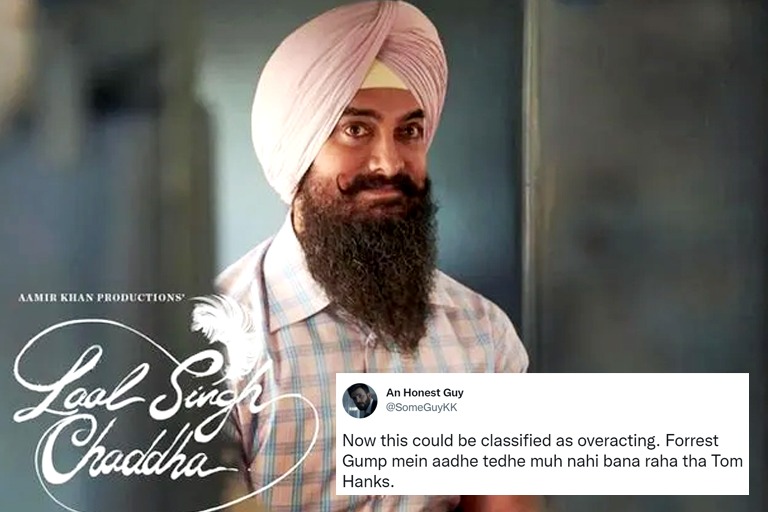 The trailer of the much-awaited Aamir Khan and Kareena Kapoor starrer Laal Singh Chaddha was released during the IPL Finale. The trailer depicts Laal Singh Chaddha’s journey from a differently-abled child to getting selected for the Indian Army. For the unversed, the film is an adaptation of the 90’s Hollywood film Forrest Gump which featured Tom Hanks and Robin Wright in leading roles.

The Instagram page of Aamir Khan Productions shared the trailer. The post read, “Experience the extraordinary journey of #LaalSinghChaddha, a simple man whose heart is filled with love, hope, and warmth. #LaalSinghChaddhaTrailer out now! Releasing in cinemas worldwide on 11th Aug.”

Things however didn’t turn out the way Aamir Khan would have wanted. The trailer left a bittersweet impression amongst the audiences. Khan is severely being criticized by netizens for playing similar roles like PK, 3 Idiots, and Dhoom 3 over and over again.

Let’s Check Out How the Internet Reacted

Aamir Khan is a perfectionist and a method actor.

Don’t ever assume that Bollywood has hit rock bottom. It will scrape and dig through the bottom and find new lows. Right now, it is Aamir Khan leading the digging party.

Why waste milk on shivji give to needy similarly why waste money on Aamir Khan movies donate to @agniveer or pm cares fund #LalSinghChaddha pic.twitter.com/mnUUlySgAz

As I said earlier, Aamir Khan is strictly an average actor with very limited range of expressions.

Please watch Forrest Gump instead of #LaalSinghChaddha.
It’s a great movie and is available on Amazon prime in both English as well as Hindi
Why watch a copy?#BoycottBollywood #BoycottLaalSinghChaddha #AamirKhan #SushantSinghRajput pic.twitter.com/uCma1znY1J

After knowing #LaalSinghChaddha is remake of #ForrestGump. I decided to watch original movie for FREE and donate the amount of tickets to poor & hungry children.

Trolls brought up Aamir Khan’s old controversial statements like ‘India is intolerant,’ among other things, to critique the film. A fan wrote, “Aamir Khan Said “India Is Intolerant and He wants to Leave India” #BoycottBollywood #BoycottLaalSinghChaddha.

Wonder why star sports is giving him the platform to present a trailer of a iconic movie which is copied by a person who feels unsafe in India.
Now as he has to promote his movie he wants to connect with us..#BoycottLaalSinghChaddha https://t.co/BTNusN59GI

His next movie is coming. Acting as mentally challenged in Army Uniform. Has lots of jokes on Army too. Hope people boycott this rubbish. Don’t know how he got clearance from IA for using uniform, pic.twitter.com/HZHxPad6E9

Laal Singh Chaddha is one of the most anticipated films of the year and will release on August 11 this year. The film has been directed by Advait Chandan and written by Atul Kulkarni and Eric Roth. Kareena Kapoor Khan plays Aamir’s love interest. It also features Mona Singh and Naga Chaitanya in important roles. Presented by Viacom18 Studios, the Indian adaptation of the film has been done by Atul Kulkarni. The film will also reportedly see a cameo appearance by Shah Rukh Khan.