Top Netflix shows that stole our hearts in 2021 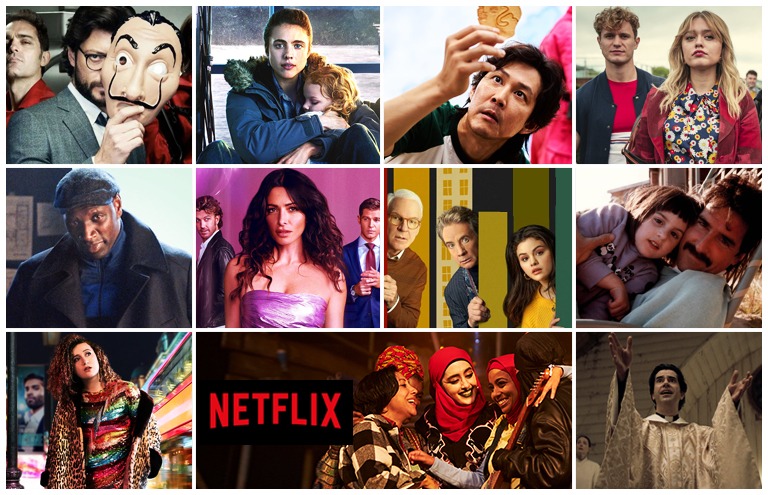 2021 delivered another round of moving, surprising and serotonin-spiking TV shows to keep us going. From heart-warming gems such as Starstruck to We are Lady Parts, to riveting dramas such as Maid, The North Water and Midnight Mass, let’s look back at our favorite Top Netflix shows of the year.

I guess none of us have gotten through this year (or the last TBH) without hearing about Money Heist, or its theme song. So how can it be possible that we not recommend this brilliant heist show?


Squid Game was released on Netflix with next to no advertising as a completed series. Before long, Squid Game became the most-watched show on the streaming platform, bypassing the immensely popular Bridgerton. Squid Game really gained a great deal of global popularity for its thrilling storyline.  The series takes a popular concept and twists it into something that somehow manages to be entirely new. There are countless reasons why audiences loved Squid Game, and why they’re looking forward to a second season.

Maid is being greatly applauded for the brilliant performance by Margaret Qualley and the engrossing plotline. It was released on the streaming platform on October 1 and has remained in the Top 5 Shows most viewed ever since in many countries. According to Netflix, the series is on its way to reach 67 million households in its first four weeks, surpassing the record set by last year’s big hit, The Queen’s Gambit, which was watched by 62 million subscribers. the 10-episode limited series takes viewers on the personal emotional journey of a young woman dealing with domestic abuse, the precocity of poverty and homelessness, and a troubled mother/daughter relationship.

Sex Education grasped the attention of its audience since the moment it began.  The show has rocketed to the top of Netflix for its third season debut, a show that often flies under the radar among the service’s higher profile offerings, but clearly, it has an audience. Not that many Netflix originals make it to three seasons in the first place, and when they do, you don’t often see them debut at #1 on the charts. And it definitely left us all waiting for the next season.

The French heist thriller was a huge global hit when it debuted on Netflix in January. Even the creator and cast were surprised. The Netflix original series become the most-watched French series ever on the streaming platform after the launch of Part 1 in January 2021 seen by 76 million subscribers within its first 28-day release. A day after the release of Part 2, Lupin has already entered Netflix’s Top 10 across the globe, if it isn’t in first place, like in France, Belgium and Germany, the series is within most countries’ top 5.

This show gave the viewers all the spice they were looking to end the year with. It depicts the story of a woman bumping into an old lover while she’s still married. And how she can’t seem to forget her exciting escapades with him.

Only Murders in the Building

This murder mystery is funny, smart and the episodes are a packed 30 minutes each. The plot takes a handful of twists and turns over the 10-episode season. If you figure out who did it before the characters do (I did), just sit back and enjoy the ride, which incidentally ends with a cliffhanger. Good thing there’s a season 2 already in the works.

Every family has a story and Nuclear Family director Ry Russo-Young shares hers in this fascinating three-episode HBO Max documentary series. It’s easy to sympathize with every side in this series. Russo-Young herself was just a child with absolutely no power over the adult events threatening to turn her life upside-down. Don’t miss this one, a reminder that there are still plenty of meaningful family stories out there we have never heard.

Combining horror with profound questions about spirituality, ‘Midnight Mass’ is one of the best shows of the year. A seven-episode Netflix miniseries that explores religion and faith with Flanagan’s usual trademarks, prioritizing characters and emotions over cheap scares and shock value. It’s the type of show that will sooner make you teary-eyed over a discussion about the afterlife than jump off your couch from something going bump in the night.

Starstruck is a classic screwball comedy, starring the lovably goofy Rose Matafeo. She plays Jessie, a twenty something Londoner who parties it up on New Year’s Eve, then later discovers she had a one-night stand with Tom Kapoor, a celebrity played by Nikesh Patel. Follow Jessie as she juggles odd jobs, from cinema worker to nanny, and her blossoming relationship with a film star that involves no hijinks whatsoever. Watch out for scene-stealer Minnie Driver as Tom’s agent in this witty, neatly crafted comedy package.

We are Lady Parts

The six-episode series follows an all-female Muslim punk band in the UK. These characters are stunningly different to general representations of Muslim women. They play songs with lyrics like, “Voldemort’s alive and he’s under my headscarf.” You’ll fall in love with the characters, the music and lead Anjana Vasan, whose awkwardness and line delivery are hilarious. A wonderful, feel-good gem.