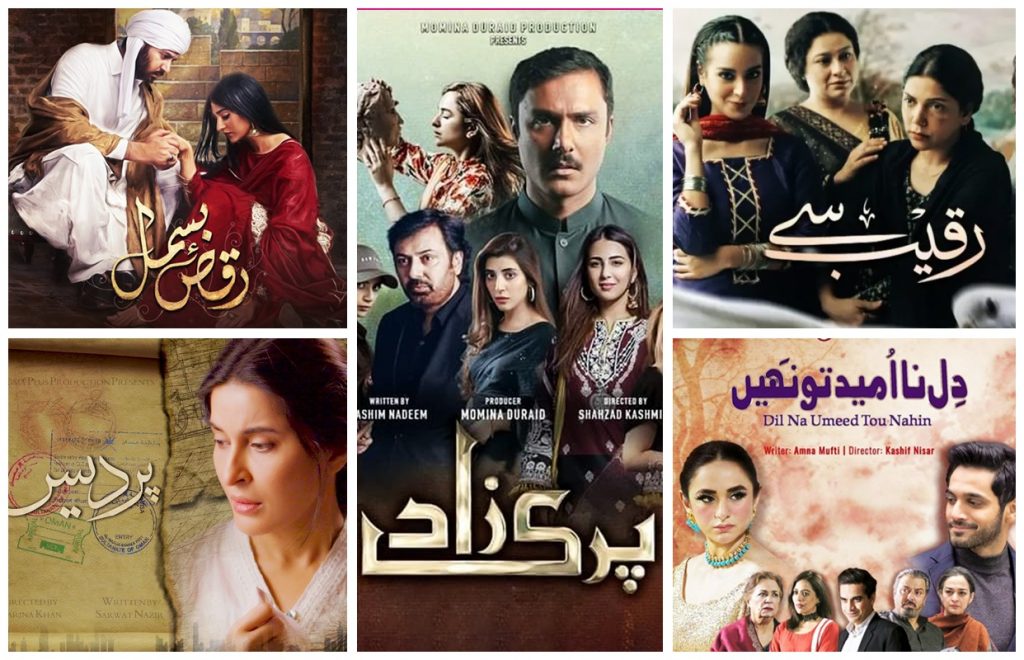 2021 proved to be a great year for the entertainment industry of Pakistan. From tackling social issues to endearing tales of romance to social dramas, viewers showered their love on dramas from multiple genres. As we bid adieu to the year 2021, Fashion Times Magazine brings you the Top 5 Dramas that impressed us. Read on…

With a double episode every week, the Six Sigma Plus Production grew with word of mouth and turned out a big success. First things first, one has to applaud Shaista Lodhi to stand up to the stalwarts like Bushra Ansari and Sarmad Khoosat is no mean achievement and Shaista successfully does that and how! Secondly, the way director Marina Khan handled the simple narrative into the right direction, proved her supremacy as a storyteller. It goes down as one of her best in her repertoire that demands superlative applause. Affan Waheed and Dur-e-Fishan further strengthen the plot to move forward making Pardes one of the top-rated dramas of ARY Digital.

Wajahat Rauf returned to television with a bang with Imran Ashraf and Sarah Khan in lead roles. Raqs-e-Bismil was a remarkable tale of forbidden love backed by proficient direction, spellbinding performances, and superlative writing. It delivered solid drama with a terrific finale. Ashraf as (Moosa) was the lifeline, the strength of the drama. It’s easily his career-best act, eclipsing his earlier works so far. Sarah Khan’s astounding, gutsy performance as (Zohra) will be remembered for long. It won’t be erroneous to state that Raqs-e-Bismil is Rauf’s most accomplished work to date.

The ongoing Parizaad is a gem of a drama that is keeping the entire nation hooked with its intriguing plot. The lead actor Ahmed Ali Akbar delivers his career-best performance and captures the essence of his part wonderfully, while the camera captures every emotion that flickers across his face. Tremendous performances, deft direction, power-packed dialogues and the melodious title track have it all.

Dil Na Umeed Toh Nahi was a mirror reflection of what the murky world of social evils like human trafficking, adolescent prostitution, child abuse, child marriages, and the curse of dowry has come down to. It wasn’t the first time, a drama talked about such harsh realities of life, but it was certainly one of the most pragmatic ones. Written by Amna Mufti and directed by Kashif Nisar Dil Na Umeed Toh Nahi was packed with towering performances by Yumna Zaidi, Naveen Shehzad, Samiya Mumtaz, Omair Rana, Yasra Rizvi, Wahaj Ali, and Nauman Ejaz.

Rarely do we get engaged to a drama right from the first episode to the last. The beauty of Raqeeb Se was its simple tale of complex human emotions that kept viewers savoring it throughout its entire run. Kashif Nisar’s directorial turned out to be a true masterpiece strongly backed up by impeccable writing by Bee Gul. It was hard to pick out a single mistake, everything was just pitch-perfect. The splendid performances by Noman Ejaz, Sania Saeed, Iqra Aziz, Faryal Mehmood, and Saba Faisal made Raqeeb Se hit the bullseye.