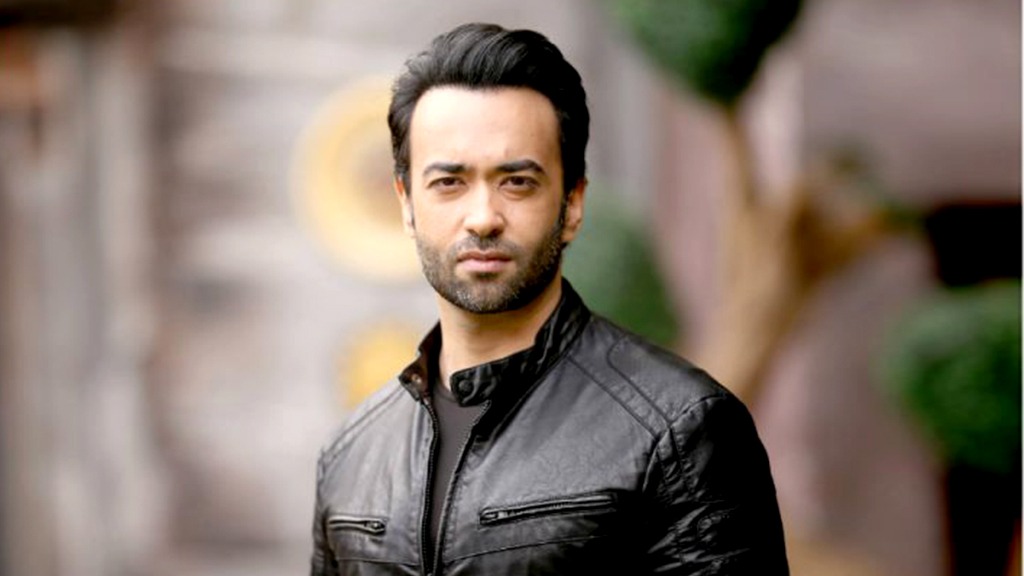 The face of popular band Overload, Farhad Humayun passed away on Tuesday at the age of 42.  He was laid to rest on Tuesday afternoon at the Mian Meer Graveyard in Lahore.

The news of his death was announced on the official social media page of Overload. It requested for a call for prayers. 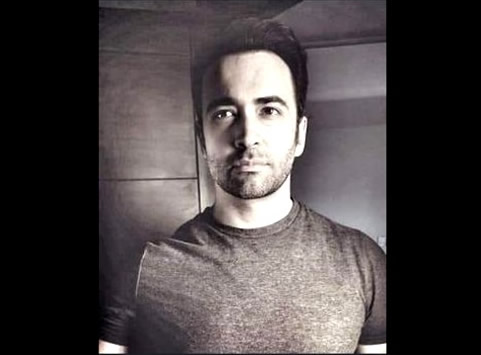 “The magnificent Farhad Humayun left us for the stars this morning. Stoic in the face of challenges, uncompromising in his values, generous to a fault, witty as hell! Fadi was far too ahead of his time, both in spirit and art,” the post read

“He would want us to celebrate his life, so we request his family, friends and fans to honour him and say a prayer for him today,” it continued.

“We can almost hear him say these words by David Bowie: ‘I don’t know where I’m going from here, but I promise it won’t be boring’. Godspeed our gentle giant and thank you for creating a Riot!”

The cause of his death wasn’t mentioned in the post, however in 2018 the musician revealed that he had a brain tumor that was being operated by the “World’s Greatest Surgeon”.  Farhad is survived by his mother, Navid Shehzad, and sisters Sarah Shahzad and Reema Bukhari.

As the news of his tragic death spread, celebrities paid their tributes to the loss.

Popular actor Adnan Siddique was ‘shook’ to know about his death. 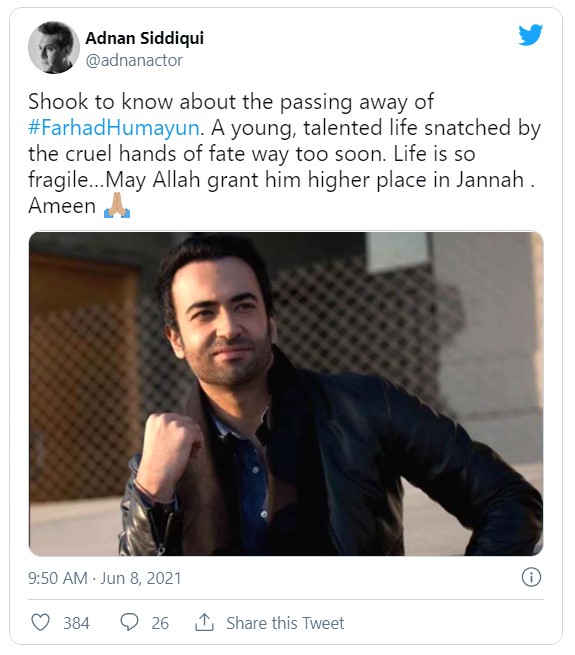 He wrote: “Shook to know about the passing away of #FarhadHumayun. A young, talented life snatched by the cruel hands of fate way too soon. Life is so fragile…May Allah grant him higher place in Jannah. Ameen”

You Tuber Taimoor Salahuddin aka Mooroo called Humayun his musical hero. “I grew up listening to overload, being inspired, electrified and entranced by it. Farhad humayun was my pakistani musical hero through my teenage years. Sad to hear he passed away and suffered with cancer so. He will always be the king of the drums. Allah maghfirat farmayein.” 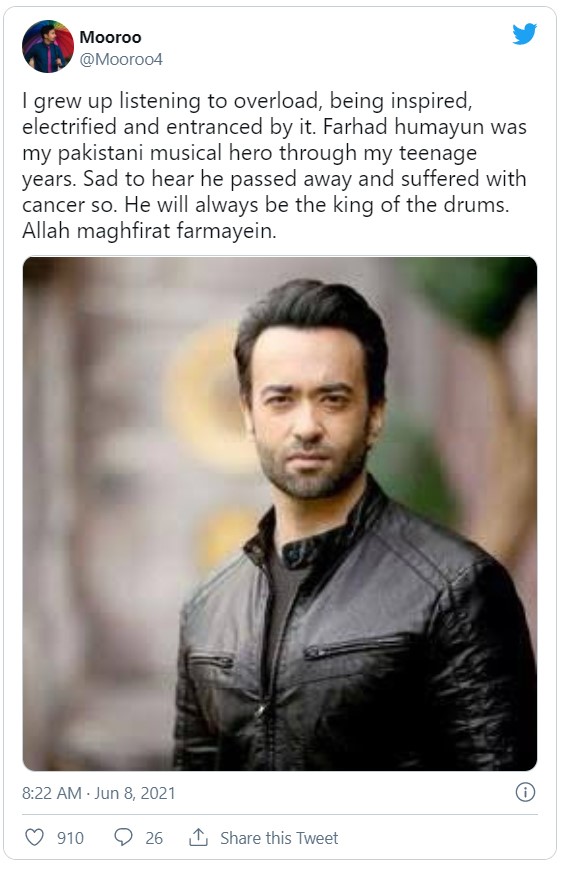 “RIP Fadi,’ the Coke Studio singer tweeted, adding, “Thinking only of the good times we shared. My career in music began with Overload. We were at loggerheads at times but made some undeniably good music on the way. This is just one of those brilliant songs. Sharing this in your memory.” 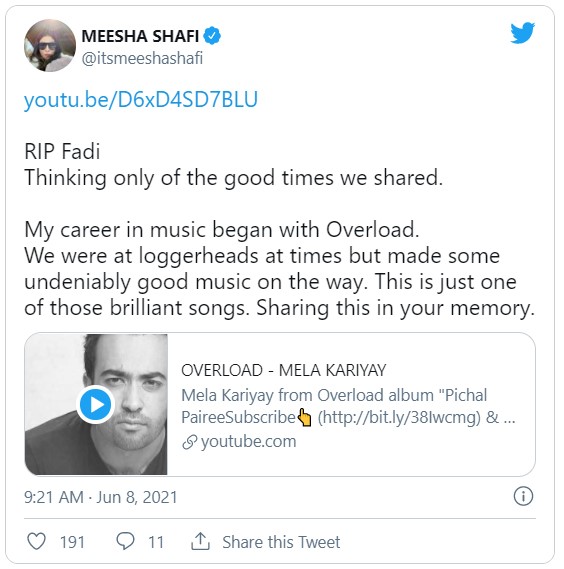 Abbas Ali Khan shared, “RIP peace dear Fadi. Tu kamal tha yaar (you were brilliant). See you on the other side.” 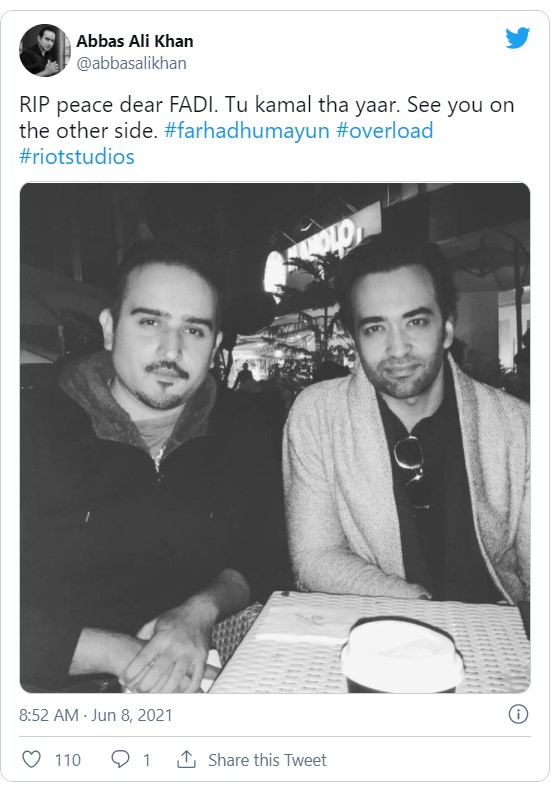 Actor Mikaal Zulfiqar said he was gone too soon. 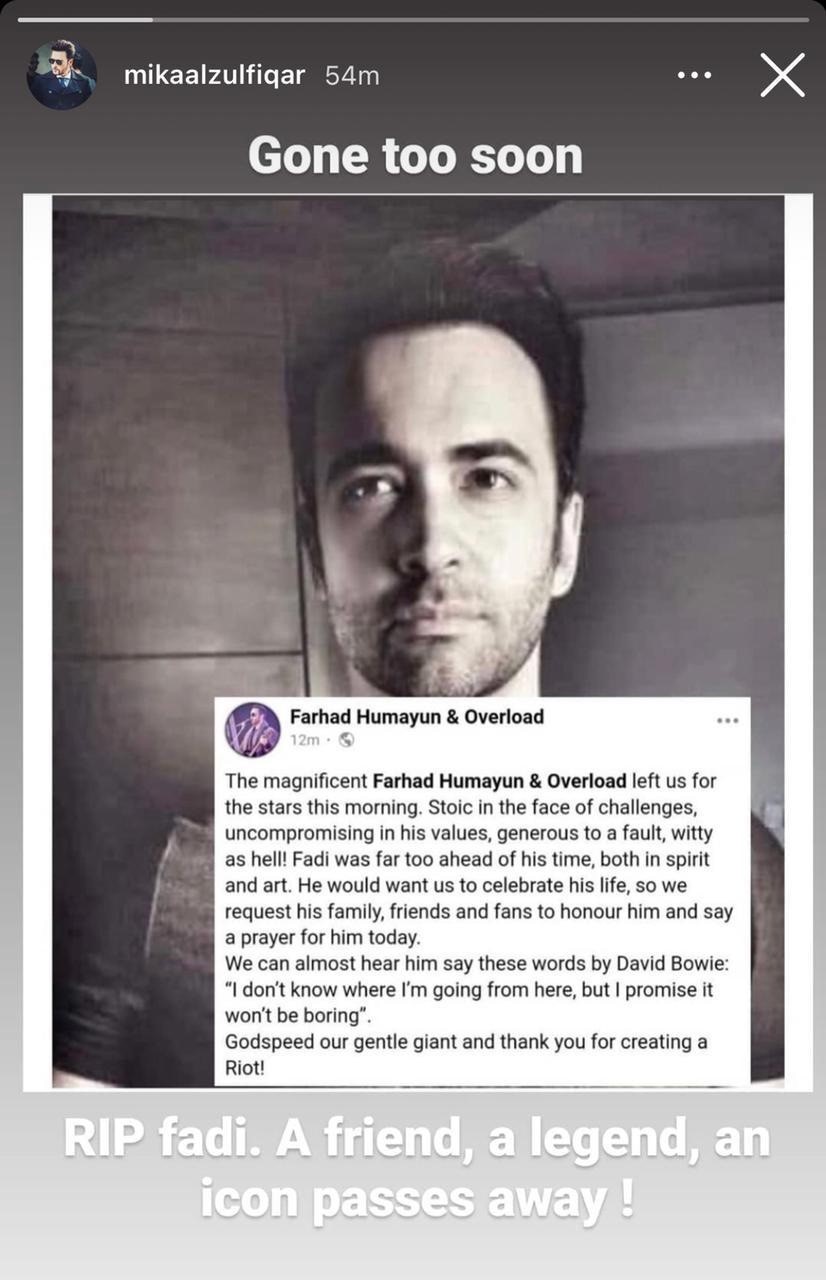 Farhad Humayun was an iconic singer, drummer, record producer and video artist. He was popularly associated with the Pakistani drum jam band Overload that he founded in 2003. He started his career as underground musician and formed two bands Co-Ven and Mindriot in which he played drums. Humayun has won numerous awards and accolades for both his audio & video work and owned Riot Studios, the famous recording studio and gig venue in Lahore.

May his soul rest in peace.