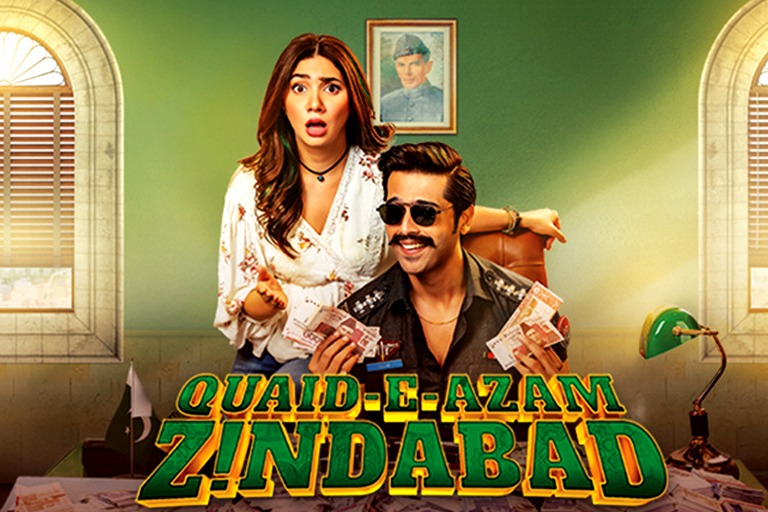 Since the time the first teaser of Quaid-e-Azam Zindabad went on air, for some strange reason, I heard people calling it an adaptation of Bollywood. The sole similarity between Quaid-e-Azam Zindabad and the Bollywood cop flick is the ‘uniform’. Also, it’s a hero-villain drama. But beyond these two factors, there’s no commonality actually.

Quaid-e-AzamZindabad works for varied reasons: The conflict between the protagonist and antagonist, the high-quality dramatic scenes, and the magnificent action. In short, the film works as an entertainer, a complete package and if I may say so, it’s Nabeel Qureshi’s best work so far.

First, the plot line, without giving away the entire story. Set in the backdrop of Karachi, the film tells the story of Inspector Gulab(Fahad Mustafa) a dishonest police officer. He meets Jiya(Mahira Khan) an animal rescuer, and love blossoms between the two. The trouble arises when Gulab’s father played by (Qavi Khan) get to know about his reality. What happens next is a twist that forms the rest of the film.

Director Nabeel Qureshi’s motto is crystal clear; to deliver entertainment in large doses. Quaid-e-Azam Zindabad is an absolute joyride in the first half. Several sequences and witty, sharp one-liners, are sure to bring the house down. There are plenty of real-life issues like political unrest, animal cruelty, demonetization, and exploitation of power. The post-interval portions get serious as the issues depicted demands seriousness. Nabeel ensures that he keeps a tight rein on the writing of the film throughout to keep you completely hooked on the proceedings.

I’d like to make a special mention of the action scenes. The hardcore action is easily among the high points of the movie. On many occasions than one, you have your hearts in your mouths while watching the scenes. All of it makes the film relevant and real that stays with you once the movie has concluded.

The soundtrack (Shani Arshad) gels well with the mood of the film. ‘Loota Rey’ is already a chartbuster, while ‘Dil Karey‘ leaves you awestruck by its melody. The background score deserves special mention. The cinematography is flawless. The action sequences (Mehboob Shah) are vibrant and striking.

As far as the film’s performances are concerned, Fahad Mustafa is the lifeline, the soul of the film and I must add, he proves he’s an all-rounder who can essay diverse characters with superb ease. Quaid-e-Azam Zindabad is sure to multiply his fan following by leaps and bounds.

One expects a lot from Mahira Khan in terms of acting prowess and she doesn’t disappoint. She is excellent, sincere, and entertaining to the T. Nayyer Ejaz is in terrific form. Javed Sheikh is exceptional. Saleem Mairaj is wonderful. Mehmood Asalm is first rate.

On the whole, Quaid-e-Azam Zindabad is a sure-shot winner, with no two opinions about it. The film has a captivating story with a dramatic twist in the tale, the chemistry between the lead actors is perfect and the music is well juxtaposed in the narrative. But its biggest USP is, without doubt, Fahad Mustafa. He carries the film on his broad shoulders. This one will storm the box office. It has Blockbuster written all over it!