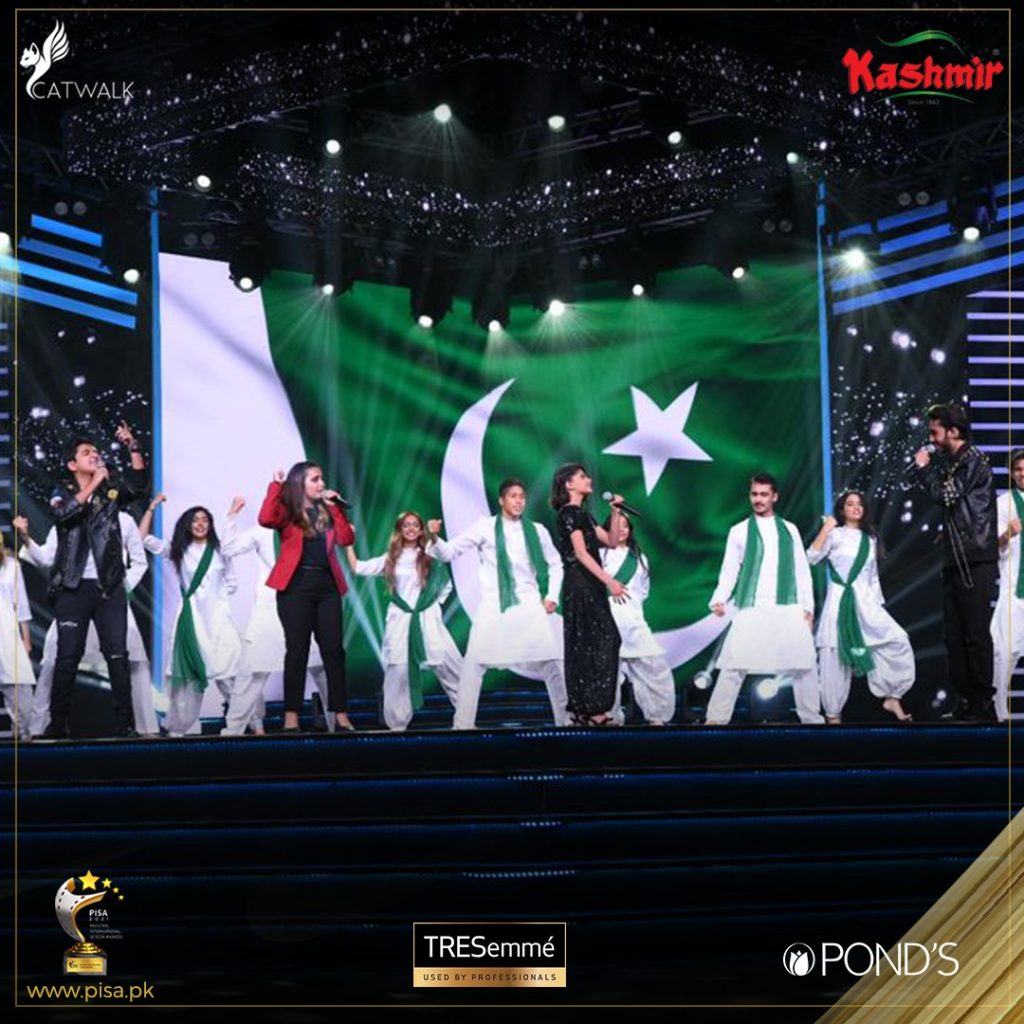 Dubai: November 7, 2021:-
The much-anticipated 2nd annual Pakistan International Screen Awards (PISA ’21)  took place on November 5, 2021 at the majestic Madinat Jumeirah, Dubai organized by Mesmerise Events under the aegis of Founder and CEO Faisal Khan. The Show Director of PISA 2021 was Frieha Altaf, Founder and CEO of Catwalk Event Management, PR & Productions who managed the show direction, Red Carpet and PR for the event.

During a celebrity and glamour-filled evening the organizers of PISA acknowledged the stellar talent of Pakistan’s most celebrated artists from the Film, TV, Music, Fashion and Digital Content industries and bestowed 29 well-deserved awards on an international platform which was enhanced with a bevy of spellbinding and mesmerising performances by some of Pakistan’s most celebrated superstars.

The evening commenced with a warm welcome by co-hosts Vasay Chaudhry and Yasir Hussain and followed by a proudly patriotic and passionate recitation of Pakistan’s National Anthem by supernova singer Asim Azhar.

Yasir and Vasay thanked the audience for attending PISA ’21 and without further ado introduced the stunning opening performances by superstars Mehwish Hayat and Sheheryar Munawar.

Mehwish performed solo to the energetic song ‘Chirrya’ by Neha Chaudhry and Shiraz Uppal from the 2019 Wajahat Rauf film ‘Chhalawa’ in which Mehwish starred. This was followed by an equally invigorating solo performances by Sheheryar to ‘Haye Dil Bechara’ from the 2019 Asim Raza multi-starrer ‘Parey Hut Love’ starring Sheheryar and Maya Ali: and “Shakar Wandaan Re’ from the 2015 Asim Raza film ‘Ho Mann Jahan’ starring Sheheyar, Mahira Khan and Adeel Hussain.

The ante and temperature were raised with the scintillating chemistry of Mehwish and Sheheryar performing together to ‘Munday Lahore De’ sung by Mohsin Abbas Haider and Saima Jahan from the 2018 Nabeel Qureshi film ‘Load Wedding’ starring Mehwish and Fahad Mustafa.

The first Jury award of the evening was for ‘Singer of the Year’ which
was won by versatile powerhouse Aima Baig for ‘Te Quiero Mucho’ and was presented by star couple, singer Umair Jaswal and TV actress Sana Javed who also conferred. The ‘Song of the Year’ shield (by TRESemmé presents Kashmir PISA 2021 and powered by Pond’s) to Bari 2 by Bilal Saeed and Momina Mustehsan.

An exciting and anticipated award was the Critics’ ‘Breakthrough Artist of 2020 which was won by Hasan Raheem and presented by Sajeer Abbas.

The well-deserved ‘PISA Rock Star’ honorary accolade was bestowed to Pakistan’s ultimate Rock legend Ali Azmat by Ahmed Ali Butt for whom Ali had expressed his love and admiration along with a faux fun sparring match earlier on the Red Carpet!

Equally prestigious was the honorary’ PISA Youth Icon’ of the Year Award’ which was conferred to Rock supernova Umair Jaswal by music legend Sajjad Ali against the backdrop of Umair’s title song from his travel documentary ‘Raahi.’

The next set of awards were the ‘Social Media Awards’ hosted by content creator and Social Media whiz and commentator Waqar Zaka. Celebrity couple, actor/director Yasir Nawaz and actress/ morning host Nida Yasir presented the ‘Most Entertaining Instagram Celebrity award to Romaisa Khan who has 1.7 M followers on the social media platform’; and the ‘Best Use of Humour in Social Media’ award to CBA Arslan Naseer (Comics by Arslan which has 1.15 M subscribers on YouTube respectively.

The highly competitive ‘YouTuber of the Year’ trophy was presented to the very popular Ducky Bhai who has 2.84 M subscribers on YouTube by supermodel Fahmeen Ansari; while actor Omair Rana presented ‘Vlogger of the Year’ to Shahveer Jafry who has 3.04 M subscribers on YouTube. To round off the Social Media awards actors Hiba Bukhari and Affan Waheed gave out the ‘Tik Toker of the Year’ accolade to Jannat Mirza who has more than 16.8 M followers and over 445 M Likes on the video sharing App Tilk Tok.

Co-hosts Vasay Chaudhry and Mehwish could not control their excitement as they introduced a rollicking medley performance by Rock star Ali Azmat of his popular hits. Ali’s riveting and emotive vocals inevitably brought the house down.

The glamour and glitz continued with the revelation of the Fashion Awards. The first two Fashion awards, ‘Bridal Couture Designer of the Year’ were handed out by Mrs. Faisal Khan of Mesmerise Events and Azerbaijani model Uksana, firstly to “The King of Technicolour”, couturier Nomi Ansari; and then the ‘Prêt-à-Porter Designer/Brand of the Year’ award to internationally-recognized powerhouse Khaadi.

The Turkish stars received their honorary awards due to the unprecedented popularity of the 2014-2019 series’ and its worldwide influence, which still endures and reverberates even after it concluded in 2019.

Co-hosts Mehwish and Yasir introduced the fourth act of the evening; a mesmerizingly hypnotic ballet meets Khathak dance performance gracefully rendered by actress Faryal Makhdoom followed by an elegant solo dance recital to a Madame Noorjehan song by Amar Khan and  finally a rhythmic pas de deux by the pair and a bevy of back-up dancers, after which Mehwish announced the Drama Award categories.

Co-hosts Mehwish and Yasir enthusiastically announced the next scintillating and rousing medley performance by rock star Umair Jaswal which had the audience singing along jovially and at a cute juncture, his wife, actress Sana Javed dancing with Umair briefly.

Vacillating co-hosts Yasir and Wasay then announced the next set of TV awards.

Popular TV stars Sonya Hussyn and Feroze Khan presented both the Best Supporting Actress award to Hina Altaf for ‘Bandhay Aik Dor Say’ and the ‘Best Supporting Actor’ award to  Ahmed Ali Butt for ‘Jhooti’ respectively to encouraging audience applause.
The TRESemmé presents PISA 2021 and powered by Pond’s ‘Best TV Actress Critics’ Award  was presented to a surprised but grateful Sonya Hussyn for her role in ‘Saraab’. This was Sonya’s 17th nomination and first ever win for an acting role for which she rendered a highly emotional acceptance speech.  Similarly, the ‘Best Actor Critics’ Award’ was awarded to Mohib Mirza for his powerful role in ‘Dushman-e-Jaan.’

Following these momentous awards co-hosts Yasir and Wasay announced one of the most anticipated performances of the evening: a medley by veteran music legend Sajjad Ali including classic hits including ‘Cinderella’; ‘Ravi’ and ‘Har Zulm Tera Yaad Hai’ which left the audience nostalgic and energised, especially the celebrity crowd with whom Sajjad Ali interacted off-stage.

The highly coveted ‘Best Actor Popular’ award was bestowed to Feroze Khan for ‘Ishqiya’, who offered an appreciative acceptance speech.
The last award of the evening for ‘Best TV Actress Popular was handed out by Mian Shahzad Khalid and Amar Khan to Sara Khan for her performance in ‘Sabaat.”

The auditorium exploded with energy with celebrity audience members getting on their feet when veteran great Sajjad Ali end- noted the evening with the nostalgic finale number ‘Mahiwal’ which was first released in 1995.

Most Promising Model of the Year
RECIPIENT: Faiza Ashfaq

‘Song of the Year’ Award
WINNER: ‘Bari 2 ‘ by Bilal Saeed and Momina Mustehsan