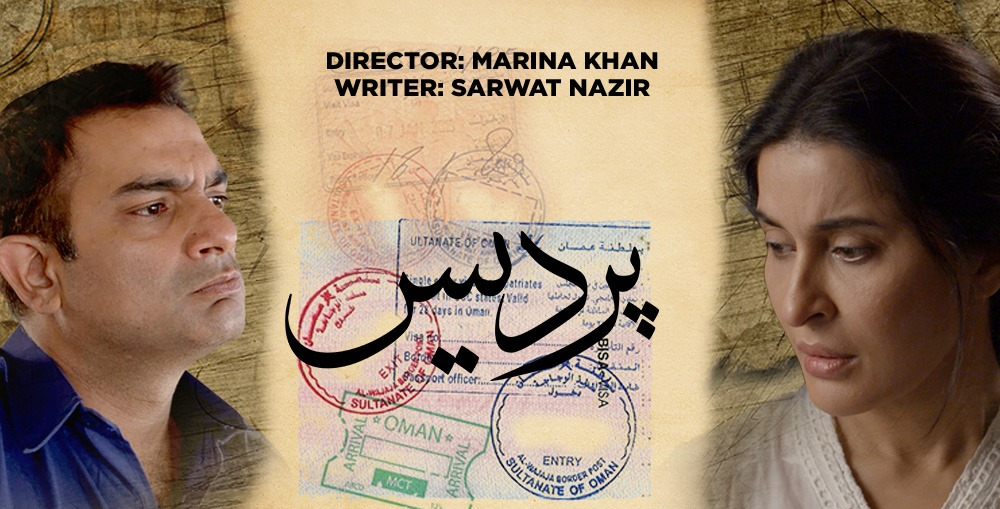 With every project, ARY Digital takes the viewer’s expectations to a higher altitude. And the hopes from the drama serial ‘Pardes’ are no less. Ever since the initial teasers were released, the hi-octane drama creatively tangled in the screenplay, the heart-melting emotions, the alluring OST, and the electrifying chemistry between the star cast caught the attention of one and all. So did the show meet expectations? Let’s Analyze

The premise: ‘Pardes’ takes off with a household of the ’90s headed by Mumtaz (Bushra Ansari). She is the mother of two sons Ahsan (Sarmad Khoosat) and Asim (Gohar Rasheed). Mumtaz also has two daughters of which the elder Nabeela (Faiza Gillani) is married and the younger Aliya is completing her studies. Ahsan is married to Zubaida (Shaista Lodhi) and they have a six year old daughter. They live a very low-key life as their financial situation isn’t stable. Ahsan is the bread and butter winner of the house, whereas Asim is simply good for nothing. He is a spoiled brat who doesn’t want to work; he aims to do his own business for which he doesn’t have any capital. Zubaida is a caring daughter-in-law who looks after all the household responsibilities.

One fine day Mumtaz tells Ahsan to find a job abroad so that their financial situation would get better. He refuses as he doesn’t want to leave his family and live alone. Meanwhile, Asim who is having an affair with his uncle Siddiq’s (Mohammad Ahmad) daughter ‘Noshi’ is finally caught. A havoc is created, Siddiq gives an ultimatum to Mumtaz that they have just two weeks for the wedding or else he will shoot both Noshi and Asim. She agrees to it without thinking that how will this be possible. Mumtaz asks Zubaidato give her wedding jewelry to Noshi, which she does. Ahsan is not happy about all this. The twist in the tale comes when Ahsan’s daughter suffers a minor hand injury and he doesn’t have money to get her treatment from a good hospital. He finally decided to go abroad without informing anyone. He gets a job in Muscat; he sells his bike for the ticket and visa. Zubaida is shattered after this news, she can’t think of living without Ahsan.

The entire selfish family is happy as they have their eyes on Ahsan’s income. Ahsan finally leaves for Muscat. Soon after, the news of Zubaida being pregnant comes across. Mumtaz isn’t happy about this. Asim tells his mother not to inform Ahsan about this as he will leave everything and come back. The cheap antics of Mumtaz continue as she doesn’t take Zubaida to the doctor. Noshi too doesn’t have a healthy relationship with anyone in the house. The episode ends on an emotional note when Zubaida gets a chance to talk to Ahsan.

The Directors Cut: The supremely talented Marina Khan emits the right signals that she promised with the first look. She stirs the audience’s imagination by attempting a tale of many Pakistani’s who have to work abroad for the bright future of their families. Khan along with her writer Sarwat Nazir embellishes the play with intriguing characters and inspiring sub-plots. She makes sure that the writing is tight; the pacing is right and at no point does the narrative deviates into unnecessary tracks. She handles her performers with compassion and intelligence.

The Dream Cast: One of the highpoints of ‘Pardes’ is, undoubtedly, its lead actor Sarmad Khoosat. He sheds his inhibitions and delivers a flawless performance. The crackling chemistry between Khoosat and Lodhi as seen in the promos surely got many hearts emotional. There’s always a new vibe when viewers watch something new on-screen. It provides them with a break from the tried and tested pairing. It even helps actors to bring out their fresh side. We can’t wait to witness their track in the upcoming episodes.

In a big project where each actor plays an important part to take the narrative forward, the supporting actors need to be good. And they are! Bushra Ansari’s portrayal as Mumtaz deserves brownie points. Gohar Rasheed’s presence is refreshing. Mohammad Ahmad is dependable.

Final word: ‘Pardes’ succeeds in evoking emotions; it’s a refreshing experience backed up by a wonderful script, good actors, and great directions. It will be interesting to see how the narrative unfolds and balances its pace in the upcoming episodes.