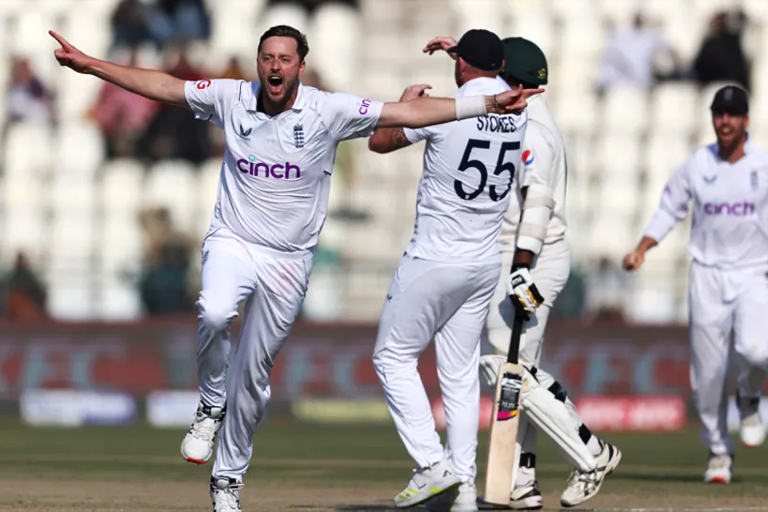 England defeated Pakistan by 26 runs in the second test in Multan. The English men have an insurmountable 2-0 lead in the three-match series. This marks England’s first series win in Pakistan for 22 years. The first time they have won two matches in a series here – is also their most emphatic on the subcontinent, given their opposition and unfamiliarity with conditions.

Green shirts were chasing a total of 355 to win but were bowled out for 328 in the second session on day four of the contest. Saud Shakeel led the scoring charts for the hosts, scoring 94 runs while Imam-ul-Haq (60), Mohammad Nawaz (45) and Abudllah Shafique (45) also played important knocks. With the 2nd Test defeat, Pakistan has also lost the 3-match Test series 0-2, with one match still to go. For England, Mark Wood was the pick of the bowlers, producing figures of 4/65.

Pakistan was dominating Day 4 until the Pope catch controversy happened. There’s no denying that the dismissal of Saud Shakeel turned the match in England’s favour. Joel Wilson upheld the on-field decision of out but Pakistan may have grounds to feel aggrieved.

Shocking decision…@saudshak wasn’t out in my opinion 🤔 #PakvsEng2022

I will go down in the grave convinced Saud’s was a harsh decision. He was not out & this turned the complexion of the match. Nonetheless, Saud has smacked a few who delayed his arrival in Tests for at least four years. He is a real product. @saudshak more power to you. 💪

“Clearly not out” says Waqar Younis on that Saud Shakeel decision. pic.twitter.com/WgdpjPZeS4

The skipper accepted the controversial decision  as part of the game. “It looked to us as if the ball had touched the ground. We felt the ball had been grounded. As professionals, we need to respect and follow the umpire’s decision. We made mistakes as a team.” he said.

Looking Forward For A Fair Game In Karachi

This series has been entertaining from day one and England deserves so much credit for making it such good viewing with their approach. Test cricket is thinly supported in Pakistan but the crowds have been decent and both games have caught the imagination. The third and final Test begins in Karachi on Saturday, hoping for a fair game of cricket.