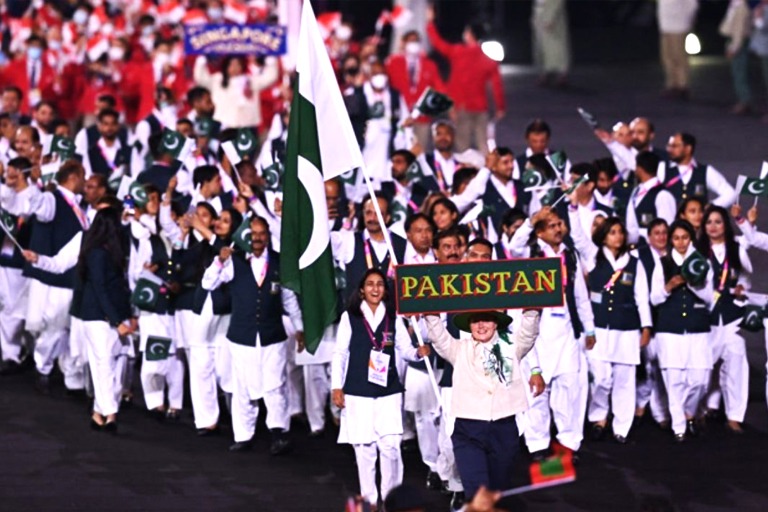 As the Commonwealth Games, of 2022 came to an end, Pakistan secured 18th position out of 72 nations with a total of 8 medals including 2 golds. Even though Pakistani athletes had no training, infrastructure and support from the local authorities, they continued to shine and won big. Let’s decode in detail.

Weightlifter Nooh Dastagir Butt bagged the maiden gold medal with a record lift of 405kg. This is the first gold for Pakistan in any category in the ongoing games in the United Kingdom city of Birmingham.  Interestingly, Nooh Dastagir Butt dedicated his achievement to his father as he trains him at home.

Noor dastagir Butt you are our pride ❤️
🇵🇰👑#CommonwealthGames2022 pic.twitter.com/YDSDxcevoH

Pakistani athlete Arshad Nadeem made new records and won a Gold medal in a Javelin throw event after throwing at 90.18 meters to clinch Gold for Pakistan. For the unversed, Arshad won Pakistan’s first Gold medal in Commonwealth Games athletics since 1962. Twitter was ecstatic after Arshad achieved the rare milestone and reacted with massive praises for the 25-year-old.

We are proud of your Commonwealth Games record throw of 90.18 metres to win a gold medal for your country 🇵🇰🏅#B2022 pic.twitter.com/oAI2AfIaCY

Salute to you my brother #ArshadNadeem for bringing another gold for Pakistan in #CommonwealthGames2022.

Tahir was defeated by India’s Naveen Naveen in Men’s Freestyle 74kg wrestling event to finish with a silver medal, while Asad won against New Zealand’s Suraj Singh within 55 seconds to win a bronze medal in the Men’s Freestyle 57kg category.

Pakistani wrestlers Muhammad Inam Butt and Zaman Anwar won two silver medals after being overpowered by rival athletes in +86- and +125-kilogram categories. Prior to that, another wrestler, Inayatullah, secured a bronze medal in the +65-kilogram competition.

The hosts England finished at the second position, just two medals shy of the leader Australia, with 176 medals including 57 gold, 66 silver, and 53 bronze. The international event remained majorly dominated by Australia as the Kangaroos claimed 178 medals including 67 gold, 57, silver, and 54 bronze. Arch rival India claimed 61 medals, comprised of 22 gold, 16 silver, and 23 bronze and also remained the top Asian country in the standings.

Without proper training and stuff, the Pakistani athletes have won gold. It’s high time that the government and sports federation should wake up and smell the coffee. The Paris Olympics and Commonwealth Games are scheduled in 2024 and 2026 respectively. We need to fully train our people to win big and make Pakistan proud.