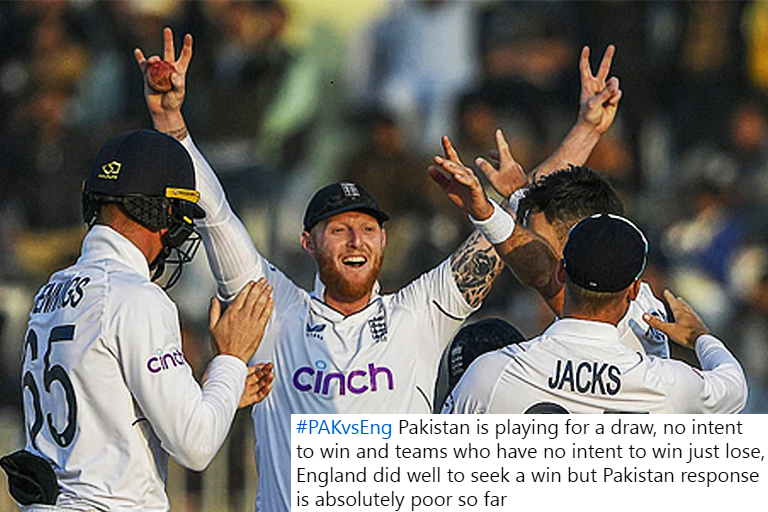 Team Pakistan missed out on a big opportunity to beat England in a home Test match after the local crowd gave them a chance from nowhere in Rawalpindi. England defeated Pakistan by 74 runs in a thrilling first Test of the three-match series at Rawalpindi Cricket Stadium. Fans are not happy with the Green Shirts’ performance. They claim that the team intended to draw the match instead of winning and are fuming over the batting lineup.

The English Skipper Ben Stokes won the toss and opted to bat first. England scored 657 runs in their first innings that included a world record of 500 or more runs on the first day of a Test match. In reply, Pakistan put a good total of 579 in response. In their second innings, England surprisingly declared at 264 for 7, setting a 343-run target for Pakistan before the chasing side was bowled out for 268.

Yesterday Ben Stokes took a brave decision to declare the inning Just for the sake of match result (whatever in favor of them or against them) but today Pakistani batters trying thier best to draw the match.🤦🤦🤦
Looks like Ben effort will go to vain.#PAKvsEng

This is very frustrating to see!

Pakistan not able to put up a fight even after such a declaration from England on this pitch.

#PAKvsEng Pakistan is playing for a draw, no intent to win and teams who have no intent to win just lose, England did well to seek a win but Pakistan response is absolutely poor so far@aaliaaaliya @adeel_azhar

It was a historic moment for England on the back of some exceptional bowling and decision-making by Ben Stokes on the final day as fans erupted in joy. “Test cricket is the best cricket,” was the general sentiment on social media with even the fans from Pakistan heaping praises on Stokes for his brave captaincy. The snapshot of the entire team of England closing in on the Pakistan batters went viral moments after the epic Rawalpindi Test. 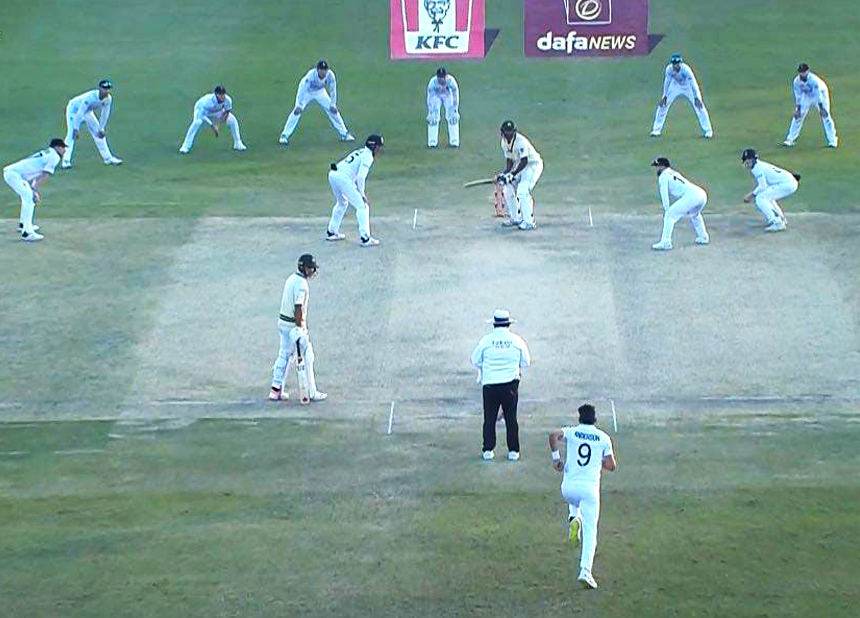 Cricket enthusiasts were hoping for an easy win, but this is what they were met with.

All they need 2 wickets & game belongs to England 🏴󠁧󠁢󠁥󠁮󠁧󠁿

Defensive Mindset will not save us, unless Pakistan Batting lineup do some wonders!#PAKvsEng

Pakistan never though of winning rather they went to draw.
But England is going to win as they deserve.#PAKvsEng

Pakistani batters trying there best to draw this match. It is useless to criticize these players eventually the domestic structure is the biggest culprit which is producing defensive mindset. PCB needs to inject the positive intent in domestic structure. #PAKvsEng

Get this management out first ASAP #PAKvsEng

Who will tell Pakistan team that offense is the best defense. Going for win may result in a draw but going for a draw will definitely result in a defeat #PAKvsEng

England lead their first Test series in Pakistan in 17 years 1-0 with Multan and Karachi scheduled to host the remaining two games.

Do you think team Pakistan strategized the match to the best of its capabilities?