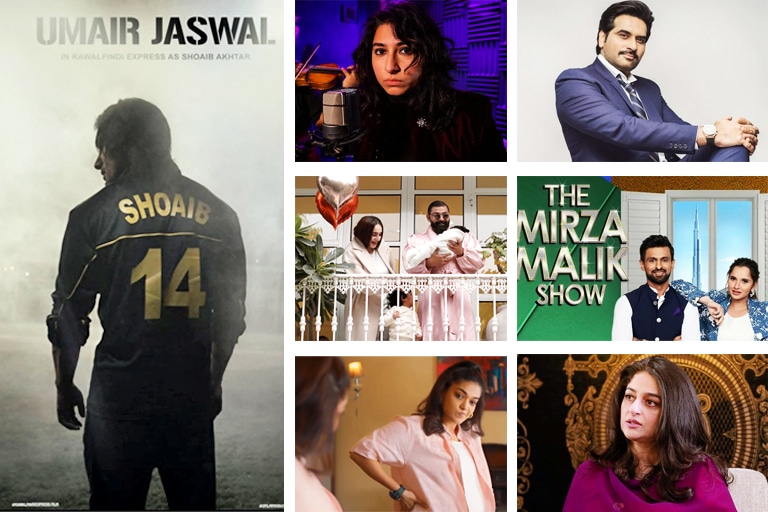 The entertainment industry of Pakistan is buzzing at a steady pace. We at Fashion Times Magazine have curated a group of top stories that trended in the week gone by.

Sanam Jung’s Next Highlights The Horrors Of Body Shaming

Pakistani society always has something to say about body shaming without realizing its impact on people and even their health. HUM TV’s Pyari Mona will feature Jung as a plus-sized woman who is constantly expected to fit in molds and be measured according to specific standards. The actor took to Instagram and shared the first teaser of the show. She wrote, “Playing Pyari Mona was quite challenging not only as an actor but also because our industry has very stringent standards of how a woman should look, especially when she’s the lead.”

Umair Jaswal’s first look from Shoaib Akhtar’s biopic is out and honestly, it is tough to recognize if that is Umair or the former cricketer himself. The singer turned actor shared a poster of himself wearing Akhtar’s number 14 jersey. “I’m honoured to play the living legend, Mr. Shoaib Akhtar on the big screen in Rawalpindi Express. With Allah’s blessings may we succeed in our endeavours. We look forward to bringing to you a first of its kind biopic film worthy of worldwide recognition,” the ‘Gagar’ singer announced. The film is scheduled to release on November 16, 2023.

BISMILLAH
Super excited to announce this with all of you 😊 honored to play the living legend, Mr. Shoaib Akthar on the big screen in RAWALPINDI EXPRESS
With Allah’s blessings may we succeed in our endeavours. Aameen . #rawalpindiexpress #umairjaswal #qfilms @shoaib100mph pic.twitter.com/3YruNBxJPX

Shaan is busy promoting his comeback vehicle Zarrar. During a promotional event, the Arth actor took an obvious dig at fellow co-star Humayun Saeed. He said that Pakistani films need to move on from rom-coms like Punjab Nahi Jaungi and London Nahi Jaunga and explore other genres as well. Saeed took to Twitter and replied with grace, “Idhar bhi jaonga aur udhar bhi jaonga… Aur Zarrar dekhne bhi jaonga [I’m going to go here and there and also to watch Zarrar]… Zarrar releasing on 25th November! All the best Shaan bhai. he wrote”

Being a woman in our society is not a cakewalk! You will be told how to live your own life because people assume it’s okay to poke their noses into others’ lives and dictate their choices. Recently, when Nadia Jamil shared her opinion of Saim Sadiq’s Joyland to get a theatrical release, the Dur-e-Shehwar actor was bombarded with the most indecent and immoral comments by users on social media. Nadia being Nadia was calm, and responded them with kindness, but did use the block feature when required.

Urduflix Drops The First Poster Of The Mirza Malik Show

Post-divorce speculations cricketer Shoaib Malik and Indian tennis star Sania Mirza turn host with The Mirza Malik Show. The duo announced the show last year in a press conference in Dubai and expressed their interest in doing new ventures together. The show is yet to get a release date. 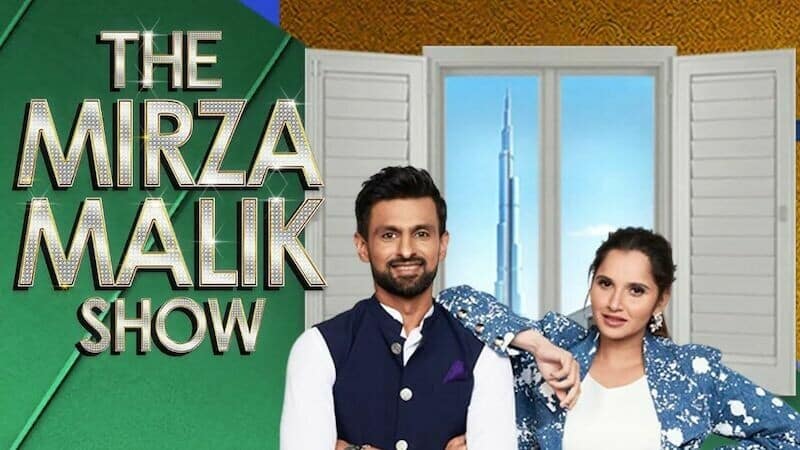 Ace fashion designer Ali Xeeshan has been blessed with a daughter. And she’s adorable! The designer shared a photo of his family and has decided to name her daughter Sushana. Xeeshan, who is already a father of a boy Jansher, used social media platforms to briefly chronicle his happiness. “Today I mark myself as the luckiest man because I am blessed with a baby girl.” Attaching the pink ribbon and evil eye talisman emoji, he wrote in the caption, “Giggles, curls, ribbons and bows! Our adorable baby girl is here making us the happiest. He wrote” 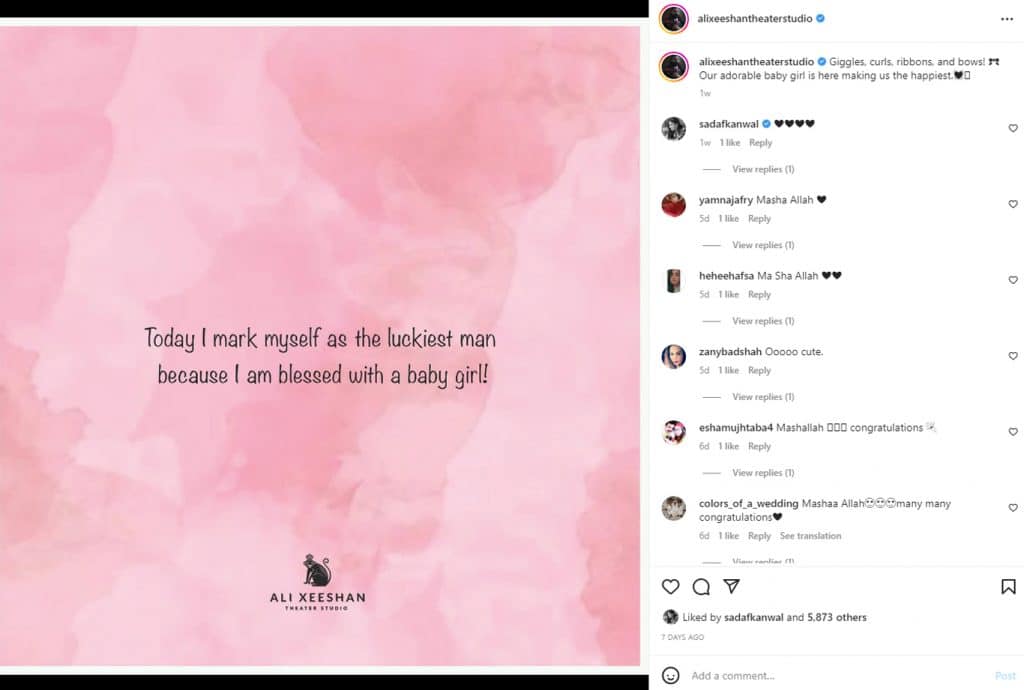 Grammy Nominates Arooj Aftab For The Second Time In A Row

Singer Arooj Aftab is on a roll. The musician is making the country proud as she yet again bags a nomination at the Grammys for the second year in a row. She has been nominated for her song ‘Udhero Na’ with Anoushka Shankar. Aftab shared the news of her nomination on her Instagram, where she posted a screenshot of New York Times, announcing her nomination with the caption, “oh my oh my oh my.” The 65th Annual Grammy Awards will be telecasted live on February 5, 2023 on CBS from L.A.’s Crypto.com Arena after voting on the nominations which will take place from December 14 through January 4. 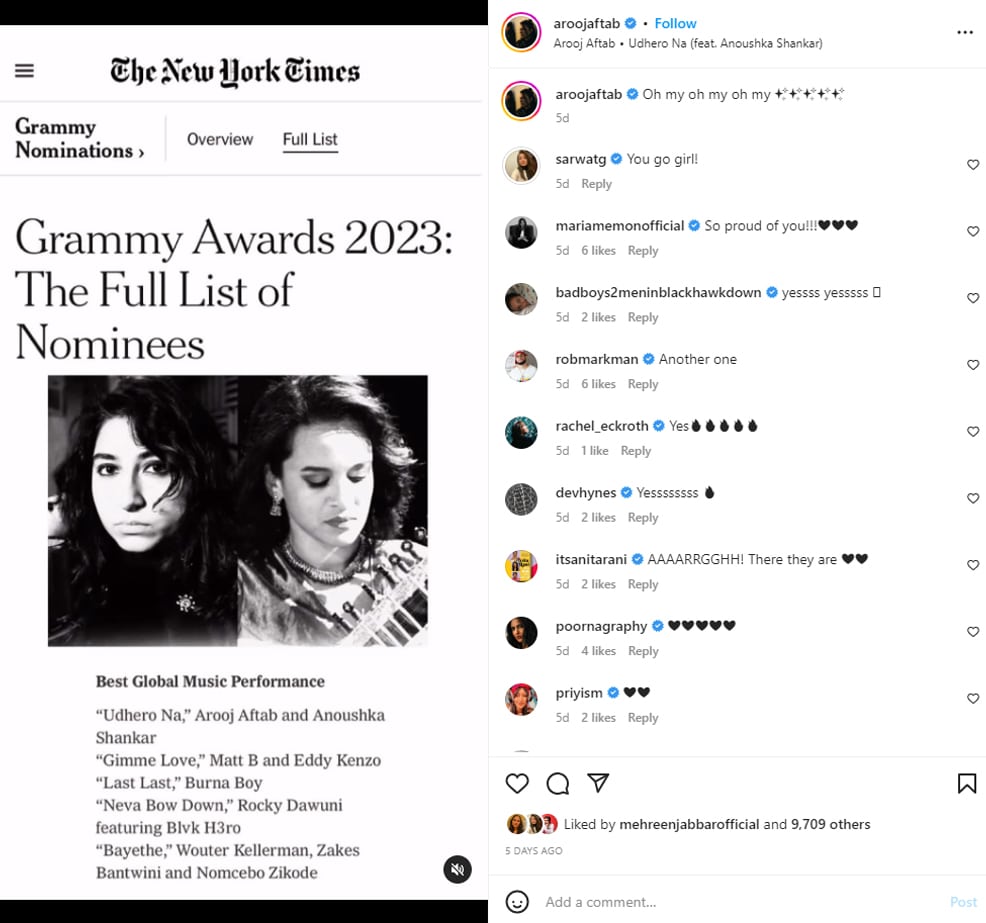