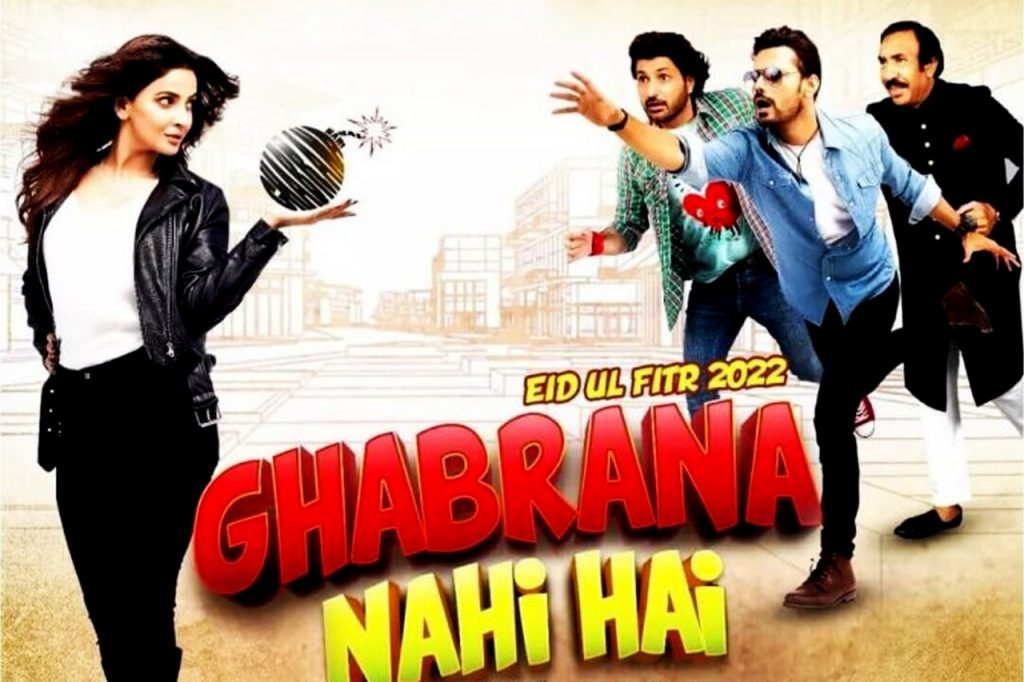 The genre of masala entertainers has been re-visited again and again. So much so that all of them look, seem, and sound alike. But GhabranaNahiHai, helmed by debut director Saqib Khan, takes a fresh look at hardcore masala entertainers.

Frankly, the story of GhabranaNahiHai isn’t new, but Khan’s execution of the subject takes it to another level altogether. Also, for a mass entertainer to work wonders, it ought to have germs to make the viewer jump with joy and participate in the goings-on. And the principal characters here Saba Qamar, Zahid Ahmed, and Syed Jibran are so real, so natural, so believable and so winsome that the viewer gets absorbed into their world as minutes pass by.

GhabranaNahiHai is a roller coaster ride that narrates the story of Zuby (Saba Qamar) who lives with her parents in Faisalabad. One day her father played by Sohail Ahmed visits Karachi to sell his plot, he gets the biggest shock of his life to know that it has been grabbed by land mafia. Another project has been constructed by the mafia management that works for the evil Bhai Miyan (NayyerEjaz). He is so powerful that no one could dare to compete with him. To seek justice Zuby decides to go to Karachi.

She goes to the police station to file an FIR, where she meetsSikandar (Zahid Ahmed) a corrupt police officer deployed by Bhai Miyan. Love at first sight blossoms for Sikander as he is in awe of Zuby’s beauty. Things however take a u-turn when he comes to know that the FIR complaint is against Bhai Miyan. To spend more time with Zuby, Sikander fools her with a fake investigation. Vicky (Syed Jibran) is Zuby’s cousin who wants to marry her. He is suspicious about Siknader intentions and secretly investigates the matter. Will Vicky succeed in doing so? Will Zuby get to know about Sikander’s truth is what forms the rest of the film.

Does it live up to the expectations?

Ever since the time the trailer of GhabranaNahiHai was out, it had only upped the curiosity of the viewers. The film, in totality, is worth the audiences’ expectations.  The film’s taut screenplay (Mohsin Ali &Saqib Khan) makes it very realistic and extremely relatable. The film’s dialogues (Mohsin Ali) are really vibrant and its situational one-liners will surely find resonance with the audiences. GhabranaNahiHai, oozes universal appeal in abundance. The film will surely be liked by all the age groups (majorly by youth).

Saqib Khan deserves brownie points for handling the subject with such maturity. The fun-laden scenes are truly funny and the emotional ones make you moist-eyed. Striking the right balance between light and heavy moments is akin to walking on a tight rope and Khan handles the two extremes with remarkable ease. The DOP Asrad Khan does full justice to Saqib’s vision. Editing by HunainShamim is watertight.  However, music of GhabranaNahiHai is a big letdown. ShujaHaider disappoints big time. Jhanjariyacomes across as the only likable number.

Saba Qamar excels in the role that seems to be tailor-made for her. She happens to be the nucleus of the film and takes to her role like a fish to water. Zahid Ahmed on the other hand is extremely convincing. The chemistry between Saba and Zahid is superlative, so much so, that people will forget their last hit TV collaboration Besharam. Full marks to Syed Jibran to charm the audience with his impeccable comic timing. There are many scenes in which he towers as an actor. NayyerEjaz as Bhai Miyan is noteworthy. Afzal Khan does a fine job. Salem Mairaj is simply marvelous and in fact, walks shoulder to shoulder with Zahid towards the second half.

On the whole, GhabranaNahiHaiis a complete Eid package for the masses and devoted fans of masala movies.  At the Box-Office, the tremendous hype, combined with the festive period and an extended weekend will translate into amazing returns for the makers. Strongly recommended! Go with your family!