Met Gala 2021: Stars Who Ruled The Red Carpet With Panache! 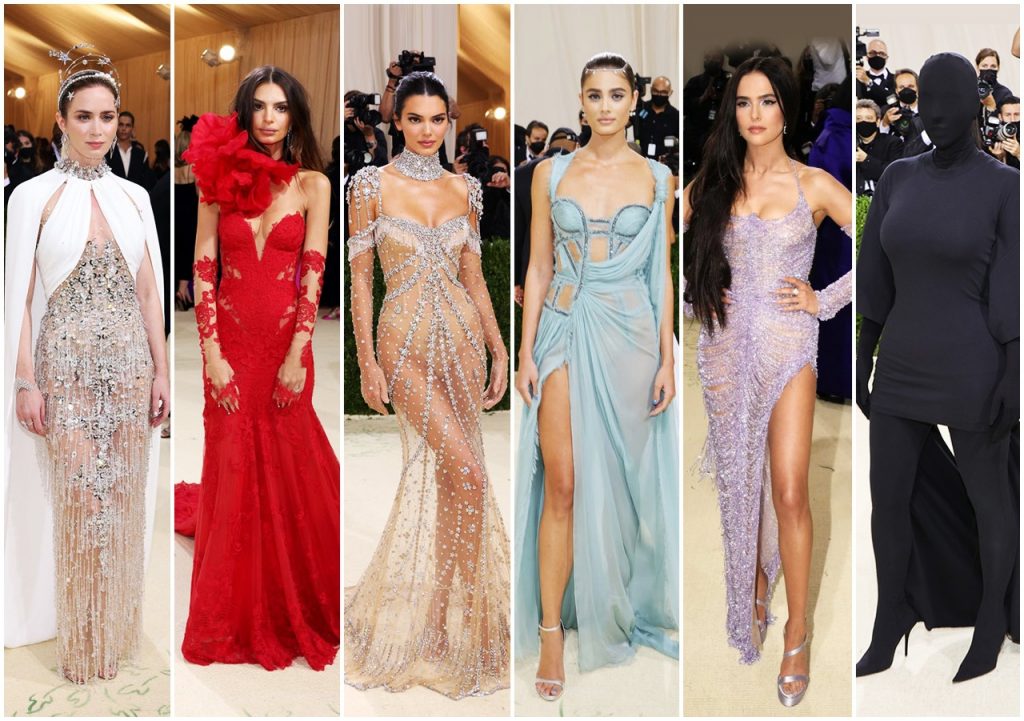 The biggest fashion night, the Met Gala 2021 is upon us again, after the pandemic canceled last year’s event. Every Met has its own theme, and 2021 honored the ingenuity of American style. Instead of wearing just another designer label, the looks of the guest had to reflect the American sartorial spirit. By far, this year’s red carpet has been the most daring and unpredictable. From Billie Eilish’s Oscar de la Renta gown, Grace Kelly’s sparkling catsuit to Kim Kardashian‘s Balenciaga gown, the larger-than-life dramatic pieces were in perfect sync raising the lexicon of American Fashion.

If you missed the coverage of the Met Gala 2021 red carpet, Fashion Times Magazine has got you all covered.

Kendall Jenner wore a naked dress by Givenchy. Her glittering dress featured a diamond choker with a simple bun. 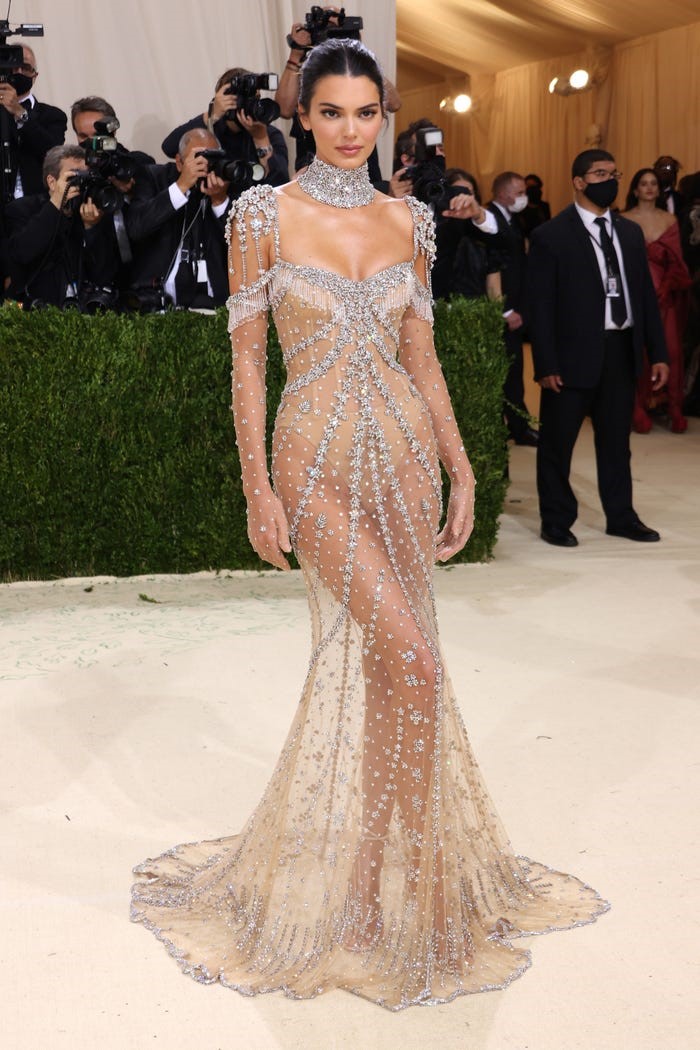 Zoë Kravitz bared it all in a beautiful Saint Laurent dress. The custom-made gown had a matching crystal thong. She accessorized it with simple diamond earrings paired with black heels. 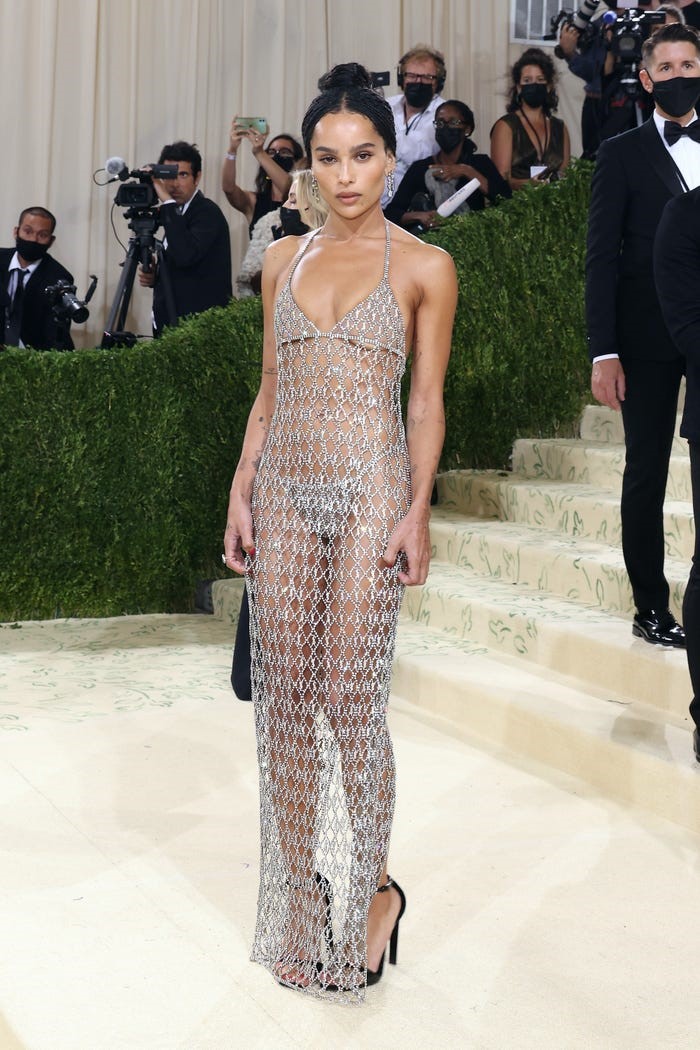 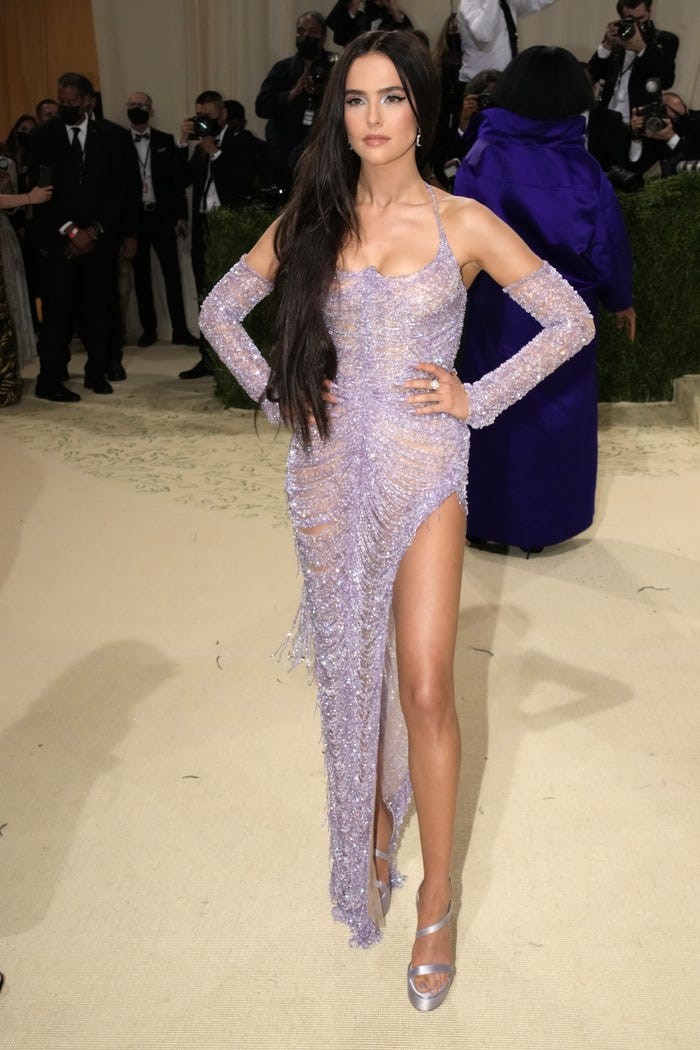 Model Imaan Hammam opt for a daring Versace gown to the Met Gala. Her printed dress had a completely sheer bodice and featured a tulle skirt. 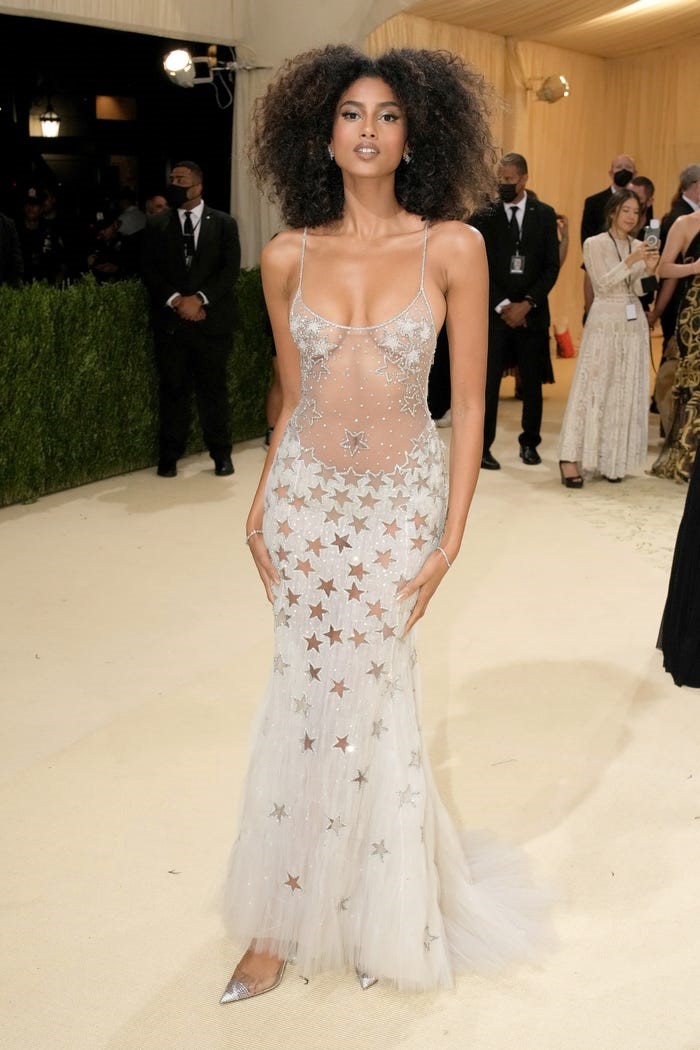 Julia Garner choose to go with silver sparkles with a column dress made of Swarovski crystals. Underneath the ensemble was an asymmetrical Stella Adidas bodysuit. 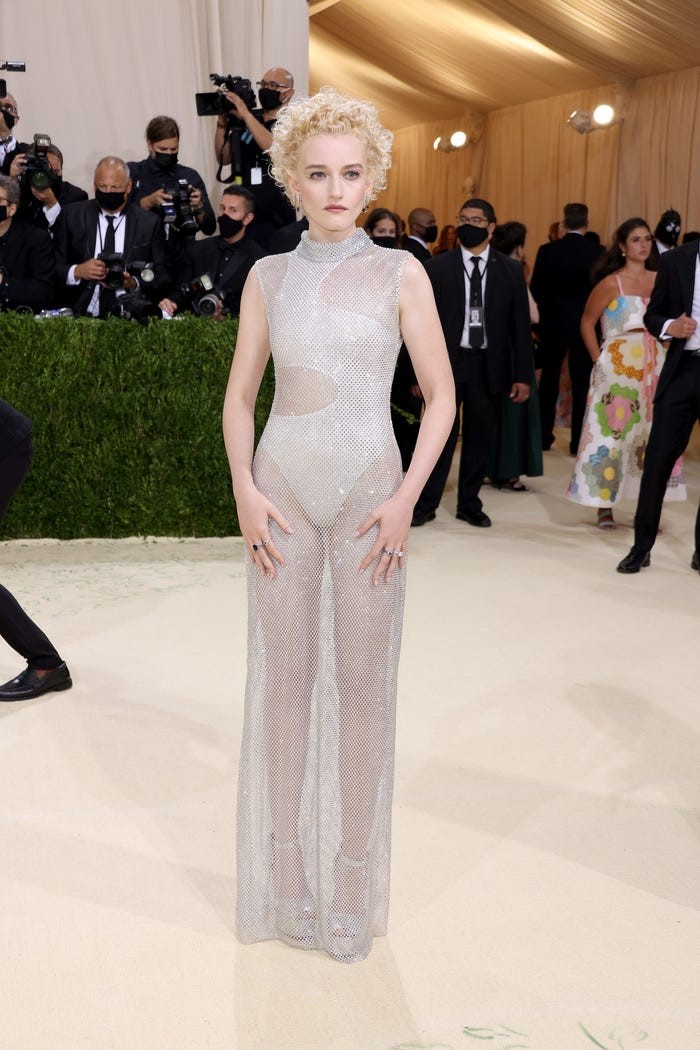 Taylor Hill’s bold dress had geometric cutouts with layers of sheer fabric giving her a princess vibe. The Victoria’s Secret model brought a splash of color to with this teal Versace gown. 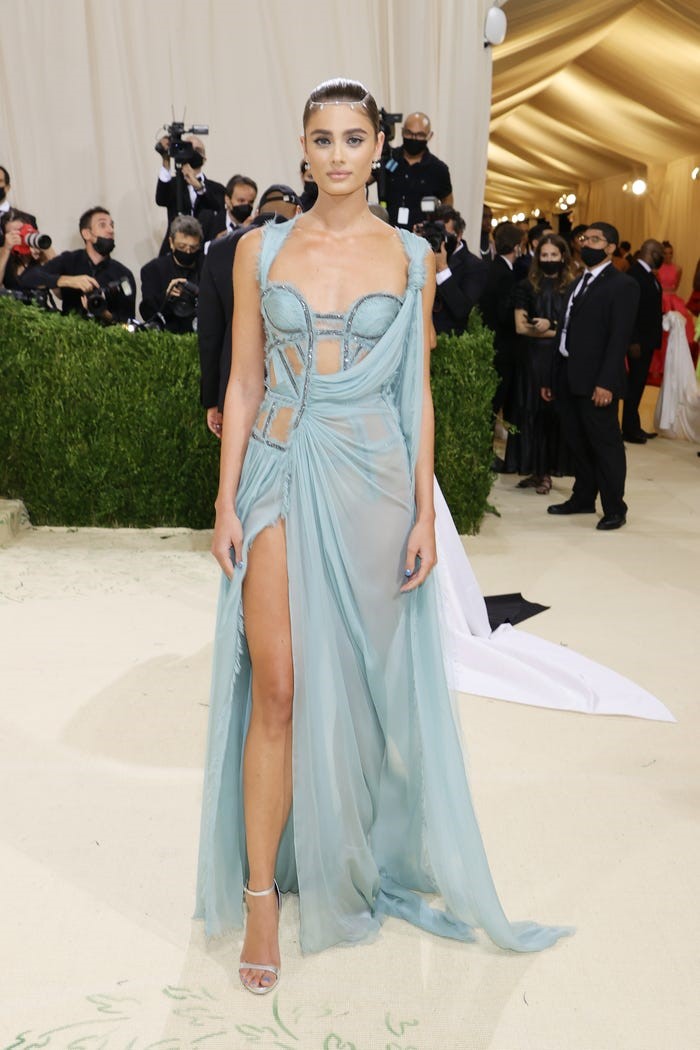 Irina Shayk’s tan gown was blossoming with multicolored flowers. The supermodel walked the red carpet with Jeremy Scott, who designed her sheer floral Moschino gown. Her dress featured a corset bodice that turned out to be a winning trend of the night. 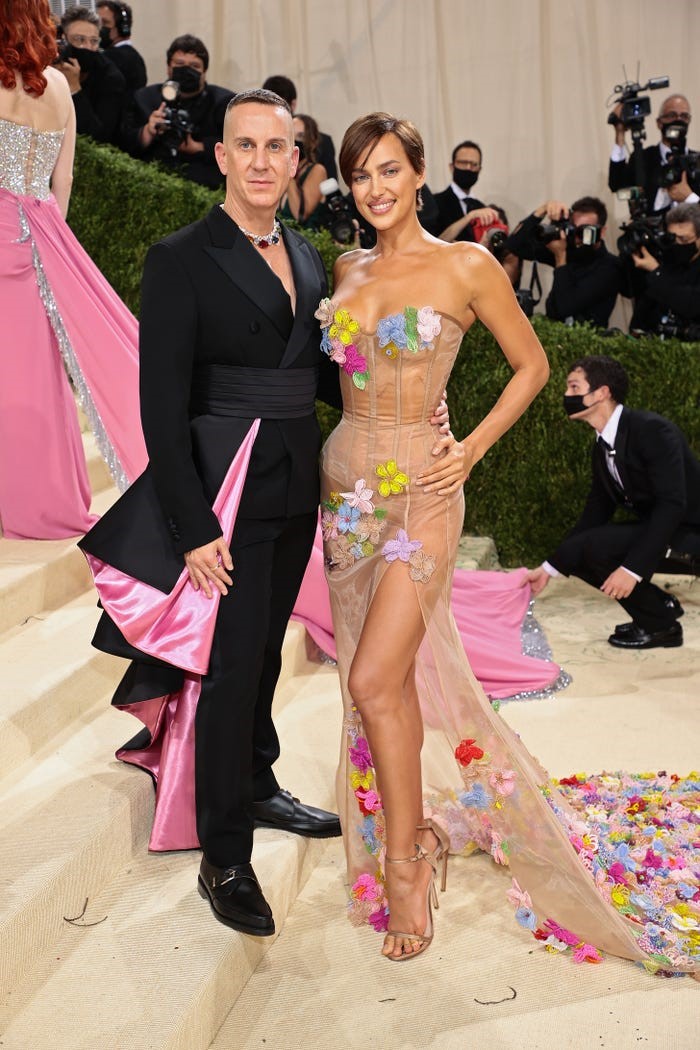 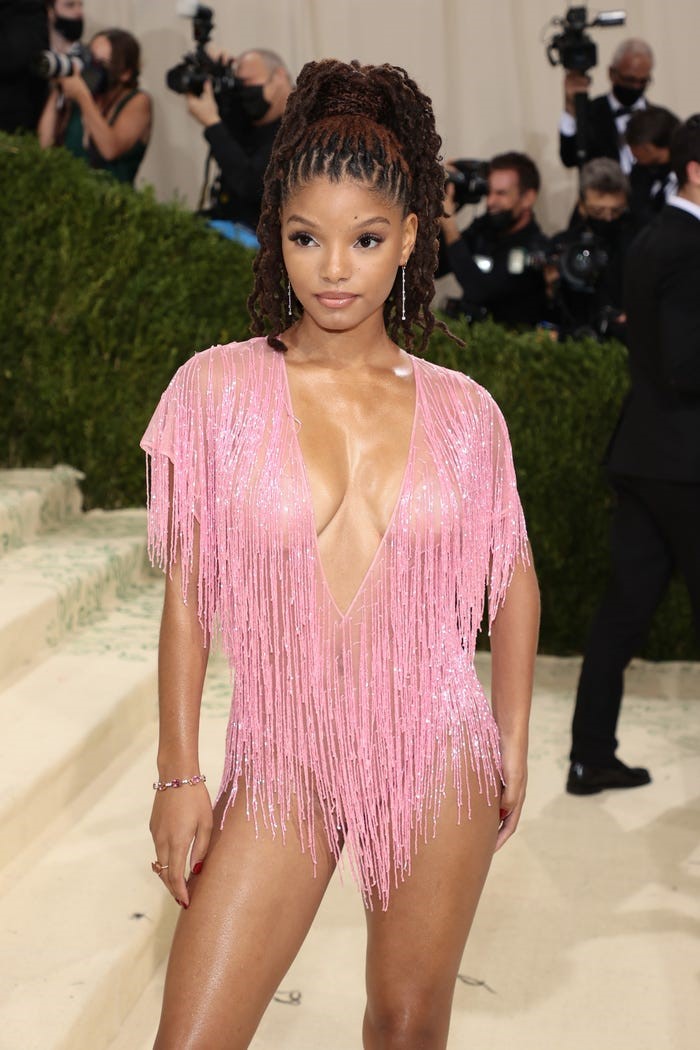 Emily Blunt was shimmering in jewels, her sparkling Miu Miu dressed featured a sheer skirt entirely made of crystals and a dramatic white cape. 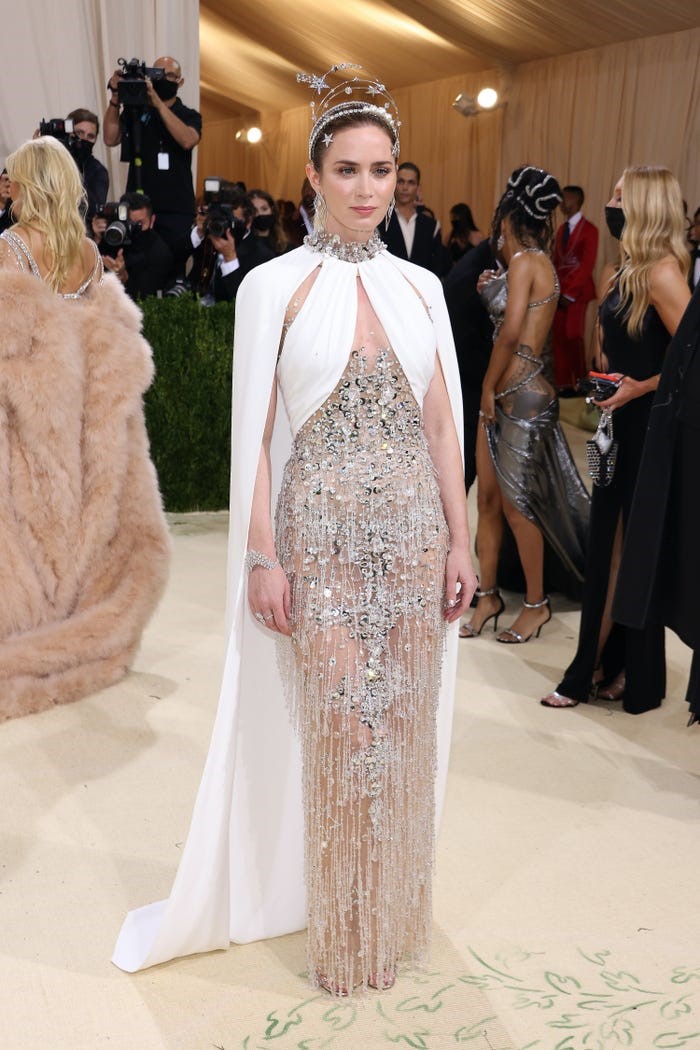 Winnie Harlow jumpsuit was made almost entirely of black fabric and was covered in an intricate white pattern. She paired the ensemble with a sheer, ruched cape, Harlow’s dramatic panels were a fashion high. 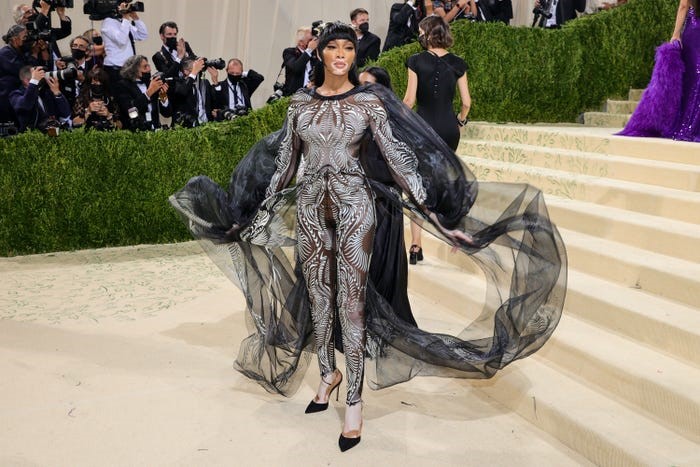 Grimes wore a sheer Iris Van Herpen number. Her white gown also featured a black skirt and train. She paired the ensemble with a sword and mask that looked straight out of the Middle Ages.

Kim Kardashian’s stark black Balenciaga haute couture gown with matching mask and train was unlike anything Kardashian-or anyone else-has worn to the Met before. 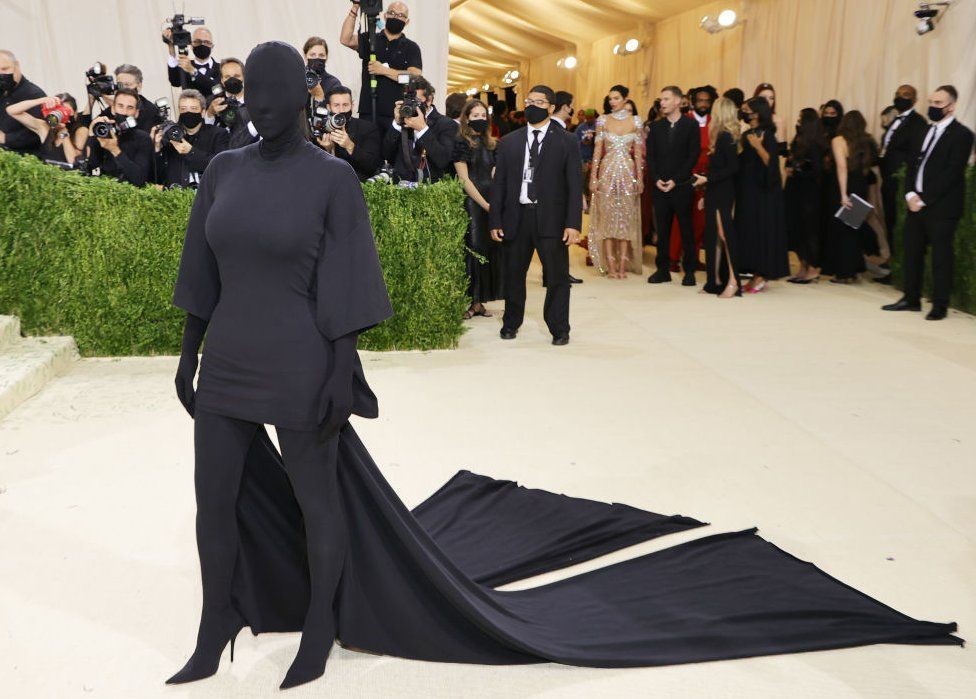 Serena Williams grabbed attention in a Gucci bodysuit beneath a floor-length feather cape. 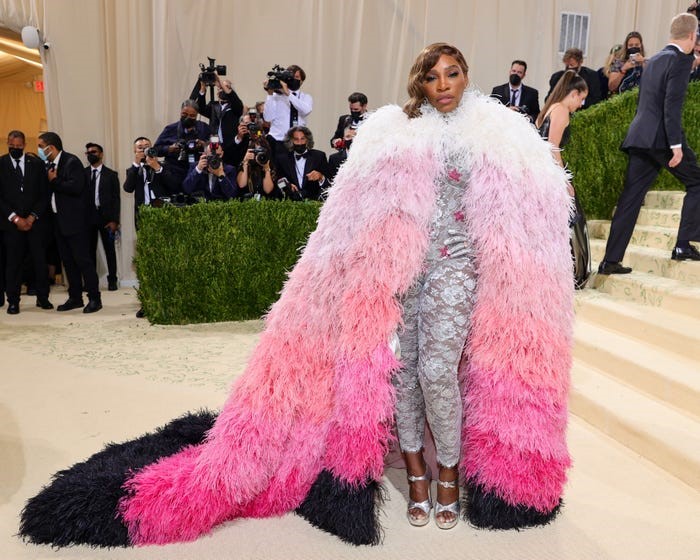 Game of Thrones actress Maisie Williams wore a Matrix-inspired dress she designed herself. 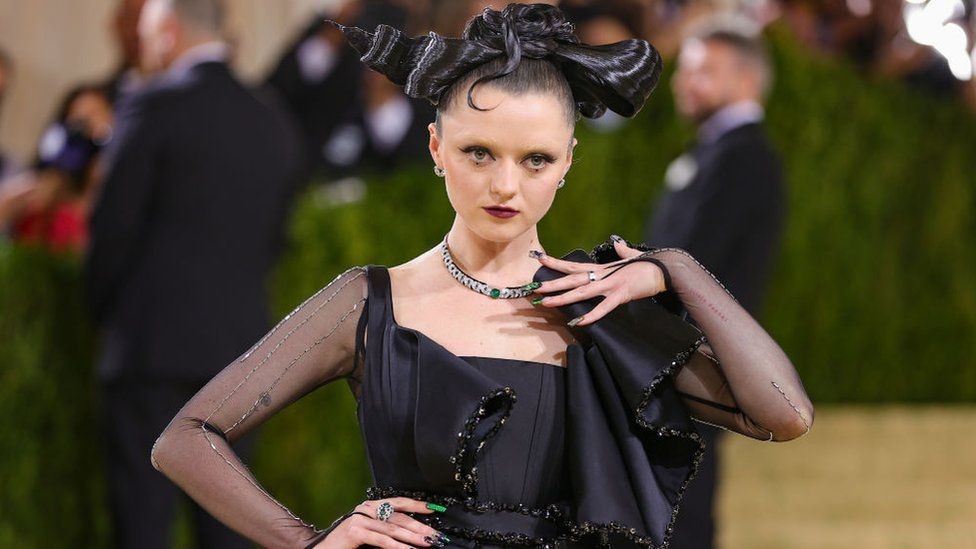 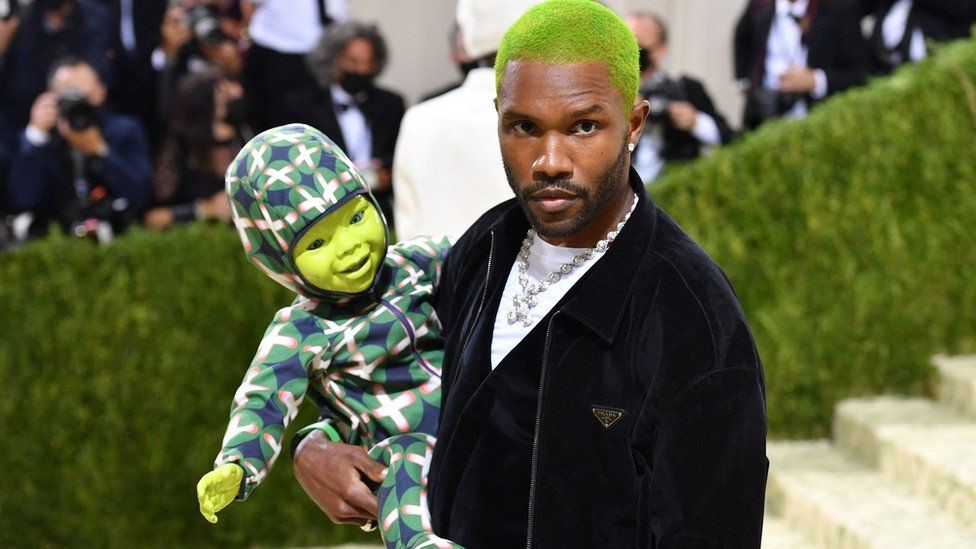 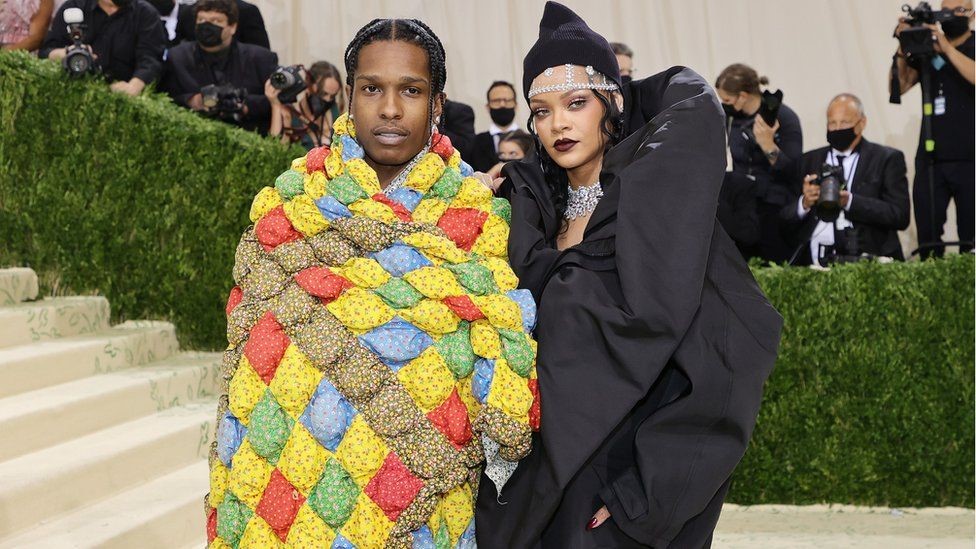 Rapper Lil Nas X first served up a regal robe that he whipped off to reveal a golden suit of Versace armour. The final look featured a sequined bodysuit 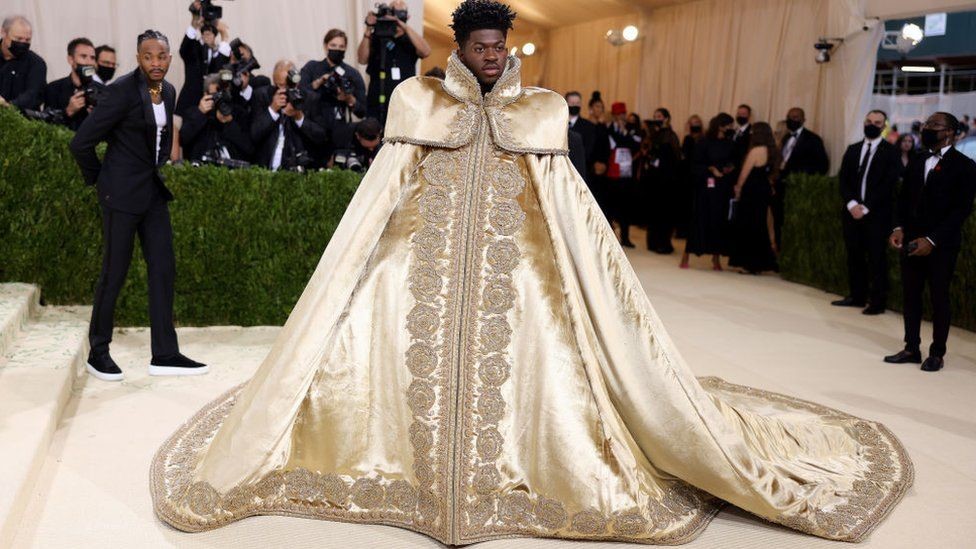 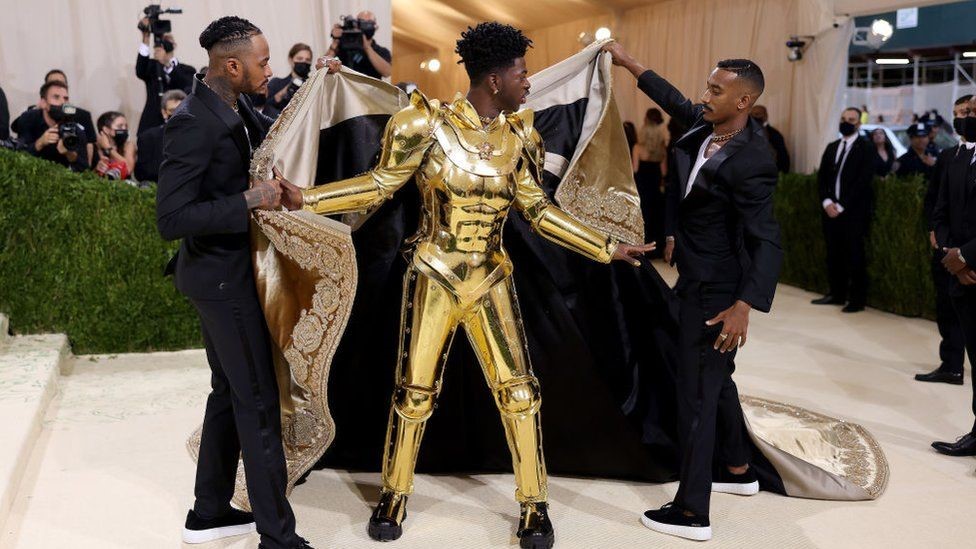 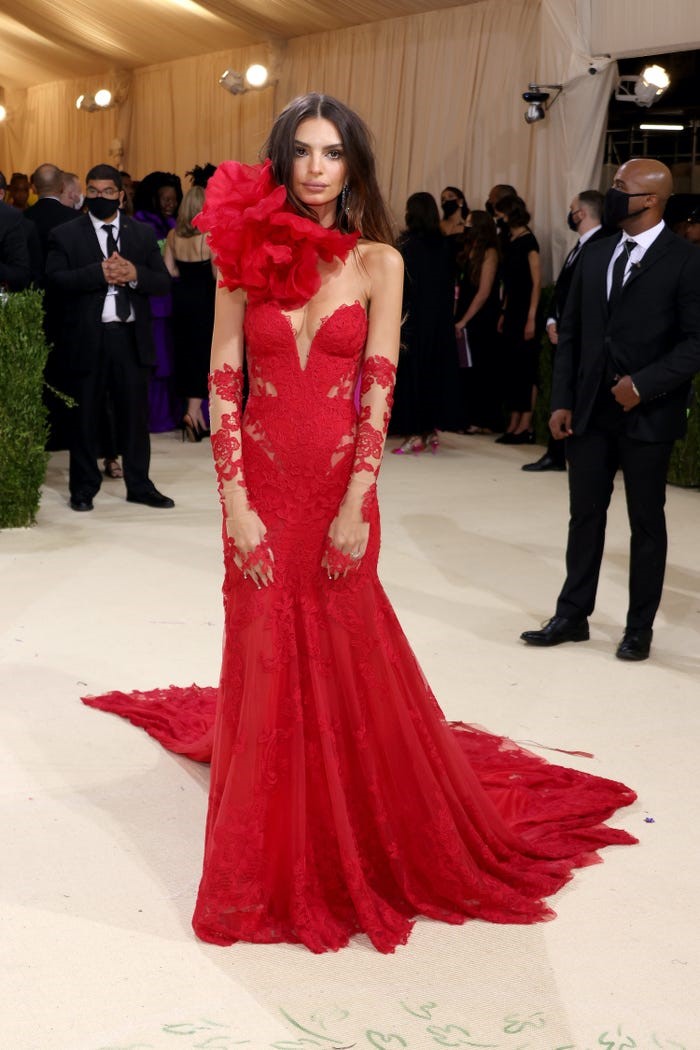 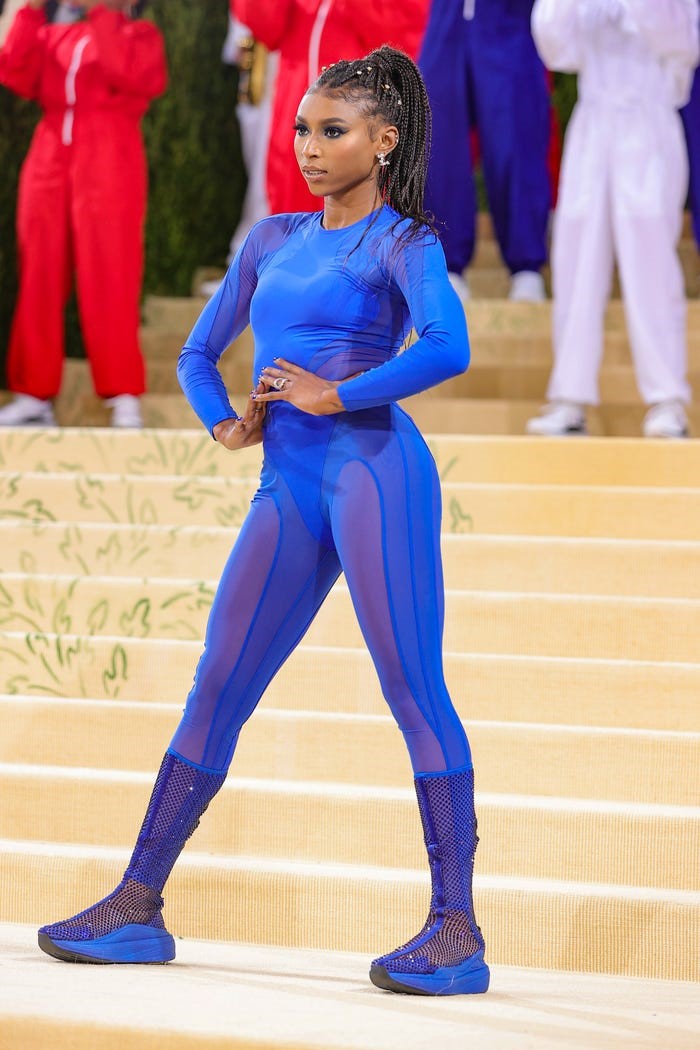 For the unversed, Met Gala 2021 is a fundraising benefit for the Metropolitan Museum of Art in New York City.