In a first, Saim Sadiq’s ‘Joyland’ gets a Standing Ovation, Rave Reviews, and Global Acclaim! 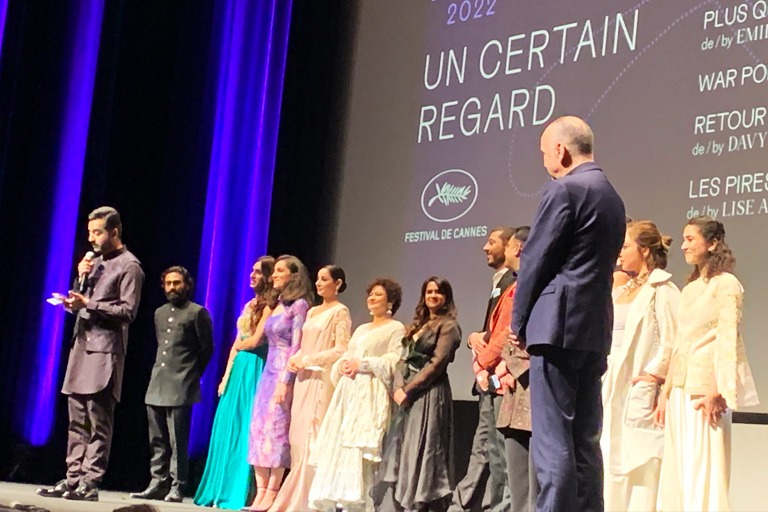 Saim Sadiq along with his ‘Joyland’ team are on cloud nine. The first Pakistani film to be screened at the prestigious Cannes Film Festival has turned out to be a humongous success. The cast and crew were ecstatic and rightfully so as the film got a 10-minute-long standing ovation after the premiere on Monday. Not just that, the film is getting rave reviews from international critics and the global audience is just loving it.

A video after the premiere is going viral on social media where the cast of Joyland got teary-eyed while receiving applause and appreciation.

“Joyland is a family saga, one that Sadiq uses to observe how gender norms constrict, and then asphyxiate, individuals. The Ranas feel trapped — by respectability, by family, by vague notions of honour. Bound by their duty to roles they quietly question, the members of this clan slowly suffer under the weight of obligation and expectations. What happens to them  -individually and collectively – is a process that Sadiq’s film chronicles with aching consideration.

As Joyland heads toward its end, the film grows increasingly moving. Secrets and their attendant lies collapse under pressure. The weight of what’s left unsaid strangles interactions. The Ranas can no longer afford to be delusional — their survival depends on it.”

#Joyland, the first Pakistani feature film at @Festival_Cannes, is a dazzling, defiant heartbreaker about desire. My chat with writer-director Saim Sadiq. https://t.co/3QQHAfhMYB #Cannes2022

“Joyland has a vivid sense of place, created not so much by its geographical backdrop as its characters. There’s an attention to detail in the rituals of daily life, whether it’s family celebrations or the rehearsals of the dance group. Mostly restrained emotionally, this packs an unexpected gut punch towards the end of the film, where it shifts focus to a deserving subject and drops another key character.

Presumably that’s meant to reflect the perspective of the protagonist, though it does leave some stories up in the air. But Joyland remains a thoughtful, well performed and engrossing drama set in a culture that’s shifting, and not always with ease.”

Another Indian critic Joshi heaped praises for the film and wrote, “Standing ovation for debuts can be so damn overwhelming … Joyland is a tender heartbreaker of a film. Reminding me of our own Masaan back in 2015.”

Standing ovation for debuts can be so damn overwhelming … #joyland is a tender heartbreaker of a film … Reminding me of our own #Masaan back in 2015 … pic.twitter.com/LT1ILJzspo

“Transgression becomes a means of liberation in Joyland, writer-director Sadiq’s assured first feature which explores the tensions within a Pakistani family enslaved by old-fashioned notions of gender and duty. Sadiq’s screenplay navigates a complex web of secrets and lies, pressures and prejudices to create a soulful human drama intent on challenging narrow minds. Said to be the first Pakistani film to play at Cannes, Joyland should make an emotional connection with audiences on the Croisette and far beyond.”

CNN’s popular writer, Page said, “JOYLAND – The first Pakistani film in the Cannes Official Selection is going to make waves. A film about loneliness, desire and self-denial, Sadiq’s handsome, graceful critique of patriarchy forgoes anger, opting for a gentler register, without sacrificing any of its power.”

JOYLAND — The first Pakistani film in the #Cannes Official Selection is going to make waves. A film about loneliness, desire and self-denial, Sadiq’s handsome, graceful critique of patriarchy forgoes anger, opting for a gentler register, without sacrificing any of its power.

Our very own Sarmad Sultan Khoosat

Sarmad Sultan Khoosat who is one of the producers of Joyland shared his thoughts and praised the young filmmaker, He wrote, “I could be biased (sure, accuse me) but with whatever authority I have, I hereby declare that there’s NO better filmmaker and storyteller than my puttar Saim Sadiq.”

He added, “I bawled and cried my heart out with joy and all the pride at the world premiere. Thankfully there are no photos of me right after the screening.”