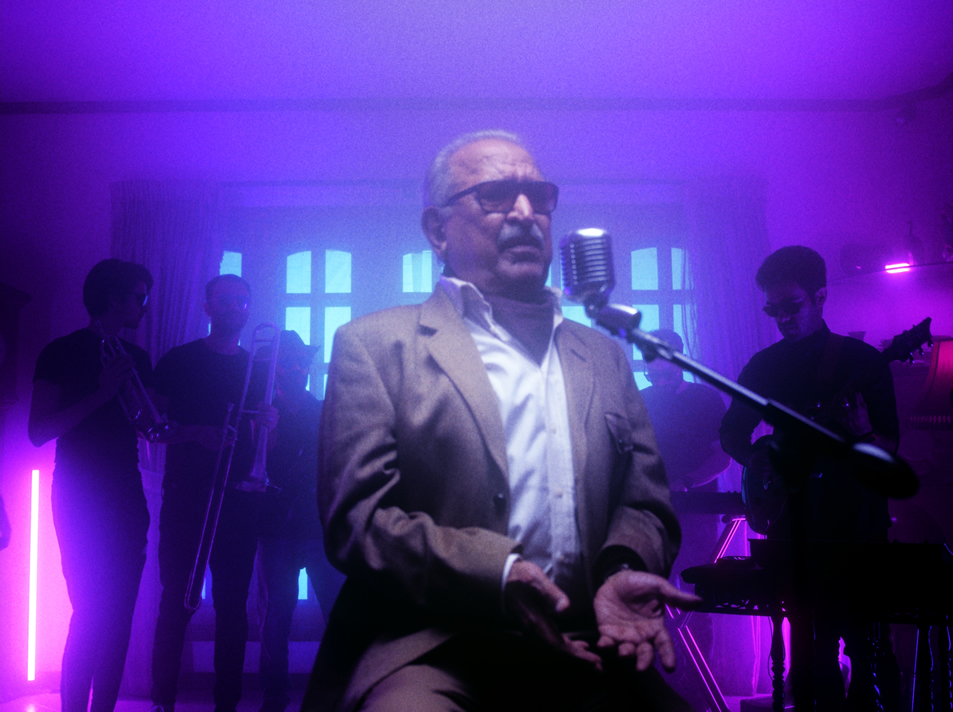 [Thursday, 31st March, 2022]: Singer Iftikhar Rashid, proving age is just a number, has officially launched his music career at age 70 with his debut song Rum Jhum, a tribute to K.L. Saigal. Music for the song has been produced by the talented Shamsher Rana who also happens to be Iftikhar’s grandson. Directed by Ali Ashraf, the video is stylized to capture the young energy of a contemporary vibe, wrapped in retro soul.

Talking about his musical inspiration, Iftikhar Rashid says: “The two singing voices which I always felt were the greatest voices in the subcontinent were K.L. Saigal and Pankhaj Malik. From my very school days I started listening to their songs and also some semi-classical music. Over the years, they became my tutors in the sense that I was fond of music and singing, but I did not keep any ‘ustaad’. I have never been tutored in music … my tutors are Saigal and Pankhaj. I used to listen to them on cassettes and in the car and sing along with them. With the passage of time my voice was cultured and I started singing their difficult songs with reasonable ease. Then a time came when my daughter insisted that I should practice on the harmonium also, as my vocal cords would improve. When I did that, I was amazed to see that I could reach the higher notes of Saigal and lower notes of both Saigal and Pankhaj, with reasonable ease.”

Explaining the backstory to Rum Jhum, Iftikhar Rashid says: “When I saw the 1943 film ‘Tansen’, there were four or five songs in that film which were really inspiring in the sense that they were difficult, melodious, and were also very appropriate to the nature of the film and the scene’s situation.

My debut song, which is inspired by the original “Rumjhum Rumjhum Chal Tihari” from the movie Tansen, is not a very happy song per say, but it has a lot of music and melody to it. In the movie, they show that the heroine is attacked by elephants and when Saigal starts singing this song, he has influence over the animals and they get charmed when they hear him and start doing exactly what he wants them to do. So he manages to stop elephants from attacking his beloved by singing this song, and eventually the animals all surround him and salute him.”

A time came in Iftikhar Rashid’s life when he began only liking classical music and subsequently in 2003 set up a teaching academy ‘Ahang-e-Khusravi’ in Islamabad, under the late Ustaad Fateh Ali Khan, known as a maestro of classical music. “So Fateh Ali Khan was a tutor in our academy for a good 16 years and passed thousands of years of pristine classical music to the younger generation. When I started liking classical music, Ustaad Fateh Ali Khan, in fact anybody who came across me who loved music or would play music, would insist that I adopt it as a professional career. This included Sohail Rana, Rashid Attre, and Inayat Hussain Bhatti also wanted me to sing for him when I was in college. However my father and family considered this to not be acceptable by way of our family customs and traditions. I was not allowed to sing”, he reminisces.

At the ripe age of 70 Iftikhar felt it was finally the right time to start singing. “Therefore I have recorded this song and am happy with how it has turned out. Music is a passion for me and because of it I can deliver better than if I was without that passion”, he says. Iftikhar feels it is too early in the day to definitively comment on where he thinks his music career will end up leading him. “If people like my music and my debut song Rum Jhum, I will continue releasing more music”, he concludes.