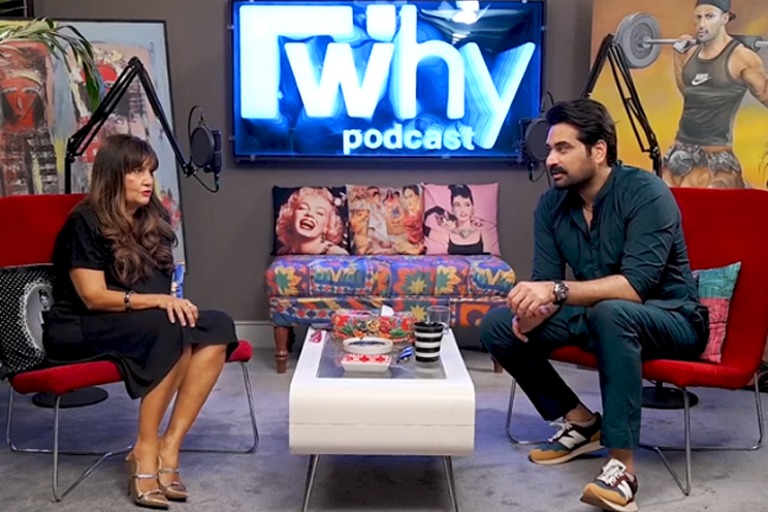 Humayun Saeed kick-started the first episode of FWhy, a new podcast series by Frieha Altaf. The London Nahi Jaunga star revealed many secrets about his personal life, his journey from childhood to the showbiz world. Here are some beans he spilled on the podcast.

Childhood & Relationship with His Father

Born in a Punjabi family, Humayun was the elder son. His father was very strict and Humayun used to please him by getting good grades in studies. He completed his matriculation from Nasra School; cricket and volleyball were his favorite sports. Saeed was happy to get more freedom when he joined St Pats College.

Humayun took responsibility for his family when he was just 18. Along with his studies he would give tuitions to support his father and his younger brother who was suffering from paralysis. In search of a good job, Humayun’s father took him to Altaf’s father who was an aeronautical engineer. When asked what kind of job he wanted to do, Humayun said, ‘I want to be a steward’. Well, that didn’t happen but he was sent to a garment factory where he got the job and worked relentlessly.

One day during a success party in the factory, Humayun made all the workers perform skits, dance and sing songs. Nadeem Baig was there and he told Saeed that he’s got the looks of a hero and should audition for a two-episode thing for PTV. Saeed didn’t pay much attention to it as he was busy with work but this thing stuck in his mind. Another colleague in the factory offered him an audition, which he did and got selected as the hero. And the rest, as well all know is history.

Meeting the Love of His Life

Saeed wasn’t serious about marriage until he met Samina. After getting to know each other, Humayun didn’t want to lose her and got married despite his parent not approving of it. Samina took some time to adjust as she was a bit conservative seeing his heroines.  But with time she realized that they are nice people and became good friends with Sania Saeed, Marina Khan, Mehreen Jabbar and Nadia Jamil. She used to hang out on sets and bring food for everyone.

Humayun feels the reason why he doesn’t have wrinkles on his face is due to the fact he eats everything. He does go on a diet but that’s for a shorter period. Also, when in the gym he prefers to do cardio rather than weight lifting.

The Grand Hollywood Debut with ‘The Crown’

Altaf did her best to fetch some details about Humayun playing ‘Dr. Hasnat Khan’ in Netflix popular series The Crown. But he remained tightlipped about it. All we can do is wait for 26 November when season 5 officially releases.