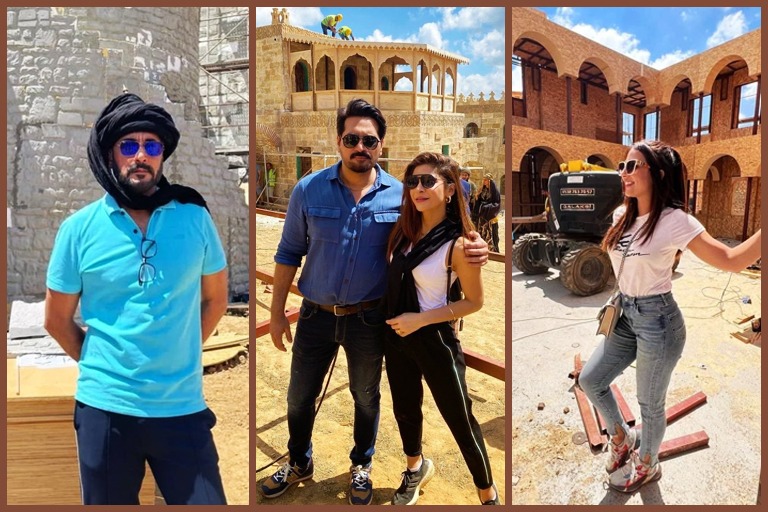 In 2021, Humayun Saeed and Adnan Siddiqui announced a joint production Pakistani-Turkish drama series based on the life of the 12th-century Muslim commander Salahuddin Al-Ayyubi. Recently they took the viewers on a virtual tour to the sets of the highly anticipated project. Snippets of Damascus city are making rounds on social media.

Actor Ayesha Omar penned an elaborate note on Instagram and expressed her excitement to be part of the grand project.

“Humbled, supremely grateful and floored to be a part of history in the making. Thank you, Allah, for this fantastic opportunity to tell the world our story, with the coolest team, the coolest crew and in the coolest city ever. One dreams of stuff like this. And I dared to do so. But it’s all HIM. On the sets of the first ever Pakistan/Turkey collab telling the story of one of the greatest Islamic warriors in the history of world, the great Selahaddin Eyyubi. This is just the beginning. Cannot wait to be in costume, on set and in character. InshAllah!”

What is the series all about?

The series revolve around the life of the famed 12th-century Muslim commander Salahuddin Al-Ayyubi, the first sultan of Egypt and Syria and founder of the Ayyubid dynasty, Salahuddin (1138-1193), who led the Muslim military campaign against the Crusader states in the Levant. After the battle of Hattin in 1187, he retook Jerusalem from the Crusaders who had conquered Palestine 88 years earlier.

Sneak Peek into the Grand Sets

Looking closely at the sets, Salahuddin’s historic palace in Damascus is built on 50 acres of the allotted 200 acres. We can spot shops, and quarters of Muslim and Christian communities of the time, and a mosque is also being constructed in its vicinity. The magnum opus production drama has a huge cast and crew, much of which was present at the set launch.

Written by Ahmet Faruk Bakacak, Selahaddin Eyyubi will go on floors in October. Around twenty-five percent of the cast includes Pakistani actors like Ayesha Omar and Ushna Shah amongst others. Besides, Adnan Siddiqui and Humayun Saeed serving as executive producers, the series is produced by Pakistan’s Ansari and Shah Films and Turkey’s Akli Films. As per Arab News, ‘The first out of 30 episodes are scheduled to be released in December’.

Without further ado, let’s have a look at the magnanimous sets