Humaima Malik On The Legend Of Maula Jatt: “I Was Bilal Lashari’s First Choice To Play Daaro Nattni” 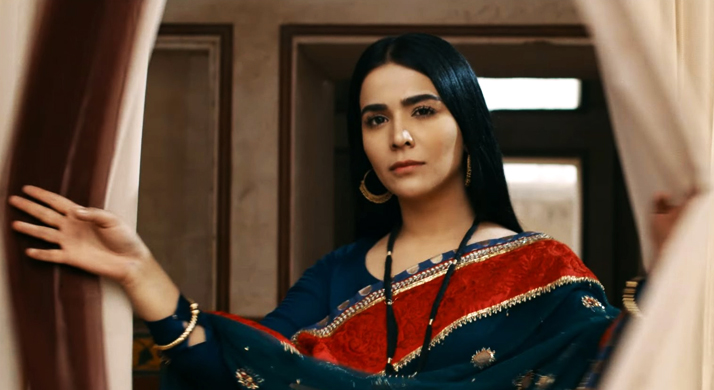 Humaima Malik is returning to the big screen with Bilal Lashari’s action drama ‘The Legend of Maula Jatt’. Her last two releases ‘Dekh Magar Pyar Se’ and ‘Arth’ didn’t perform well at the box office, so the expectations with this film are very high. In an exclusive interview, Malik spoke at length about being the first choice for Darro Nattni, her experience of working with team Maula Jatt and her upcoming TV drama Jindo.

On Being The First Choice To Play Darro Nattni

I was the first choice to play Darro, I knew the role would land up in my kitty. Bilal Lashari (director) had always imagined me the role. He wanted to give me a narration for quite some time but it never happened. One day I was at Ammara Hikmat’s place and Bilal came over and finally narrated the script of The Legend of Maula Jatt. At first, Ammara wasn’t the producer, but after some time, she came on board as a producer. Darro is a girl born into a family with men in the majority. She’s the only woman in the family. She’s a firecracker, who is well-versed in sword fighting and horse riding. To sum it up, Darro is arrogant, fearless, and fire. Her brother Noori Natt has one weakness and that is Darro. On the contrary, Darro’s biggest strength is Noori.

Stay tuned for #TheLegendOfMaulaJatt , releasing in a cinema near you on the 13th of October, world wide.

The Making of Darro Nattni

Bilal was very determined that I should not watch the original Maula Jatt as one gets the perception and tries to imitate the character. Whatever I did was very raw for me. I was very skinny, so to look the part, I had to gain weight. I learned the Punjabi language from Nasir Adeeb. Besides, there was a teacher on set with whom I practiced the lines. My wardrobe was done by Zara Shahjahan, a certain kind of fabric was required for my clothes. Ammara made sure that everything should be on point so she went to adroon Lahore to buy that. It would take around half an hour to drape my duppata. The jewelry was exquisite, the wonderful lachaay was just amazing to wear. So yeah I enjoyed myself.

I have recently completed a TV show titled ‘Jindo’ directed by Anjum Shehzad. It is a very well-written strong script. I feel proud that our writers are writing such wonderful stories and producers have faith in them and are pumping in huge capital.

Humaima recalled an incident and her sudden exit from a TV show that had big names attached to it. I shot for just 3 days and couldn’t do it anymore. I was saying no to the makers for six months not to cast her. Big wigs of the industry were associated with the project. The first day of the shoot had all the dining sequences. I just had to give some expressions and that was it. I didn’t feel comfortable. You cannot restrict me to a dining table. The script had all the saas-bahu masala that is being showcased these days on TV. I feel at this stage of my career, I have learned the art of saying NO.

The set of The Legend of Maula Jatt was the most positive set I have ever been on. Ammara was a sweetheart, she went all out to make this film what it is. She invested her belief, effort, and money in all of us. It was great working with Fawad Khan, he’s a generous actor. An actor who helps his co-actors to shine. We rarely find people like Fawad Khan in today’s day and age. I became friends with Hamza Ali Abbasi on set. I share some scenes with Gohar Rasheed and I must say that he is a ball of energy.

Concluding the conversation, Humaima said, “The Legend of Maula Jatt will be a game changer for cinema in Pakistan. It will take the audience into a fantasy world. I hope the film creates healthy competition and upcoming filmmakers would try to rise above it.”

The Legend of Maula Jatt is scheduled to be released theatrically on 13 October 2022.