How did Adnan Siddiqui’s War Against Drugs turned into a Meme Fest? 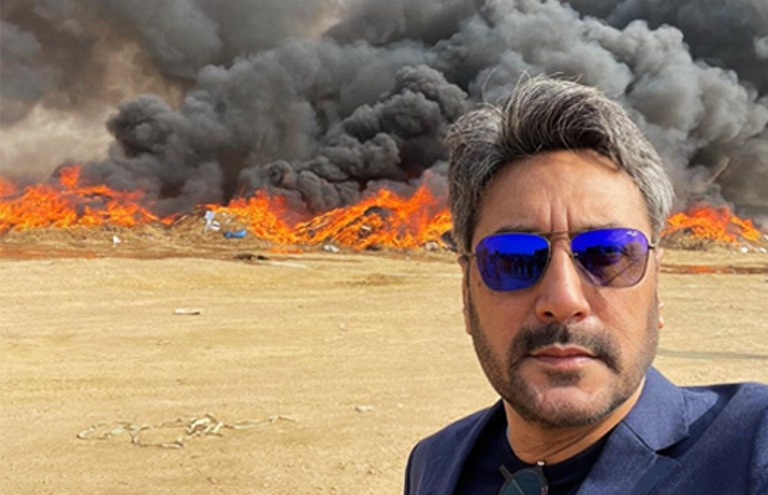 Do you appreciate meme culture? Do memes help inform you about what’s going on in the world? Do they help you process the news? Does your love for memes connect you with a larger internet community? On the other hand, have you ever seen memes that cross the line?

That spread misinformation? One such thing happened with actor Adnan Siddiqui’s recently initiated war against drugs, turning into a meme fest. The Instagram post with a fiery selfie got more than 19,919 likes and raised 100,000 followers.

Here’s What All Happened

The ‘Mere Pass Tum Ho’ star was invited as a guest where he lit fire to Narcotics at the destruction ceremony of confiscated goods. The event was organized by Customs (Enforcement) Karachi. It demolished smuggled liquor, cigarettes, betel nuts, contraband, and other goods. $2.5 million was the worth of the material burned. His selfie with the burning narcotics was misunderstood and started a meme fest on the internet. It went on to become the first viral meme of 2022 not just in Pakistan but in India, Dubai, U.K. and U.S. as well.

The producer further expressed, “Drugs is an evil that rusts our youth and our nation. A symbolic message that it’s to be turned to ash.”

In the words of the ‘actor’ himself

In an exclusive conversation with VICE, Adnan said, “I posed against a fire of illegal goods like gutka, crystal meth, heroin and hashish worth $2.5 million dollars to send a message to the youth of the world,” Siddiqui told VICE over a phone call. “I did not have a funny expression, had written something serious, and wanted to send a message. Instead, people around the world found it funny and began sharing it as a meme.”

The Uroosa actor further said, “My daughter found the photo very funny and asked me why I was taking a picture when there was so much pollution going up in the air,” he said. “Some of my friends who consume alcohol were upset that bottles of Grey Goose (a brand of vodka) and Blue Label (whisky) were being broken.”

Surprisingly, this meme comes at a time in Adnan’s career where he going through a low phase. Not to forget that his last project ‘Mere Pass Tum Ho’ was a mega success.  For a veteran, who has proved his mettle for decades take it as a ‘joke’ and is optimistic that it won’t be affecting his career.

Scroll down wo look at the memes

Remember this girl? This is her now. pic.twitter.com/T2xPTR4vDi

Made one based on true events pic.twitter.com/I8ZLRmcy5r

I think selling that Alcohol to Non-Muslim Pakistanis could have let us make some money and what about Air Pollution ? We wasted money and polluted air too, but what for? #AdnanSiddiqui pic.twitter.com/qiNO56BhFk