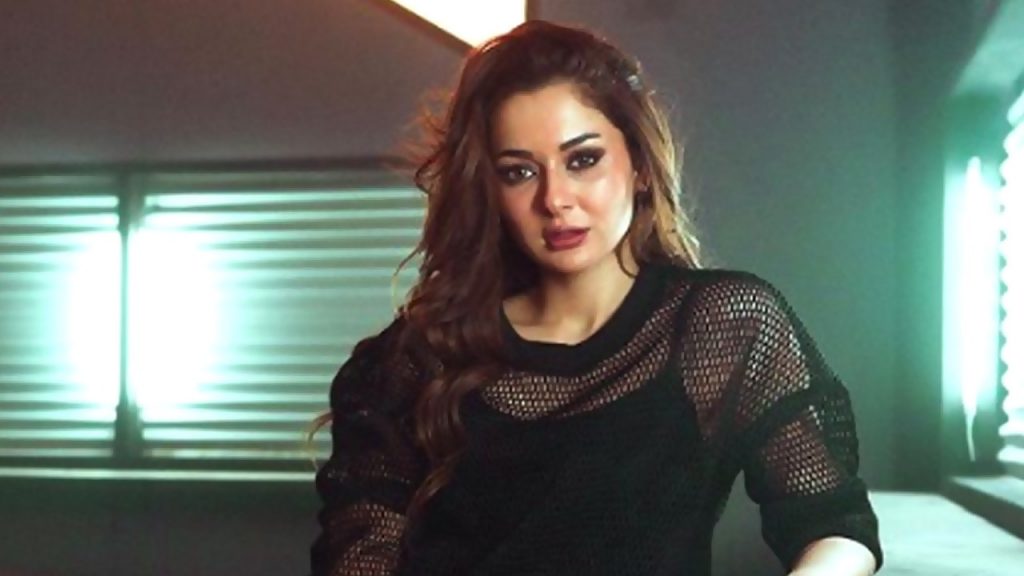 Hania Aamir is the recent celebrity to become a victim of online harassment and bullying. It all started during an Instagram session hosted by the Ishqiya star, when a section of the feed was edited to include a picture of a man ejaculating onto her picture. The video was then made viral for the entire world to watch and share.

Hania was struggling to come out of this cheap gimmick, when she was further dragged into another controversy. She posted a video featuring herself singing while lying on Aashir Wajahat (Director Wajahat Rauf’s son). The video spread like wildfire as people thought that Hania openly exhibited ‘vulgarity’.

Soon after massive trolling the video however disappeared and isn’t available on Instagram, but is widely shared on Twitter. 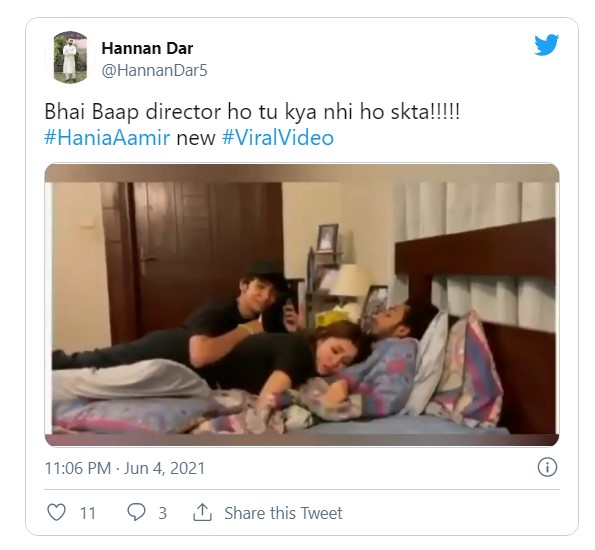 The three of them were enjoying and jamming to Aashir’s latest single ‘Kyun‘. However, fans were not happy at their close proximity and intimacy. This isn’t the first time that Hania has posted a video with Rauf’s family; she has been friends with them and is also set to feature in Wajahat’s next feature film ‘Parde Mein Rehne Do’.

A huge section of users accused Hania for seeking attention with her close relationship with Aashir: 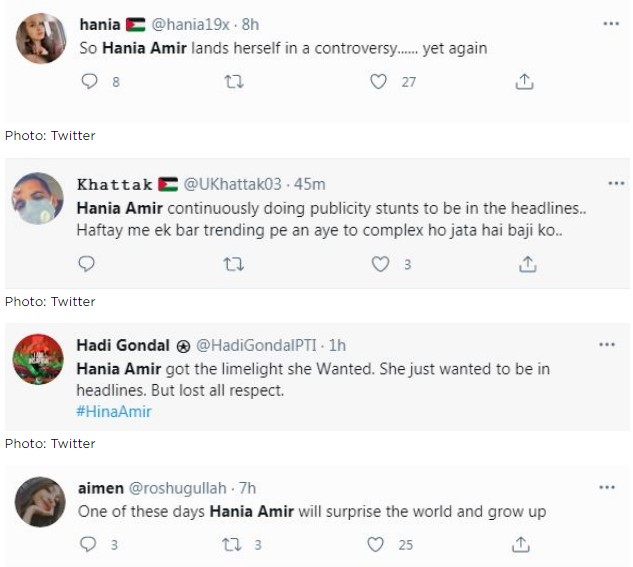 However, there were some who defended the actress and commented on the trolls who were trying to bring her down. 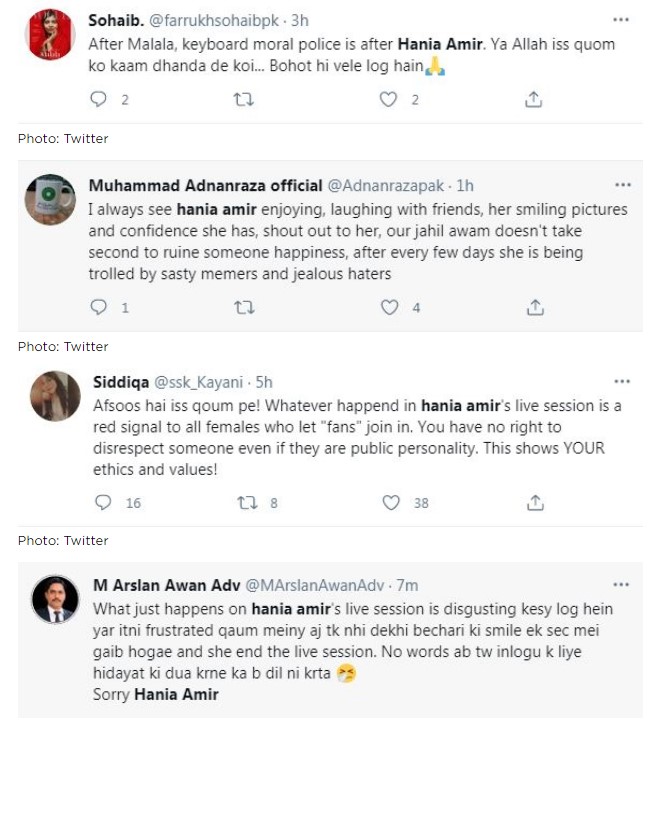 An upset Aamir receiving hate from all spheres posted a video of herself where a friend of hers was trying to cheer her up. She captioned the post as “misogynistic world with double standards.” 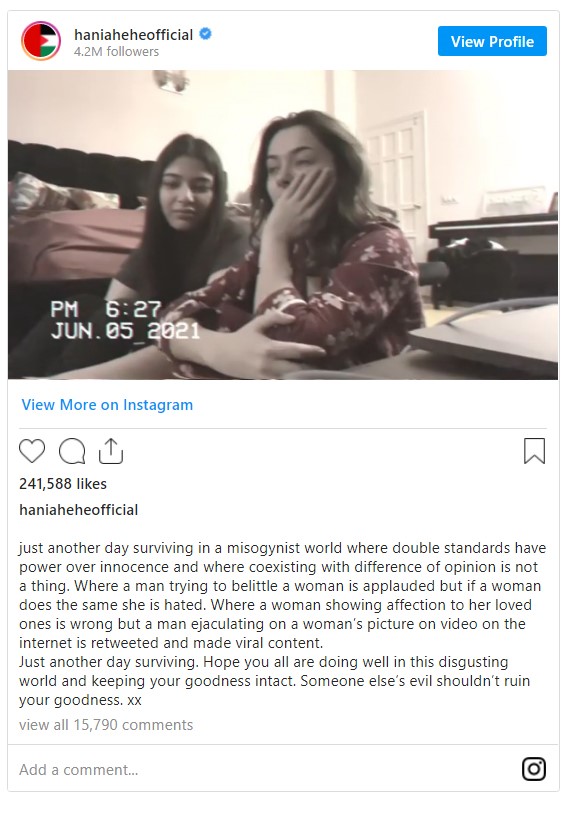 Adding more to the horror was the surprising cryptic tweet by Hania’s ex Asim Azhar. People were smart enough to figure out that it was an indirect jab at ex Aamir. 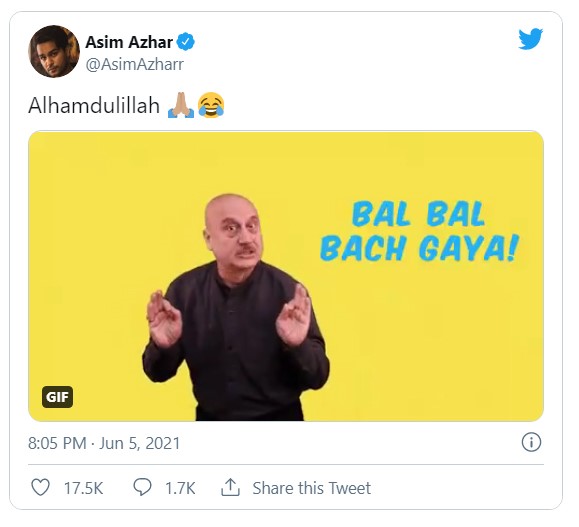 His tweet was a picture of Bollywood actor Anupam Kher with the words: “shukar baal baal bach gaya [thank God, managed a narrow escape]” on it with the caption “Alhamdulillah”, suggesting that he was glad the relationship was over.

She gave Asim Azhar a befitting reply. “You can either be a celebrity, or a bitter ex with no dignity.” 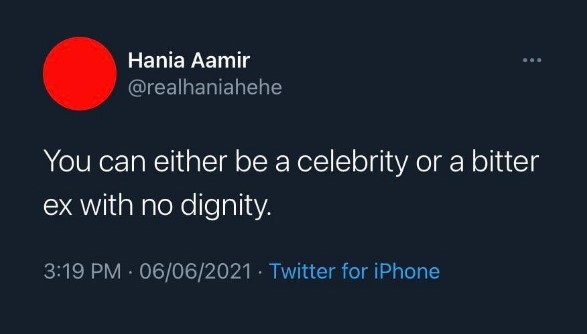 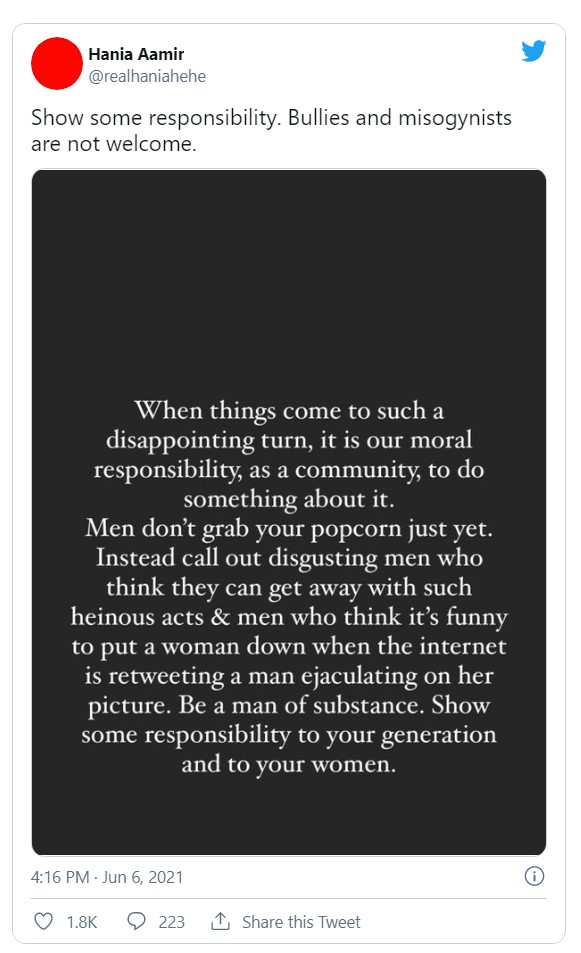 Asim Azhar clapped back after she seemingly took a dig at him with a cryptic tweet. Taking to Twitter, the singer shared a screenshot of a lengthy note where he detailed how he was bullied following their break up for over “one and a half year”. 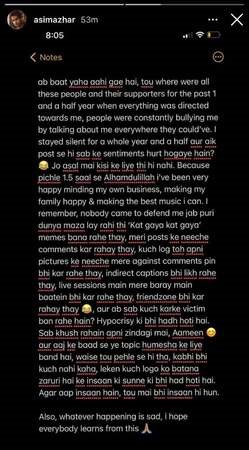 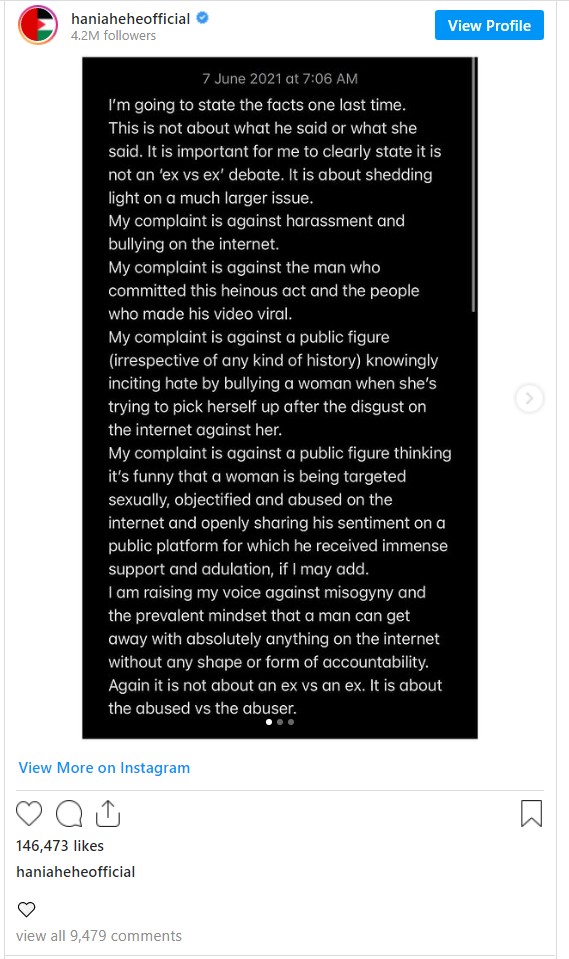 The industry too was also divided into parts. Checkout the industry reactions: 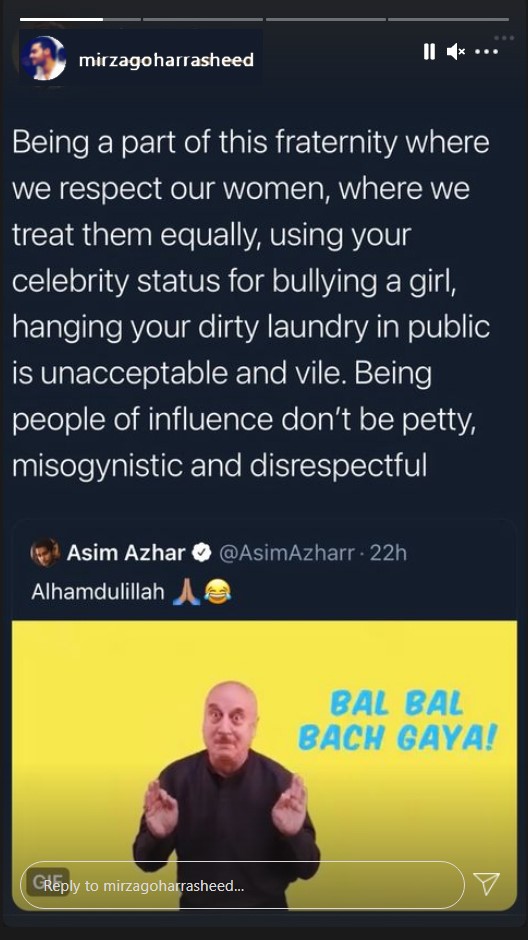 Yasir Hussain also expressed his views on the entire fiasco. 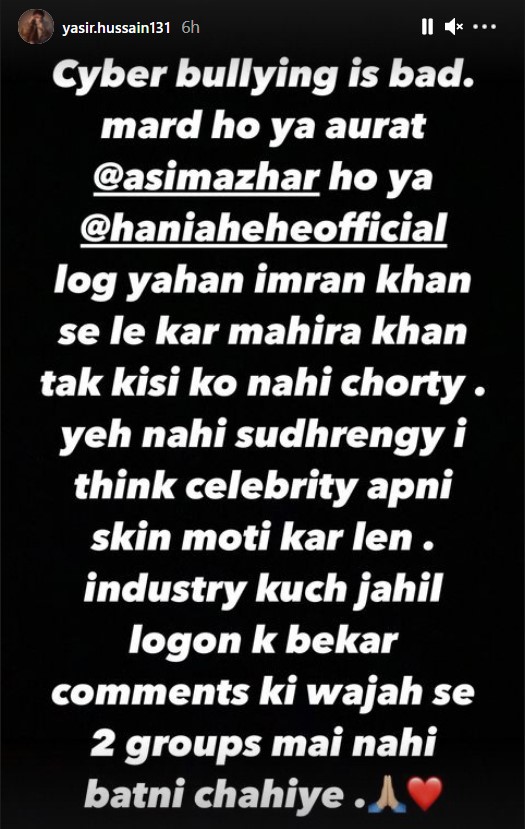 The King Fahad Mustafa took to twitter to express his opinion. 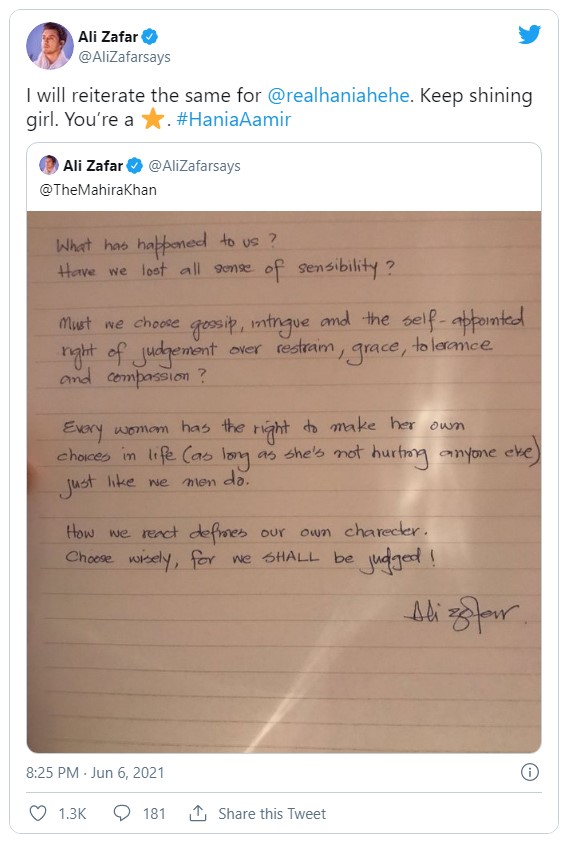 You Tuber Shahveer Jafry shared his two cents on respecting a woman. 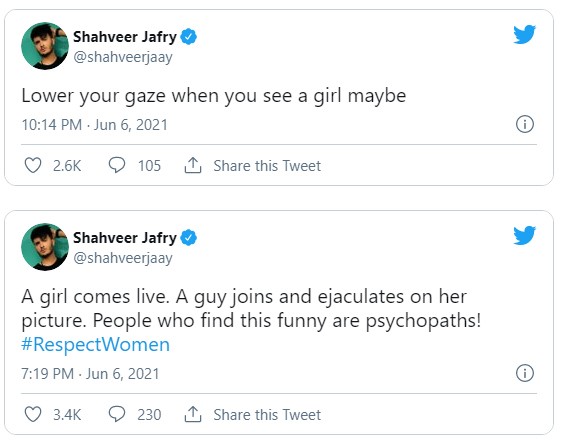