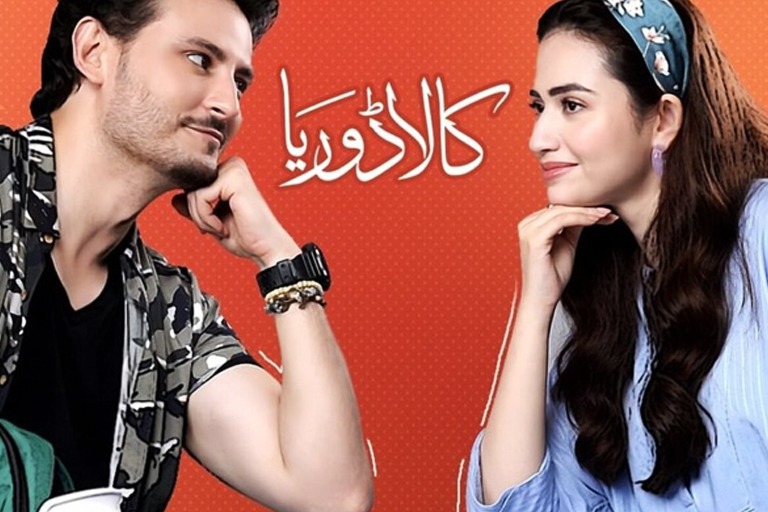 Osman Khalid Butt has already done enough to prove his talent in the last few years; he has managed to outdo himself with dramas like ‘Diyar-e-Dil’ ‘Ehd-e-Wafa’ and ‘Chupke Chupke’, so naturally his latest offering ‘Kala Doriya’ comes with a lot of expectations. Appearing to be a light-hearted family romcom the drama serial seems to be unique in story and presentation. It’s a multi-starrer that includes Sana Javed, Shehzad Noor, Farhan Ally Agha, Nadia Afghan, Zainab Qayyum, Tamkinat Mansoor, Khaled Anum, Ali Safina and Samina Ahmed amongst others. It is directed by Danish Nawaz and produced by Momina Duraid. So, did the play meet our expectations?  Let’s discuss.

What Did You Think Of The First Episode Of #KaalaDoriya? Let Us Know!

Viewers are right away introduced to the families of (Sohail Sameer And Farhan Ally Agha) in rivalry with each other for around five years. Subsequently, their hatred is transferred to their children Asfand (Osman Khalid Butt) and Mahnoor (Sana Javed) who leave no stone unturned to insult each other. The twist in the tale is that Asfand’s sister-in-law is Mahnoor’s sister who is actually the victim of the rivalry. Due to these family differences, the head of the family played by Samina Ahmed and Khalid Anum are living their lives separately.

What’s refreshingly different about this show is the way it expertly captures the dynamics of relationship in joint families. The protagonist aren’t heroic and the characters can be grey. They can make bad choices, act childish, or be mature. The situations are comical and relatable and the characters are believable. Yes, we do get vibes of Suno Chanda and Chupke Chupke but then it would be unfair to judge it at this moment as only the first episode has been on the air.

Danish Nawaz direction is supreme. Like always, he manages to rock the show with his execution. The story is a bit complicated but he handles it with panache, just like the way he helmed his past memorable shows like Chupke Chupke, Dobaraa, Hum Tum, etc. He’s known for his comedy and in this regard, he doesn’t disappoint. In terms of drama, he excels very well.  Speaking of performances, Osman Khalid Butt is in top form. He has his way of depicting humor and it works well. Sana Javed looks stunning and delivers a very able performance. Farhan Ally Agha leaves a mark and so does Sohail Sameer. Tamkinat Mansoor and Nadia Afghan are funny. Shehzad Noor is okay.

‘Kala Doriya’ superbly manages to capture the viewer’s attention. The strong premise backed up by strong directions and apt performances promises a great show ahead. But for the first episode, it’s a rocking start!