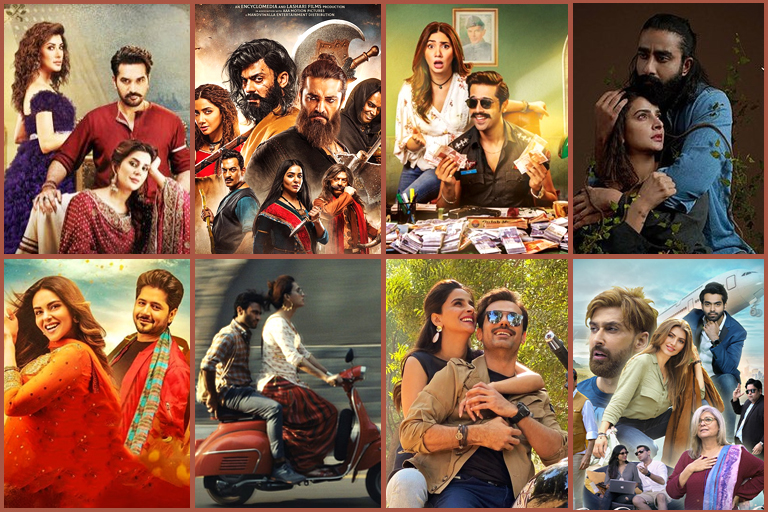 Sometimes it’s tough to recall some amazing films and performances of the year and put together a ‘Best of the Year list’. ‘Maula Jatt‘ fever is at its peak and it’s truly well deserved. If we sit back and think, the year witnessed some path-breaking performances and gripping narratives. From the intertwining stories of women and their restrained desires in ‘Kamli’ to a film like ‘Joyland’ that highlighted issues of sexuality and gender conformity, cinema in Pakistan became brave in its storytelling. As the year comes to an end, it’s time to choose the best films that entertained us through 2022.

Hassan Zia and Jamil Baig produced one of the best films of Mastermind Production JB Films, ‘Ghabrana Nahi Hai’, directed by Saqib Khan. The film starring Saba Qamar, Syed Jibran and Zahid Ahmed was arguably the most well-written film of 2022. Writers Hassan Zia and Mohsin Khan made sure that the story never had a single dull moment. They gave attention to detail is what made this film so nuanced, where every character and relationship was justified.

Ehteshamuddin’s ‘Dum Mastam‘ has to be mentioned for Amar Khan and Imran Ashraf’s convincing debut acts. Khan made a very confident debut and her performance was exemplary. She’s sure to stay and shine. The film managed to touch the right chord, not just with those who could relate to the story but also the regular movie-goers. The film got a thumbs-up from critics and audiences.

In June, came the most talked about film of the year, ‘Kamli‘. It narrated the story of a woman who deals with the consequences of her missing husband. She waits for him to return but the carnal desires urge her to move on. Saba Qamar, Sania Saeed, Hamza Khawaja and Nimra Bucha played their parts wonderfully. Saba especially stood out, a lot of ‘Best Actress’ trophies should be going her way as this was one of the best performances of the year by a female lead.

Nabeel Qureshi’s ‘Quaid-e-Azam Zindabad’ was a thrilling watch thanks to Fahad Mustafa’s brilliant performance. He played the role of a corrupt cop with a heart of gold who longs for Jia (Mahira Khan) a veterinarian, animal rights activist. This golden performance came from Fahad at a time when he wasn’t doing much work for the celluloid. He conquered and proved once again that he is here for the long run.

Given Humayun Saeed and Mehwish Hayat’s unmatched popularity in the country, the hype around the film was justified. While Nadeem Baig showed his deft direction, it was Humayun Saeed’s commendable performance that stole the show.

Another gem was Saim Sadiq’s ‘Joyland‘ which narrated the story of Haider who was victimized because of his sexual orientation. A difficult subject to tackle, Sadiq’s debut impresses with its sensitive storytelling and vibrant visuals. He brought the struggles of the trans woman to the fore with sensitivity. Aleena Khan’s restrained performance in the lead role was captivating. It was a brilliant story that was waiting to be told.

The Legend of Maula Jatt

Finally, the year came to a close with Fawad Khan’s much-awaited film ‘The Legend of Maula Jatt’. Bilal Lashari’s reboot of the 1979 cult classic was an unprecedented slam dunk of global domination. This film has taken the box office by storm and is still running successfully. This movie got a unanimous thumbs-up from critics and audiences. ‘The Legend of Maula Jatt’ is not just a strong contender for the best film of the year, but one of the best movies made in Pakistani cinema.

Yaara Vey was one of the most lovable films to come out in 2022. It was the perfect rom-com directed by Manish Pawar and written by Mahwish Ajaz and Althea Kaushal. The film follows the story of a young free-spirited girl Sania who finds herself in a love triangle with the gentle Arman and maverick Samir.  The movie was an enjoyable experience and did solid business at the local and international box office.