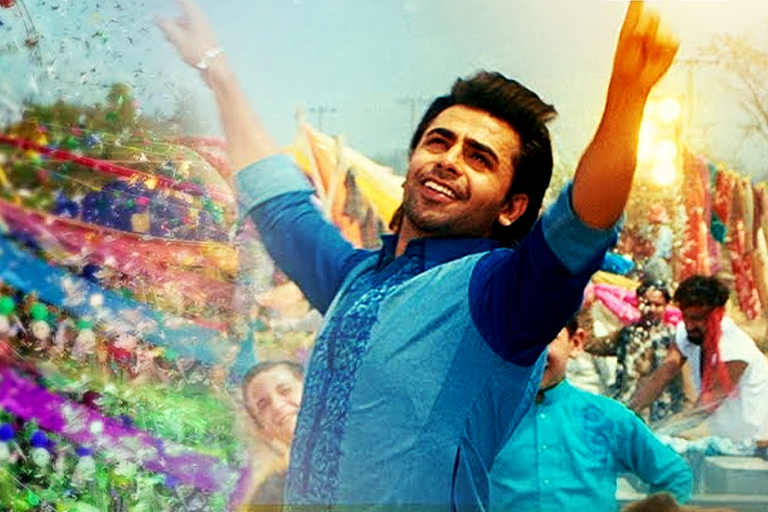 Romcoms are an addiction for a wide majority of the audience in Pakistan. Tich Button tries to capture the spirit of the genre that is up-to-the-minute in its attitude, yet very traditional at heart. The packaging may be contemporary, but the content is pure, unadulterated desi emotions.

Noor Haveli (Lahore) is the setting for Tich Button. We are introduced to a big Punjabi family wherein Kaka Sahab (Farhan Saeed) and Saqib Khan (Feroz Khan) are the young lads. The latter works as a chef in Turkey and wants to call off his childhood engagement with Shakeela (Sonya Hussyn).  When Saqib along with Kaka’s support attempt to do so, Leena (Iman Ali) Saqib’s friend from Turkey enters the frame. What happens next forms the rest of the film.

The premise of Tich Button relies heavily on romance and light moments. Though the storyline is wafer-thin, the twists and turns in the film keep the interest alive. The film has amazing moments aplenty. The interaction between Leena and Saqib, the intermission pinnacle takes the graph of the film upwards. Even Leena’s introduction scene makes for interesting viewing. Veteran Sohail Ahmed’s crucial performance in the climax is among the high points of the film.

Writer Faiza Iftekhar has packaged several humorous sequences in the first half. A majority of light moments are sure to be appreciated, although the tongue-in-cheek humor is the kind that would appeal to both multiplex and hardcore masses. Director Qasim Ali Mureed succeeds on two fronts; he has shot the film exceedingly well and has also extracted fantastic performances from not just Farhan, Sonya, Feroz and Iman, but also every character in the film. Besides, the locales of Turkey and Pakistan provide a rich visual feast for the cinemagoer.

Adrian David Emanuel and Naveed Naushad’s music is amongst the high points of the enterprise. The rule of the game is that a romcom ought to be embellished with a melodious score and the narrative in Tich Button does get a definite push thanks to a lovely score. With tracks like ‘Mein Ni Boldi’, ‘Ehsan Hai Tumhara’ and Kachi Mitti sound easy to the ears, the best part is that they’re well placed in the story. However, Pretty Face was forced into the narrative. There wasn’t any need for an item song. The cinematography is strikingly beautiful. The background score (Mohsin Allahditta) is terrific to the core.

Casting is one of the film’s strengths. It would be hard to imagine anyone other than Farhan Saeed as the wisecracking Kaka. Farhan’s style is perfect for this role; he makes Kaka insufferable and likable at the same time. And, beneath it all, there beats the heart of a caring man. His arresting performance is sure to sky-rocket his fan-following amongst the youngsters.

Likewise, Sonya’s effervescent personality infuses Shakeela with buoyancy, and, later in the film, she too shows a vulnerable side. Sonya takes a giant leap as an actor, making you realize that she is amongst the finest actresses of her generation. Not only Sonya looked gorgeous but delivered a first-rate performance. Feroz Khan gives yet another reason for audiences to be in awe of him. The ease with which he has handled both, comics and emotions, is clap worthy.

The boss lady Iman Ali (yet again) pulls off her role in the film very flawlessly. After having proved her versatility as an actress in her earlier films like Khuda Ke Liye, Bol and Mah-e-Mir, Iman springs up with yet another heart-winning performance in Tich Button. The attitude and body language with which she approaches her character is spot-on.

The supporting cast of Tich Button is a treat to watch. Sohail Ahmed is marvelous. His comic and emotional sequences will surely bring the house down. Another lovable performance! Samiya Mumtaz is a delight. The actor gives her role that rare sheen that only veterans are capable of. Humaira Ali is first-rate. Marina Khan is dependable as always. Ali Sikander is excellent. Noor-ul-Hassan is fantastic. Gul-e-Rana is remarkable.

On the whole, Tich Button is a beautifully textured love story and an enjoyable entertainer that wins you over and keeps you hooked right to the end. Do not miss it.