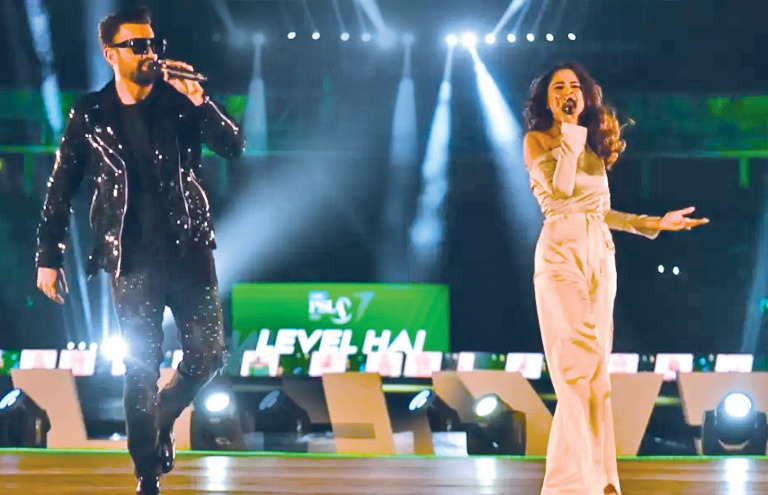 Amid the prevailing Covid-19 situation in the country, Pakistan Super League PSL 2022 returns to Paksitani soil. Fans besides cricket (for obvious reasons) are super excited to watch the opening ceremony. Over the years PSL opening ceremony has always been an integral part of the cricket extravaganza the glam and glitz of the ceremony acts as food to soul.


The opening act of the 7th edition kicked off on Thursday. Signing sensations Atif Aslam and Aima Baig took the center stages and rocked the nation while performing on PSL anthem ‘Agay Dekh‘.

Aima baig’s part was better without any doubt

PSL 7 kicks off with an Outstanding Opening Ceremony ❤️🔥😍😍#PSL7 pic.twitter.com/GvVN2HOmYi

“I am opening the seventh PSL, and I hope every team fights till the last ball and entertains the public,” Prime Minister Imran Khan said in a video message.

A three-minute paragliding act was also done by three Austrian skydivers — Florian Greger, Paul Steiner, and Stefan Muller — who took flight in the military Mi-17 and dived back into the Faisal Base training ground from about 5,000 feet in the air.

The ceremony was followed by a match between defending champions Multan Sultans and Karachi Kings. Pakistan skipper Babar Azam lead the Kings while wicketkeeper-batsman Mohammad Rizwan was the captain for Sultans.