Class of 2022: Fashion Times Picks The Top 5 Drama Actresses Of The Year 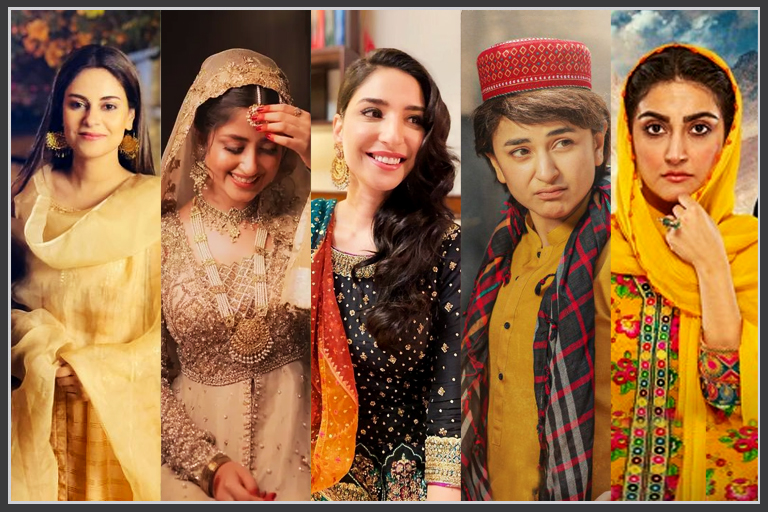 Here’s a look at the best 5 drama actresses who donned different characters in 2022 and pushed their artistic limits.

Make no mistake. Even though Syed Jibran and Momal Sheikh play the baddies with aplomb it was actually Amar who proved to be the ‘star’ of Darrar with much more gravitas, more substance and more depth. Honest, gentle and dignified all at once, Darrar is as much about Irha as it is about Shaheer and Sajal, no mean feat for an actor when sharing the screen within a triangle of actors. It was just that our hearts wept the most for Irha, whereas Amar knocked it straight off the charts with her class act. She shows true grit onscreen, something it’s taken her seniors decades to master. Her superb embodiment of her character was hands down one of the most endearing performances of 2022.

Shedding your glam look and featuring as the protagonist in a masculine avatar is a gutsy move for which Zaidi deserves brownie points and more. As Bakhtu aka Bakhtwar, a small-town young girl, ridiculed by even her own family, Zaidi sparkles in this intriguing ongoing drama serial never once becoming a groveling mess while remaining firmly unapologetic about her basic rights. She’s a strong, ambitious, independent woman who refuses to take any BS, and takes on the challenges to achieve her goals. In short, the best kind.

Need we say more? Not exactly! Sajal Aly seems to have the Midas touch and everything she touches turns into pure gold. This was the year of Sajal, with two massive plays; Ishq-e-Laa and Sinf-e-Aahan.  Whether it’s the doting daughter fixated to join the army in Sinf-e-Aahan, or the daring journalist Shanaya who puts humanity above all in Ishq-e-Laa, Aly’s amazingly nuanced, subtle and on-point performances are an absolute treat for the viewers.

Bukhari didn’t get as much credit as her co-stars did in Mere Humnahseen but the drama was as much about her as it was about her possessive fiancé. She made Khajista’s ambitions look real. Right from her flawless Pashtu diction, to her correctly done body language, she is absolutely marvelous. Strong and powerful, Khajista is a role model for today’s women. The conviction with which she aced her act is commendable. Can we have more of Hiba, please?

The actress has always had a reputation and great commend on her emotional sequences, but she impressed us all with her comic timing in Hum Tum. The impact of Neha is so significant that you just cannot imagine any other actress in her role. She gets into the skin of her character the very way like a fish takes to water. Ramsha is quickly becoming an expert at making the viewer’s believe her as the used and wounded phoenix destined to rise from the ashes. Days of the future are definitely promising for this beauty with brains.

Did we miss any? Do let us know in the comments below!