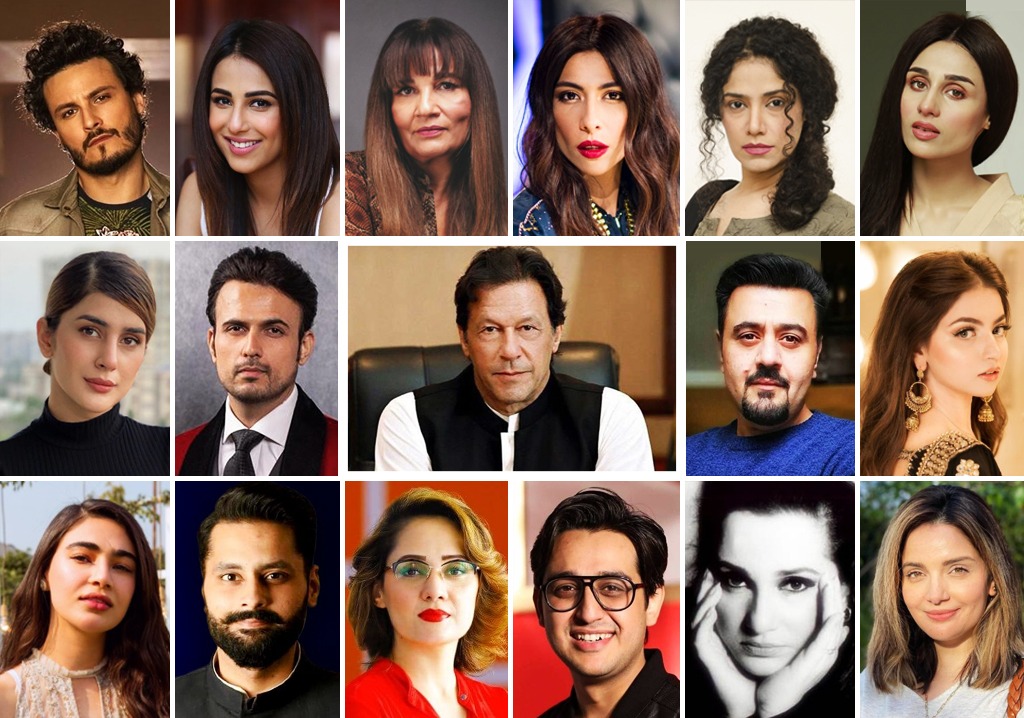 Recently, in an interview with “Axios on HBO” with journalist Jonathan Swan, Prime Minister Imran Khan said that “if a woman is wearing very few clothes, it will have an impact on the men, unless they are robots” has sparked a global outrage. The Human rights group in Pakistan are accusing PM Imran Khan of being a “rape apologist”

What did the Prime Minister say?

In a two-hour-long, question-and-answer interview with the public on live television, Khan was asked what steps his government had taken to prevent sexual abuse. After denouncing crimes against women and children, he said that sexual violence was a result of “increasing obscenity”.

Anchorperson: You were accused of rape victim blaming, how do you respond to that?

PM Imran Khan: It is #SuchNonsense

Celebrities didn’t like what he had to say. They took on PM Imran Khan’s statement on rape and obscenity at social media.

‘Is it [a woman wearing very few clothes] really going to provoke acts of sexual violence?’
‘It depends which society you live in!’

If that isn’t a damning indictment of our society I don’t know what is.

When the outrage – and the outrage over the outrage – dies, I hope we can focus our energies on the culture of shame, misogyny and societal victim-blaming that leads to (as Khan saab pointed out) families of victims not reporting abuses because they are ‘so embarrassed.’ 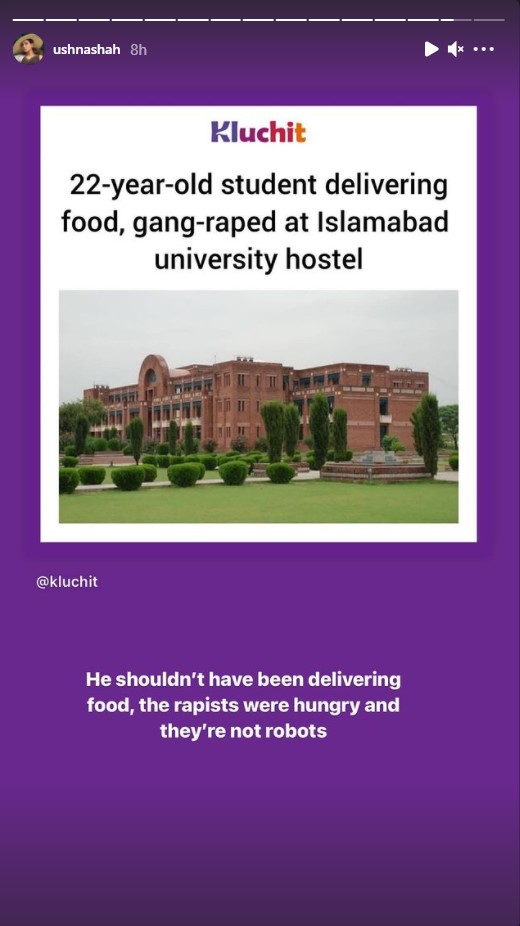 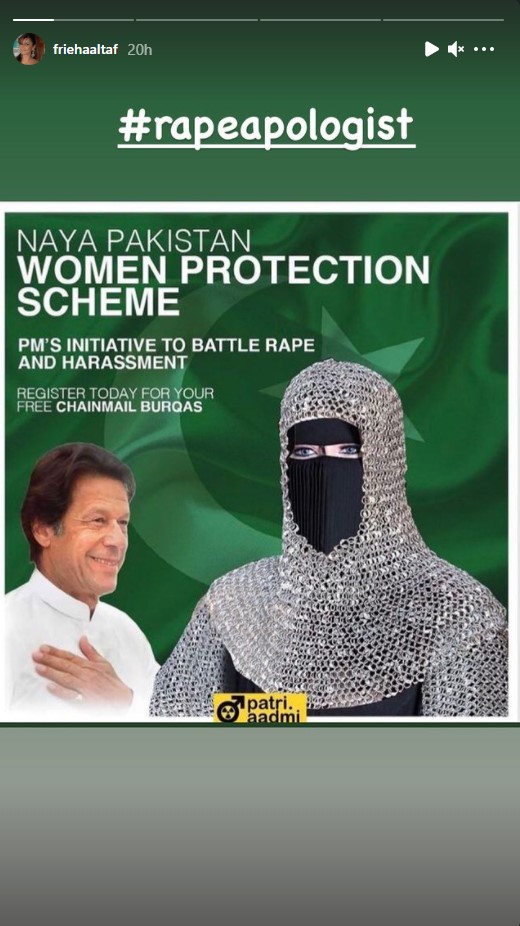 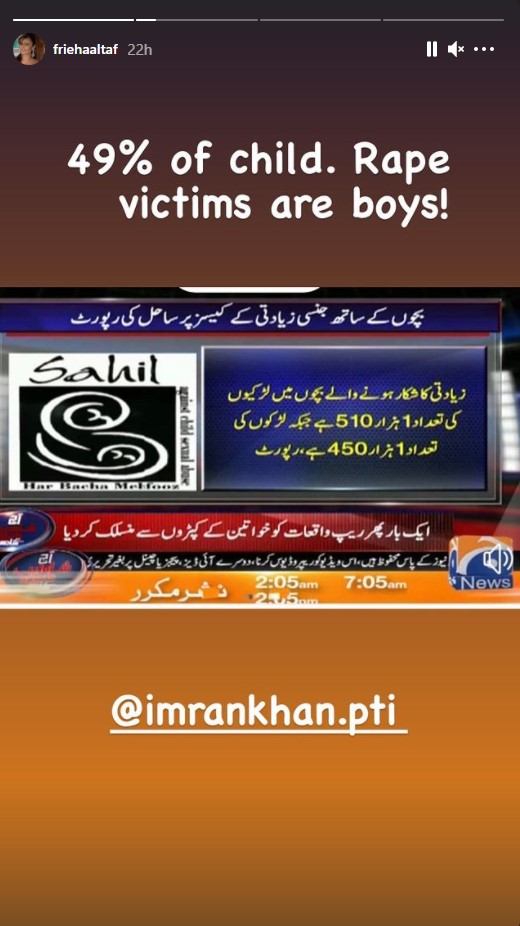 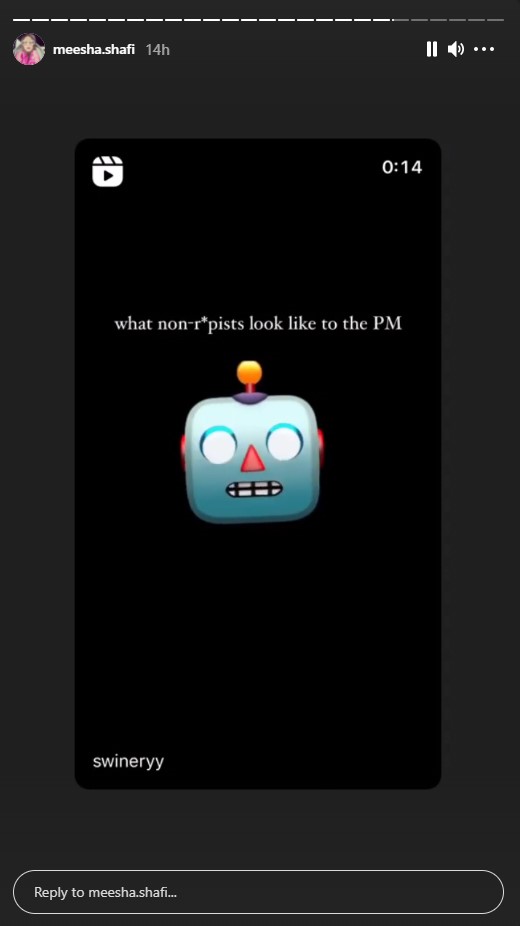 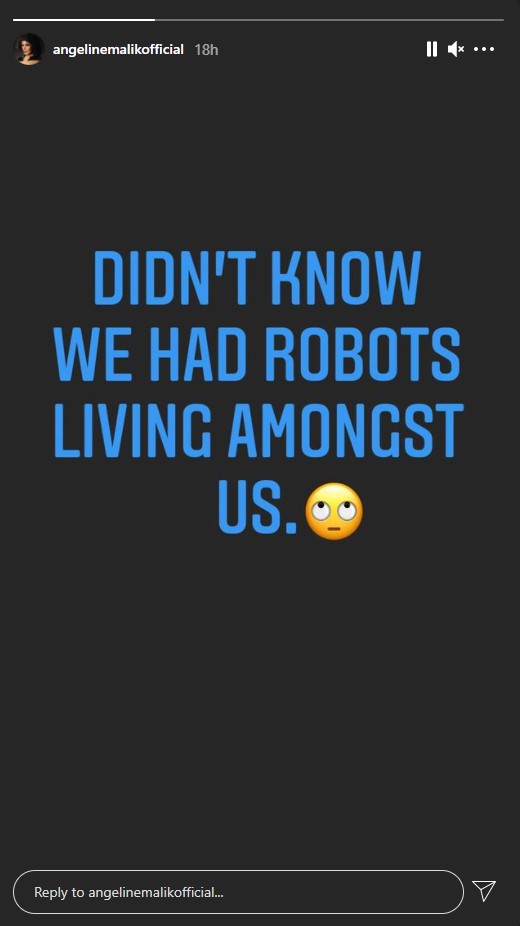 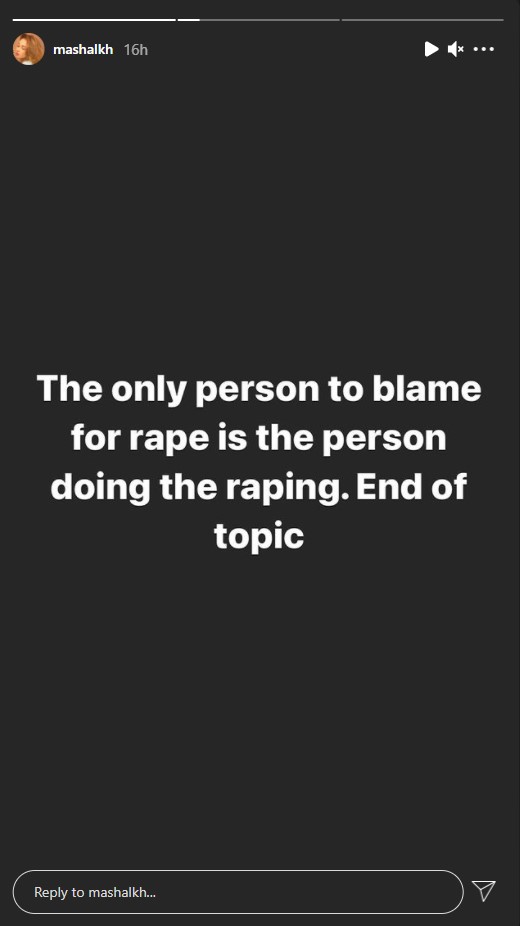 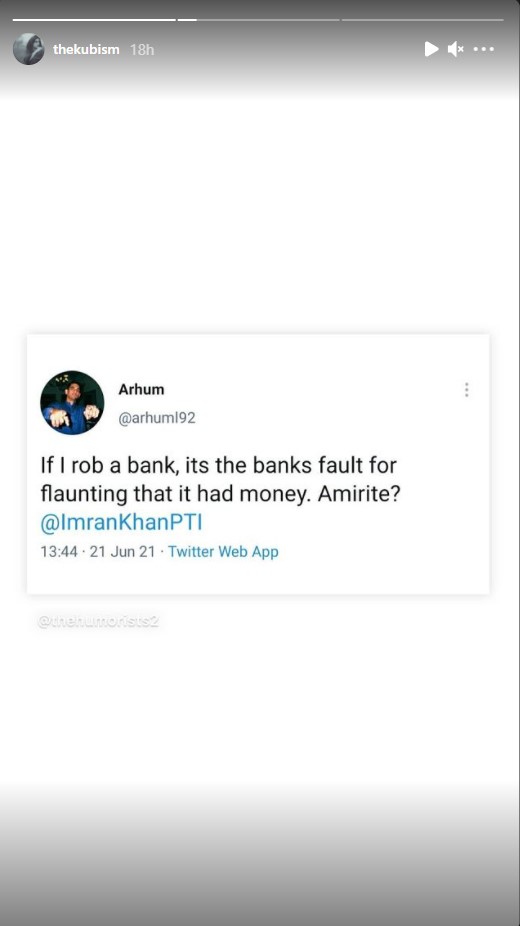 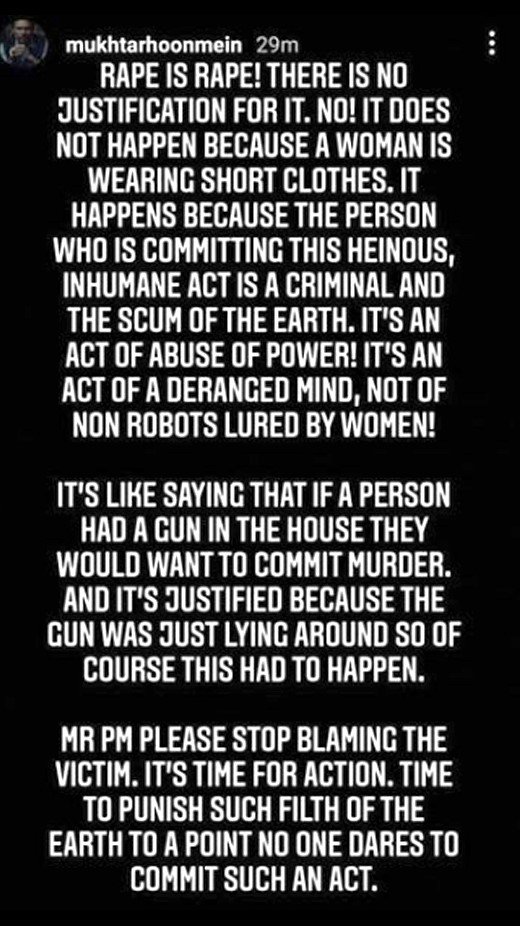 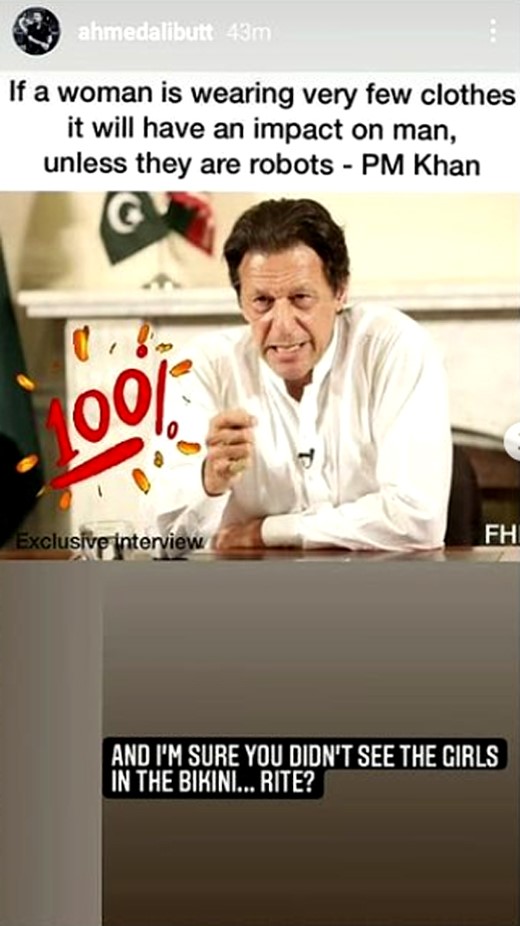 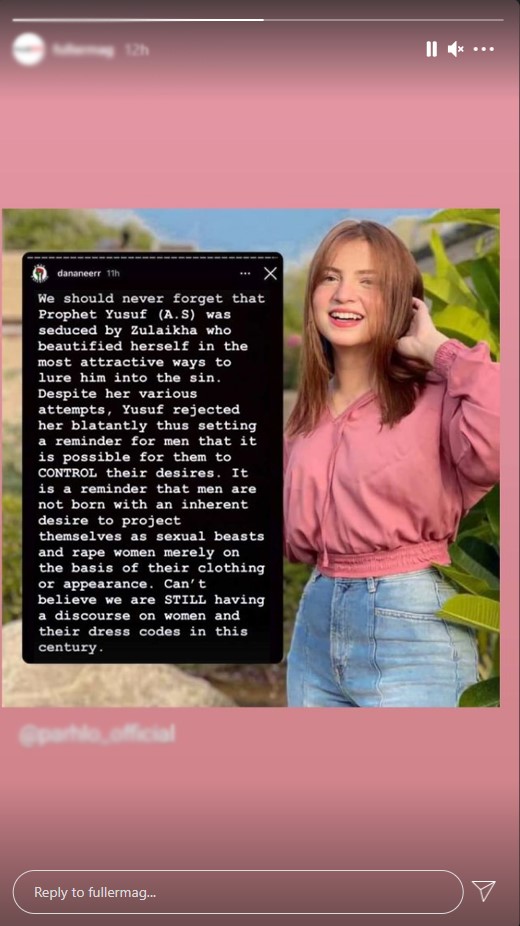 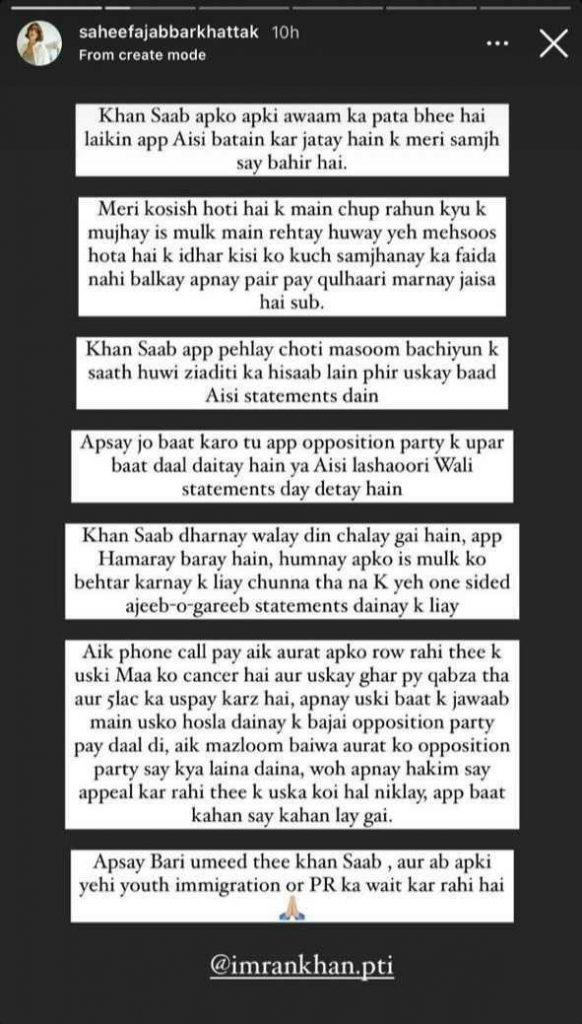 Dear PM @ImranKhanPTI stop humanising the rapists, abusers and harassers and stop objectifying the victims. You may not realise it but when you repeatedly stress upon the clothes of a woman as a cause for temptation leading to sexual violence you do exactly that.

The interviewer @jonathanvswan tauntingly reminds PM Khan he was once a “playboy” and indulged in all kinds of activities which he opposes today….. and the official PM account/team releases the clip with some pride! 🤦‍♀️ @axios https://t.co/WUFq6Lapt0

What you’re saying is if a man goes out wearing a suit he is “contributing” to his murder?

Think again & stop saying “whats wrong in this?”
If you cant see the problem you ARE the problem https://t.co/mvSDa44ped

I agree with the first half of your tweet. But please understand that it is not dressing that eggs these individuals on. The filth is in their own heads. Even if you locked the entire female population away they’ll start r*ping animals. A rapist will always be a rapist. https://t.co/wQWLWa4W2v

Do you agree with PM Imran Khan’s statement? Let us know in the comments section below.