Celebrating Independence Day 2021: Top 10 Patriotic Songs that should be on your Playlist 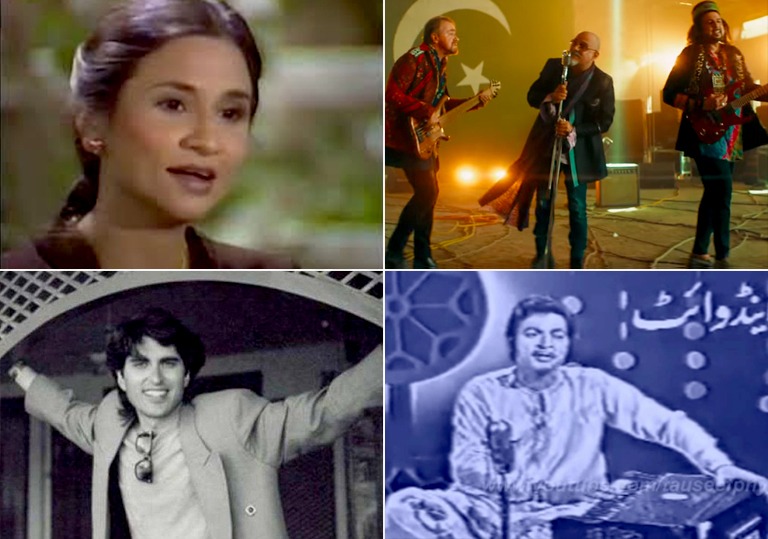 The nation of Pakistan is celebrating its 74th Independence Day amidst the Covid-19 pandemic. For obvious reasons, this scenario won’t allow us to participate in large gatherings and gala celebrations. Thus we all need to celebrate this national festival by staying at home itself. One can also happily spend their day by listening to patriotic songs that make us feel proud.

We at Fashion Times have come up with the top 10 patriotic songs which are all-time favourite for fans and music buffs. Be it the “Wattan Ki Mitii…” or “Mera Paigham Pakistan…”they make us proud and happy to be born as a Pakistani. Let’s take a trip down the memory lane and groove to the classics and enjoy the day.

One of the oldest and famous patriotic anthems of Pakistan, ‘Jeevay Jeevay Pakistan’ was originally released on 14 August 1971 by PTV. The highly popular song was written by Nawabzada Mirza Jamiluddin Ahmed Khan. It was sung by Shahnaz Begum with music arranged by Sohail Rana. The song has managed to stay in the hearts of thousands of Pakistani’s to date, there is no child, adult or anyone who has at some point lived in Pakistan and does not sing along to ‘Jeevay Jeevay Pakistan’ when it is aired every year on the 14th of August.

This beautiful patriotic song has been crooned by the evergreen singer Nayyara Noor. Composed by Arshad Mehmood and put down to words by poet Khalil Ahmed. This song will make you will realize that you are making your land the witness to all that you have been doing to, for and around your soil.

Beautifully composed by the music maestro Niaz Ahmed, the uniqueness of our motherland has been admired in this song. This song was originally sung by Ahmed Rushdi in 1974, which was released by Radio Pakistan, but it got fame when Nusrat Fateh Ali Khan did a remake version in 1997. The lyrics by Jamiludin Aali hold the purest feelings, and you can almost taste the sweetness of this song.

Ustad Amanat Ali Khan, well known for his ghazal numbers crooned this song and made our emotions run a marathon. While the song doesn’t have the usual catchy and fast music, its lyrics are very deep and have a serious meaning attached to it. It perfectly depicts the meaning of love and patriotism.

The famous trio, Benjamin Sisters gave a national song which is the need of our present time. Be it a school function or any patriotic event during the old times, people from different provinces stood together under a huge green flag. This song is a proof that Pakistan holds great importance not only for Muslims but for other minorities living in the country.

This one never gets old. Often hailed as the unofficial national song of Pakistan, Vital Signs’s ‘Dil Dil Pakistan’ won the hearts of Pakistanis since day one. In 2003, ‘Dil Dil Pakistan’ was ranked third in the BBC World Service international poll of popular songs. This particular classic of pure love crooned by the late Junaid Jamshed lives in our heart for eternity.

Who can forget Awaz Band and their songs that still give such joyful vibes? ‘Aye Jawan’ is one of the favourite and popular patriotic songs since decades. It has been composed by Haroon and Fakhir and put to words by Sabir Zafar. The song is indeed one the most young, fun, peppy patriotic number.

Janoon band’s song ‘Jazba-e-Janoon, from the album Inquilaab, became a monstrous hit. The greatest Sufi-Rock band of Pakistan, Junoon dedicated this song to the evergreen passion of the nation, cricket in the light of world cup 1996. It was the first major hit by the band and is still known as the greatest rock hit in Pakistan music’s history.

Sohni Dharti, a prayer that may Allah keep Pakistan united and safe continues to move Pakistanis today as it cascades out of the darkest pages of our history, when everything -even hope – was lost. In that dismal hour, each and every word addressed to the Creator to keep Sohni Dharti protected, (land of Pakistan) injecting new life into the people of this country, even today.

Sung by Alamgir, this 90s song also featured Benjamin Sisters and reminds us about our own responsibility as citizens of the state.

Wishing you all a very happy Independence Day