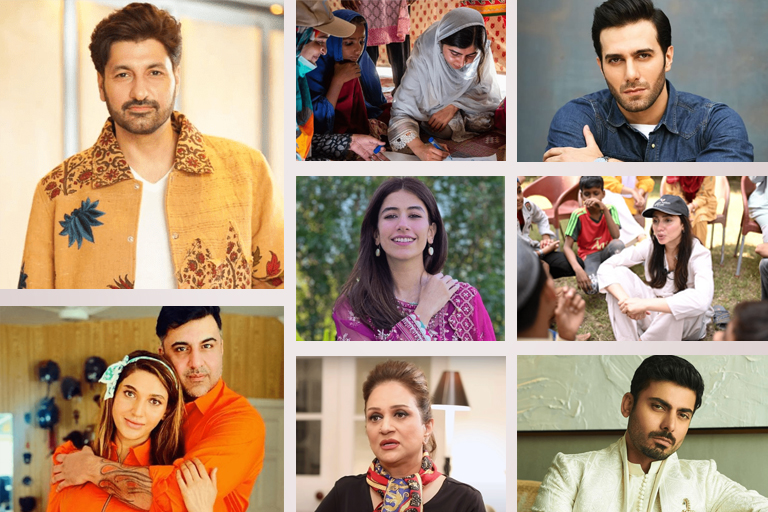 The superstar of Pakistan Fawad Khan Bollywood inning was halted due to the political conditions between the countries. In a recent interview, Khan spoke about the possibilities of reuniting with the Bollywood fraternity. “I have a great relationship with the people that I’ve worked with and made great friends. I would love to see them again someday, and maybe work with them again. Whether it be for an international platform, a Pakistani platform, or for an Indian platform. Mainstream Bollywood is a different ball game altogether.”

Emmad Irfani and Maya Ali’s upcoming film Aasmaan Bolay Ga (ABG) is all set for a theatrical release. The lead actor Irfani told Images, “We’re looking [to release the film] at the end of this year. We’re working on the date, I hope [it’s] December or January.”

Syra Yousuf Talks About Nooreh’s Bond With Half Sister

Shahroz Sabzwari’s ex-wife Syra Yosuf made an appearance on Pyar Zindagi Aur Karachi for Fuchsia Magazine. The Sinf-e-Aahan actress spilled the beans on the relationship of her daughter Nooreh with Zahra. “You know all of her friends have siblings and even Alishba [Yousuf’s eldest sister], she has two kids, so she has seen siblings everywhere and she wanted one. So when Zahra was born she was on top of the world and it’s lovely to see, it makes me very happy to see her feel that way towards [her sister].”

Bilal Lashari’s much-awaited film has got limited screening notably not at cinema chains Cinepax and Nueplex. The Ghabrana Nahi Hai actor took to Twitter on Friday and wrote that the deadlock happening at the moment for The Legend of Maula Jatt is between distributor Nadeem Mandviwalla and officials of Cinepax cinemas and Nueplex. “Increasing the ticket price they are just decreasing the repeat customers. It’s short-sightedness. Plain and simple. This will badly damage the reputation as well as a chance to create a historic box office first-day score for the film,” he reasoned.

Sana and her husband Fakhar Jaffri have decided to end their marriage. The former made it official by posting an Instagram story that reads, “Breakups hurt but sometimes, breaking a relationship is so mandatory to save yourself [from] break[ing] so much. With all [due] respect, me and Fakhar, after several years of marriage through highs and lows, [have] decided to take separate paths. It’s heartbreaking but… I strongly believe that God has better plans for both of us. All the best Fakhar Jaffri,” she wrote.

Malala visited Pakistan to help with the recent flood affectees. She urged that international communities should contribute to the flood relief so that girls can go to school. Her Instagram story read, “This week, I returned to Pakistan to visit communities and hear from young women and educators impacted by this summer’s devastating floods that destroyed an estimated 24,000 schools. Half of those were in Sindh,” she wrote. “The destruction is astounding. Some villages are still sunk underwater. People are waiting for their homes, schools, hospitals and shops to be repaired and reconstructed.”

Recently, she made an appearance on Tabish Hashmi’s talk show. The veteran actor shared that while Pakistan Idol surely explore great talented singing, some parts of the show were completely staged also. She also added that the actual motive was to sell the show in a way that stands according to the standards of the international show Pop Idol.