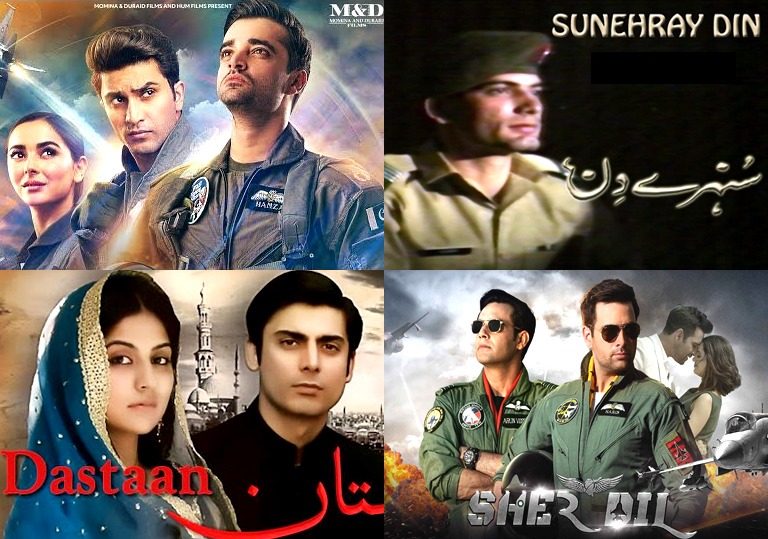 The entertainment industry of Pakistan has churned out some really heartwarming dramas and blockbuster patriotic movies that give us Goosebumps whenever we re-visit them. So, on this Independence Day, we present some of the amazing movies and dramas that you can binge-watch to reignite the fire of patriotism and celebrate the spirit of nationalism. Scroll down…

Patriotic movies that greatly inspires us

‘Khuda Kay Liye’ is one of those initial movies to have come out during the revival of Pakistani cinema. Starring, Shaan Shahid, Fawad Khan and Iman Ali in pivotal roles, it had cameo appearance by Bollywood actor Naseeruddin Shah. The film follows Mansoor and Sarmad (played by Shaan and Khan), two singers whose lives change after the events of the 9/11 attacks in America and misinterpreted teachings of Jihad. The film was a huge success and won many accolades.

The 2017 war film is based on an actual military operation conducted in the Piochar region of Swat district. The most expensive film to date explored the lives of those involved, including the militants, and how all of them got affected at a personal level due to the ongoing operation. It stars Shaan Shahid in the lead role, along with Humayun Saeed, Adnan Siddiqui, Armeena Khan, Aleeze Nasser, Ayesha Omer, Sana Bucha and Bilal Ashraf. The film also paid tribute to the slain children of the 2014 Peshawar school attack while simultaneously mirroring the sacrifices of our national heroes. Yalghaar will surely awake your inner patriot.

Set against the backdrop of the Pakistan Air Force, Sherdil tells the story of two fighter pilots from arch-rival India and Pakistan and their friendship despite all odds. The film is packed with action and an equal dose of emotions, love, laughter. It has the best dogfight scenes of fighter jets ever filmed in any Asian movie. Written and produced by Nomaan Khan, directed by Azfar Jafri, the film stars Mikaal Zulfiqar, Hassan Niazi, Armeena Rana Khan and Sabeeka Imam. Sherdil was a huge commercial success at the box office.

Parwaaz Hai Junoon is a tribute to Pakistan Air Force. The aerial combat-war film has everything one could look for; romance, light-hearted comedy and power-packed action sequences. It gave us some useful new insights into the trials and tribulations and personal aspects of the air force. Directed by Haseeb Hassan, produced by Momina Duraid and written by Farhat Ishtiaq, the film features an ensemble cast of Hamza Ali Abbasi, Ahad Raza Mir, Hania Amir, Kubra Khan, Alamdar Khan, Marina Khan, Shamoon Abbasi, Adnan Jaffar, Shaz Khan, Shafaat Ali, and Mustafa Changazi in pivotal roles. If you are a die-hard PAF fan then you shouldn’t skip this one.

Sunherey Din was aired on PTV and was based on the lives of young men receiving military training at Pakistan Military Academy in Kakul. The cast included newcomers of the time, such as Saleem Sheikh, Kiran, Aliya Kazmi, Hameed Waine, Mumtaz Musharraf, Azra Mansoor and Malik Faraz. Saleem’s character joined the army against the will of his mother. He went through intense training by his seniors, which was an essential practice to toughen the young cadets. Though the serial was quite informative, it was presented with a witty angle to retain the entertainment factor.

A sequel to TV drama series ‘Sunehrey Din’, Alpha Bravo Charlie showcased the Pakistan Army’s operational involvement in the Bosnian War and Siachen conflict. The events in the drama also involve romance and comedy. The series ran on PTV from May till July 1998. The drama was produced by PTV Lahore centre and Shoman Productions.

‘Daastan’ is based on the true events of the partition in 1947. One of the most powerful narratives being aired on television, ‘Daastan’ is primarily a pre-partition love story between Bano and Hassan. It shows how the two families lost their loved ones to achieve ‘Pakistan’. The series depicts the events of rioting and chaos in 1947.

‘Dhuyaan’ is the first action drama produced by PTV. The play is based on the story of five friends, who take the challenge to fight against the terrorists and drug dealers. Ashir Azeem penned the story and also played one of the leading characters, alongside Nabeel, Nazli Nasr and Naiyer Aijaz, who are still remembered today. The serial is known for its neat outdoor shooting and liberal use of ammunition to convey realism.

Aired on Pakistan Television (PTV), Wilco was made in collaboration between Seventh Sky Entertainment and ISPR, and was directed by Ahsan Danish. Wilco is a story of unforgettable courage, valor, romance and sacrifice. It is also a tale of survival. This epic-like presentation is one that also sheds light on the Men in Khaki who take pains so that we live in comfort. It was the cast that stood out in this drama, with popular actors like Humayun Saeed, Adnan Siddiqui, Ahsan Danish, Laila Zubairi, Amina Sheikh, Beenish Choohan and Imran Abbas.

Which movie or drama will you be watching this Independence Day? Let us know in the comment box