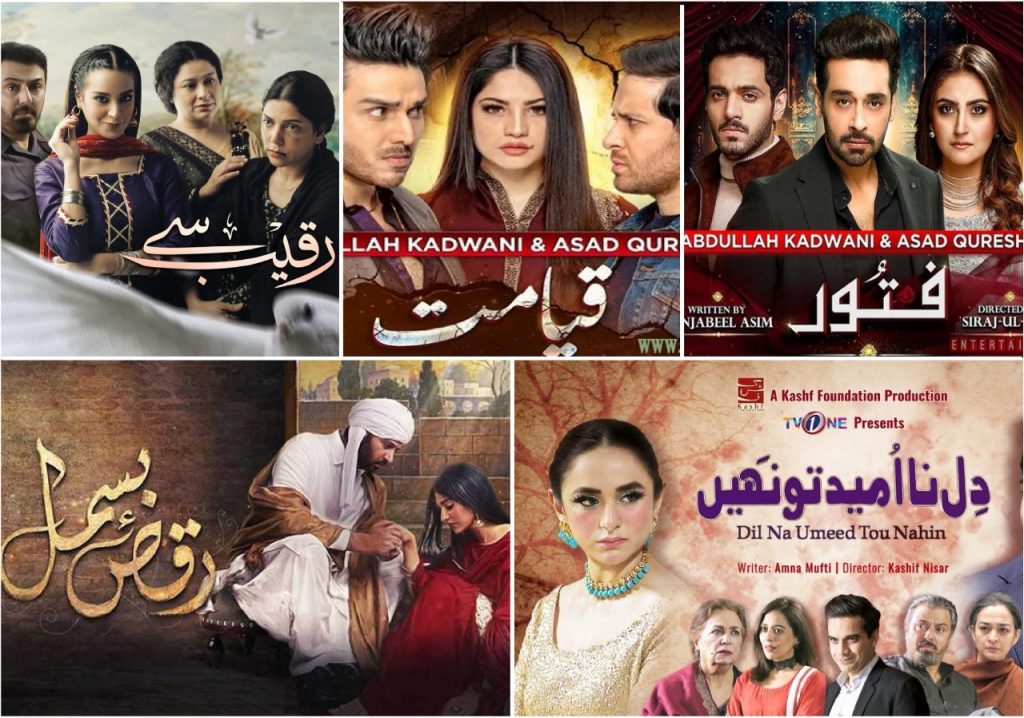 Dramas in 2021 proved to be saviors as they gave us a ray of positivity during the ongoing pandemic. What’s interesting is that within the past six months we have witnessed narratives powered by realism and innovation that truly made dramas unique and unforgettable.

It’s time to have a short trip down the memory lane. Now before we move on let us clarify some facts i.e. choosing the best 5 wasn’t an easy task. It’s wasn’t just about choosing a hit show with the highest ratings; there were other peripherals to consider as well. The ones that have made it to the list had these things in common: a coherent plot, intelligent writing, strong performances, and good directions. Read on…

A stellar cast, great script, enormous mass appeal, and wonderful directions; Qayamat was a blockbuster right from the word go. The captivating play with an ensemble cast perfectly captured the vexing issues on the face of this earth ‘Domestic abuse’. It also highlighted the issues related to the misogyny that still exists in the social fabric of our society. The multi-layered story explained in detail how people who appear to be nice and kind are hiding horrible natures and further concluded towards a shocking climax. Towering performances by Ahsan Khan and Amar Khan made it a thrilling watch.  One can’t deny the fact that amidst a tough prime time competition, Qayamat held its ground and witnessed skyrocketing TRP’s with every episode and top trending on YouTube as well.

It wouldn’t be wrong to say that Raqeeb Se was one the most relevant and important dramas we’ve come across lately. A unique tale of romance, conflict, and domestic violence made us see the world from a new perspective. It transported us to a world that we used to read about in books and novels.  Mixing this brew to the fullest was director Kashif Nisar who was interested in exploring the darkness and insecurities that reside within the hearts of ordinary people. We were glued to the screen, with the fear of not missing any moment. The result was a delicious play that delivered more than our expectations.

Raqs-e-Bismil came across as a well-crafted product that had the right balance of romance, intrigue, and emotions. It had a universal theme of forbidden love that usually has a terrific mass appeal. Ashraf as ‘Moosa’ and Sarah Khan as ‘Zohra’ gracefully unfolded the underlining message of love, coupled with the love of God. Bolstered by great supporting acts, the serial maintained a level of exceptional quality with every episode ending on a cliffhanger. The finale episode left the viewers hinting for a second season.

Channel: TV One and PTV

Dil Na Umeed Tau Nahi was a sensitive tale of power, sacrifice, selflessness, and resilience. It’s not the first time a drama has talked about such harsh realities of life, but it’s certainly one of the few most pragmatic ones that unveil the society in which humanity is dead. Parents selling and abusing their children in the face of adversity; those responsible for the safety of the citizens are involved in women and sex trafficking and corruption eating away the core of law and order. The unique thing about the show was the depiction of human emotions and the differentiation between good and bad. The characters were flawed yet believable and women, in the end, were showcased with an empowering aspect. Fabulous performance by Yumna Zaidi made this serial standout.

We rarely get to watch love stories done to perfection. Fitoor caught the viewer’s attention as it has been a long time since a love story has impressed us on many levels. It beautifully sheds light on relationships that revolve around family and love. The best thing about Fitoor is the fact that it’s a simple yet refreshing take on romance; the sincere performances, effective directions and strong writing makes it a universal hit. The success mantra of 7th Sky Entertainment continues as the drama serial (now heading towards its finale) throughout remained the first choice of the viewers.

Here’s hoping that the second half of 2021 will entertain the viewers with more exciting dramas.