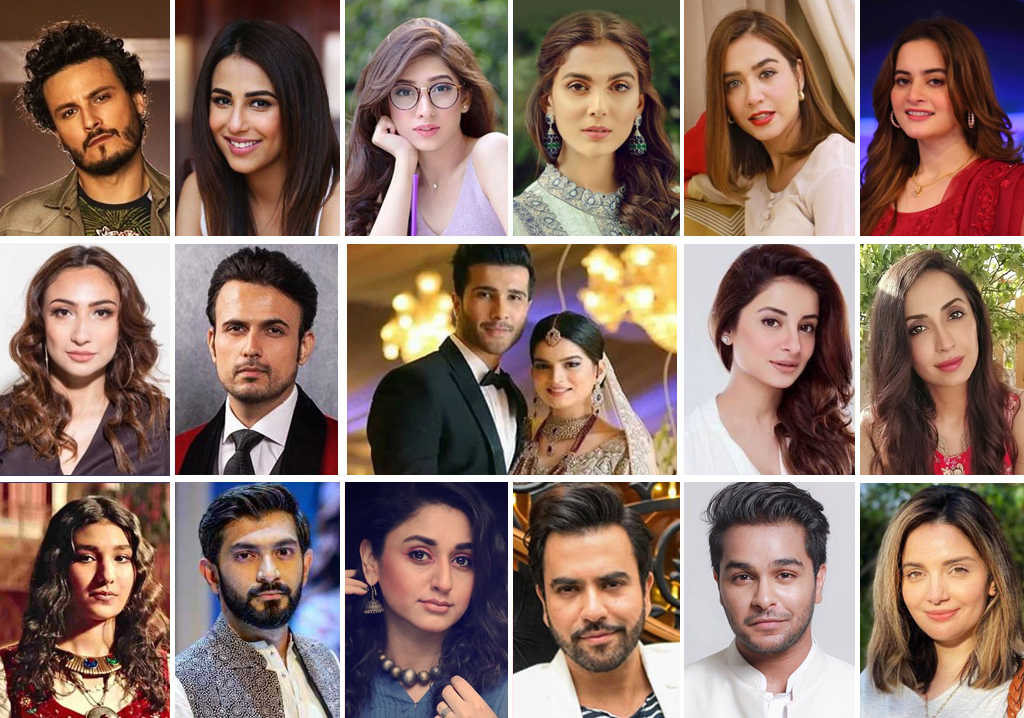 The beast of domestic violence is a serious concern for developing countries like Pakistan where not only the housewives living inside the cornered house are suffering but also the women of the glamour world. And the story is no different when it comes to celebrities, as now and then, we hear of star wife’s filing domestic violence complaint against their husbands. In a highly shocking affair, Syeda Aliza Sultan ex-wife of actor Feroze Khan recently filed abuse evidence to the court.

For the unversed Feroze Khan and Syeda Aliza Sultan officially filed for divorce on 3rd September. The two are currently dealing with the necessary legal proceedings and were even spotted outside of Karachi Court. The family court granted the children’s custody to Aliza and has allowed the actor to visit his kids twice a month.

As reported by Express Tribune, the documents confirm that Aliza submitted harrowing evidence of alleged abuse at the hands of Feroze in the court, along with several medical reports, dating back to 2020 and 2021. The pictures are apparent evidence of Aliza’s earlier claims of being subjected to ‘severe physical abuse by the Habs actor.

Aliza’s sudden revelation has shocked the industry. Many actors from the industry have come forward to condemn Feroze’s alleged violent attacks on his ex-wife.

Why do we blame them when they manage to escape?”, she wrote in another tweet

• Blunt injuries to both arms + back and chest. Ya Khudaya!!
Why do we raise voice only when they’re dead?
Why do we blame them when they manage to escape?#JusticeForAliza https://t.co/BTWvHvVgYz pic.twitter.com/pORU7fTvS8

The Kala Doriya actor shared his views on the matter and tweeted, “I hope and pray you to get the justice you deserve, Aliza.”

I hope and pray you get the justice you deserve, Aliza. https://t.co/XvNRH6ORO5

The Sherdil actor wrote,“Ladies, for goodness’ sake, stop putting up with abusive husbands. Back away the moment they start showing violent tendencies doesn’t matter if you have kids or not. The Creator will provide for you.”

Ladies, for goodness sakes stop putting up with abusive husbands. BACK away the MOMENT they start showing violent tendencies, doesn’t matter if you have kids or not. The Creator will provide for you.🙏🏻🙏🏻🥺 💔

The Humsafar actor wrote on Instagram, “There’s no excuse, no fandom, no friendship and no idolisation so important that allows us to ignore violence and make excuses. It’s time to put a stop to this! We won’t sit by and wait for more Noor Mukadams, more Sara Amirs just for the sake of not troubling the waters. For the sake of decency. So, that tomorrow when you speak about *important issues*, you don’t sound fake and virtue signalling. Speak!”

Aiman added, “Domestic violence is not okay. Speak up! May Allah make it easy for you, my love Aliza.”  Minal Khan, while sharing a post about the same, commented she felt “sick”. 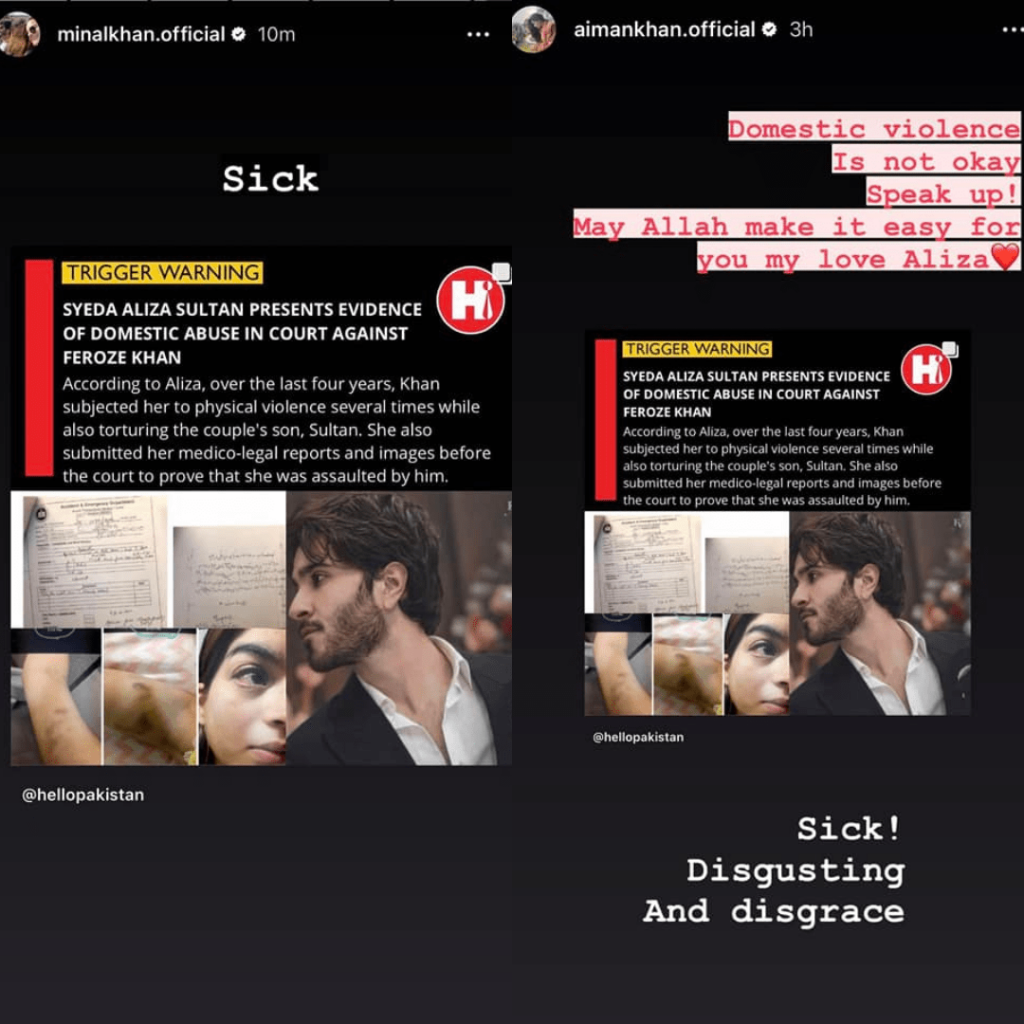 “Shame on you, Feroze Khan” tweeted Khan, “Imagine a demon in disguise. Appearances are so deceptive. My deepest sympathies to Aliza. Thank God, you are out of this toxic relationship and safe. Stay strong, girl.”

Imagine a demon in disguise. Appearances are so deceptive. My deepest sympathies with Alizay.
Thank God you are out of this toxic relationship & safe. Stay strong girl
Shame on you #FerozeKhan pic.twitter.com/zCn5J4MH5r

“Domestic violence is not okay because apparently people still need to hear this. I hope Aliza gets justice.” 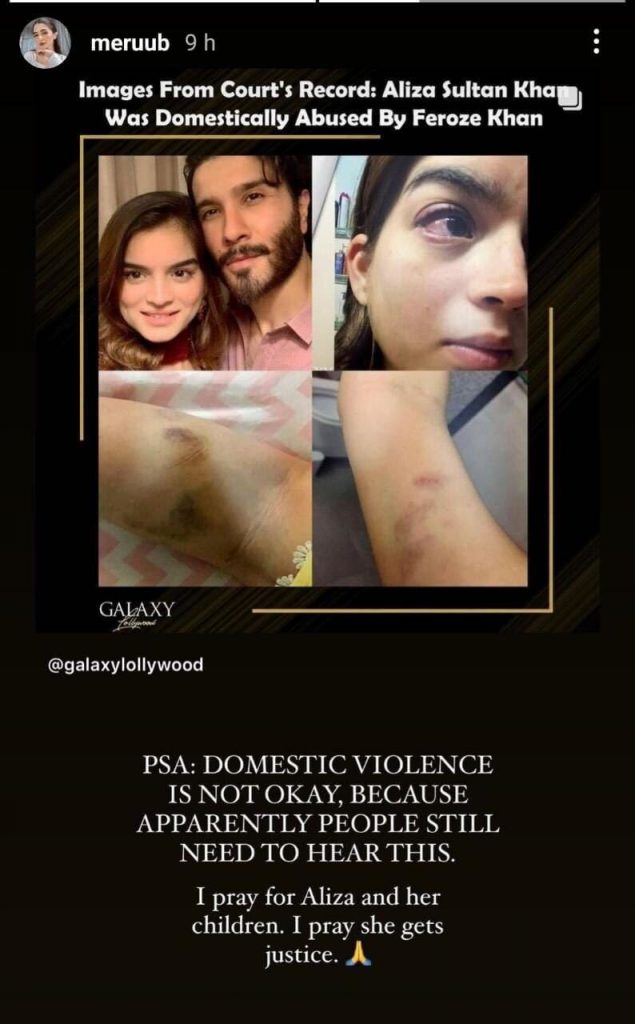 The VJ spoke her mind and shared, “I am so sorry, Aliza. There is no room for violence in my world and I’d be sorry to turn a blind eye to this one.” She added, “It’s awful that people may still ask why it took you so much time to speak up, Little do they know how brave it is for you to speak up even now. As difficult as it is for us to speak up against someone we know personally, it’d be wrong for me to look the other way this time. Hope the courts render you justice.” Anoushey concluded with, “My prayers are with you, Aliza.” 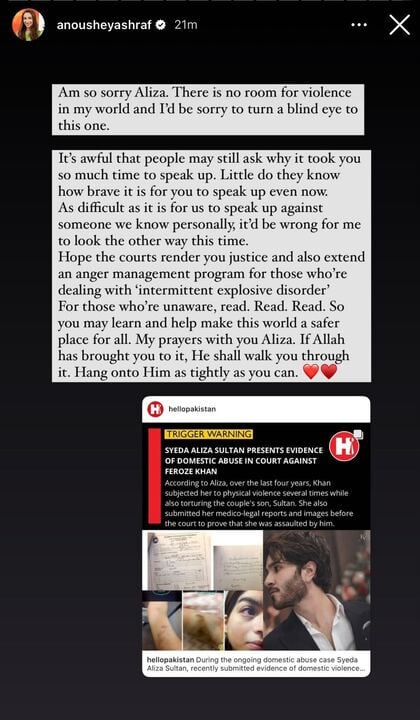 The Joyland actor called for a ban on the actor. “Ban wife beaters and cheaters from representing our industry.” 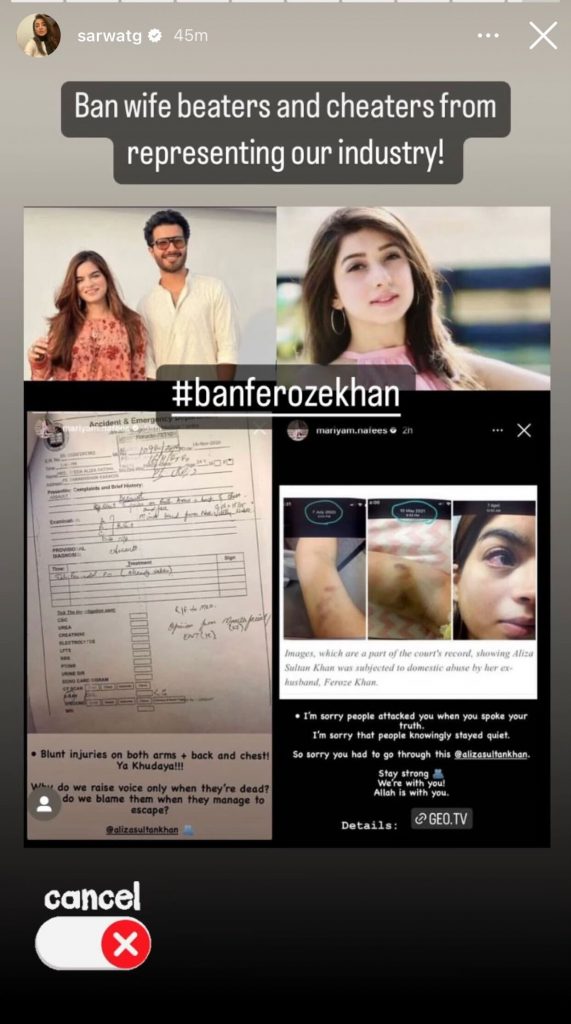 Actor Zara Tareen posted a comment on Instagram in reply to Gilani in which she said she is sick and tired of having to be quiet because there’s “no real approach to addressing abuse of any sort”. “People assume we in the industry somehow have more power when in fact we are constantly cornered by threats of defamation or worse,” she said, calling for a ban on Feroze Khan and “all other lowlifes like him” 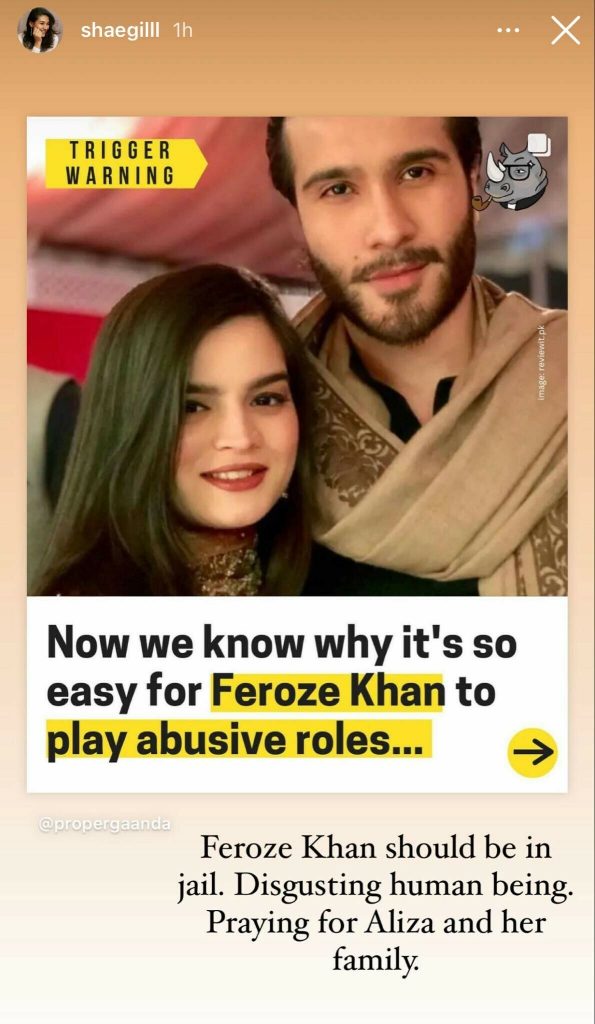 Coke Studio’s singer Shae Gill demanded Khan be put behind bars and called him a “disgusting human being”. “Praying for Aliza and her family,” she wrote.

I am still processing this and am in a state of shock. Nothing can and will justify violence against a woman. My heart is with Alizah as well as Sultan, and Fatima.

Khan’s co-star from on-air drama Habs Ushna Shah also sided with Sultan and wrote, “I’m still processing this and am in a state of shock. Nothing can and will justify violence against a woman. My heart is with Aliza as well as Sultan and Fatima.”

Habs director Musaddiq Malek also took to Instagram and said that the on-air show will have its 25th episode up today. “A team of 40 people worked day and night for 100+ days to put up a show with literally blood and sweat, can’t let some ignorant, self-centered, egoistic man to ruin that for all of us. Please keep the art (Habs) separate from the artist i.e. (a*****e) in this case,” he wrote. Malek also plays Fahad, Khan’s best friend in the show. 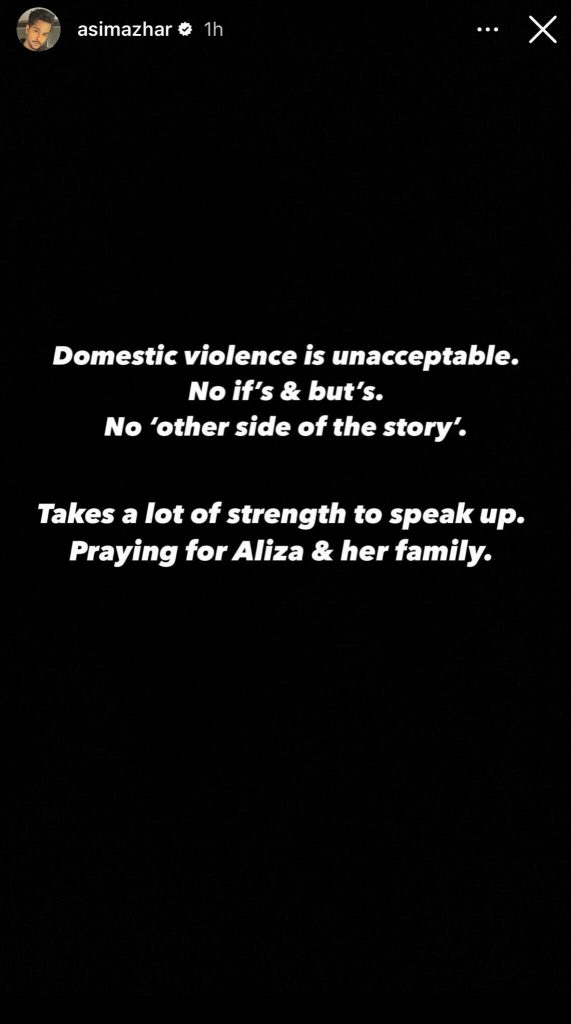 “Domestic violence is unacceptable. No ifs and buts. No ‘other side of the story’,” wrote singer Asim Azhar on his Instagram story. “Takes a lot of strength to speak up. Praying for Aliza and her family.”

The couple had gotten married in March 2018 and have two children together a boy and a girl.