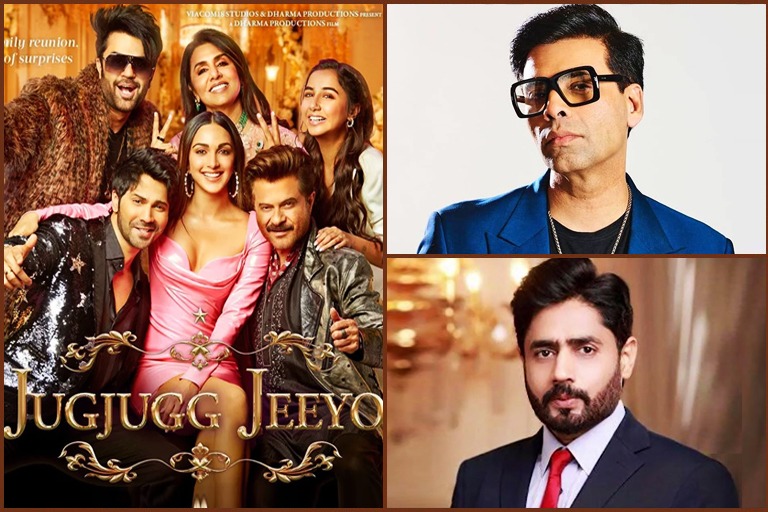 It’s no secret that Bollywood lifts songs from Pakistan without ever giving them due credit. Pakistani songs, their compositions and tunes are being copied by those across the border all the time. In fact, in April this year singer Kanika Kapoor copied Hadiqa Kiani’s iconic track ‘Bohe Bariya’ frame to frame in her music video and that too without giving credit.

Karan Johar along with his actors Varun Dhawan, Kiara Advani, Neetu Singh and Anil Kapoor shared the trailer of their upcoming film on Instagram. Much to everyone’s surprise, it featured the song, ‘Nach Punjaban’ a blockbuster hit from Abrar-ul-Haq’s album released way back in 2002.

Haq took to his Twitter account and wrote. “I have not sold my song ‘Nach Punjaban’ to any Indian movie and reserve the rights to go to court to claim damages. Producers like Karan Johar should not use copy songs. This is my 6th song being copied which will not be allowed at all.”

I have not sold my song “ Nach Punjaban” to any Indian movie and reserve the rights to go to court to claim damages. Producers like @karanjohar should not use copy songs. This is my 6th song being copied which will not be allowed at all.@DharmaMovies @karanjohar

Movie Box in an official statement said on Twitter that the song had been officially licensed to be included in the film and that Johar and his production company have the legal rights to use the song in the upcoming movie. They also called the 53-year-old singer’s tweet “defamatory” and “completely unacceptable”.

Nach Panjaban has been officially licensed for it to be included in the Film “Jug Jugg Jeeyo” by @TSeries. @karanjohar & @DharmaMovies have the legal rights to use this song in their film and the tweet by @AbrarUlHaqPK earlier today is defamatory and completely unacceptable.

Record label T-Series also issued a statement on Twitter and said that they have “legally acquired the rights to adapt the song ‘Nach Punjaban’ “that was released on iTunes on January 1st, 2002 and available on Lollywood Classics’ YouTube channel, owned by Movie Box.”

We have legally acquired the rights to adapt the song #NachPunjaban released on iTunes on 1st January, 2002 & available on Lollywood Classics’ YouTube channel, owned by @1Moviebox, for #JugJuggJeeyo produced by @DharmaMovies. The song is available here: https://t.co/2oLFzsLAFI pic.twitter.com/t6u3p3RA6z

A Sneak Peek into Jugg JuggJeeyo

The film is said to be a “a story set in the heart of Patiala and much like the city, it’s full of love and laughter, color and drama. It’s about family and its values, unresolved yearnings, and unexpected reconciliations.” The family drama is directed by Raj Mehta (Good News fame) and is joint venture between Viacom 18 studios and Dharma Productions. The film will release on June 24 his year.

This is a developing story and is being updated accordingly