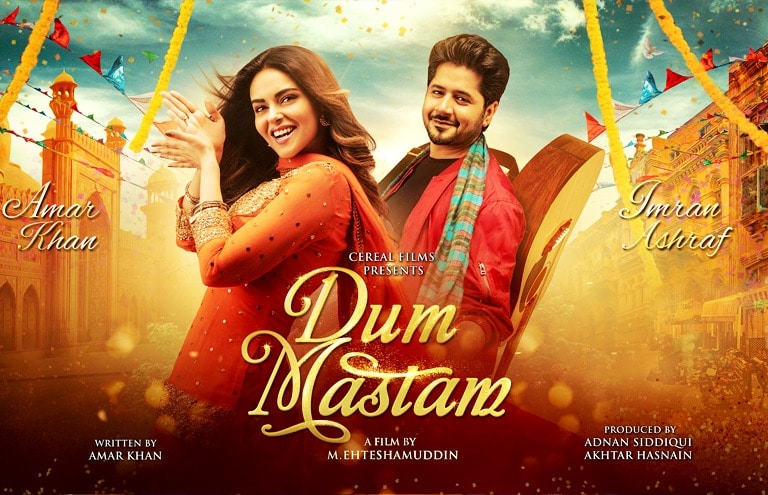 Most of us being desi at heart, tend to connect more with stories that are set in our backyard. Love is still unabashed, and heartfelt and mostly tends to begin as one-sided. As the boy devotes himself to the girl, his life centers on the charming crush that wouldn’t last much longer because the family politics would intervene. Yet, the colorful and vivacious city of Lahore unfolds one such love story that grows into a painstaking pursuit of love. And that’s the first thing you observe as the reels of Dum Mastam unspool. The talented M. Ehteshamuddin (director) places his plot in Lahore and concludes the tale in Karachi.

M. Ehteshamuddin attempts to encapsulate the love story of regular people caught in a complex scenario in his new outing Dum Mastam. The focus is on emotions here and Dum Mastam is akin to a container that encloses myriad emotions such as affection, abhorrence, penance, and euphoria. On the surface, this may seem like an uncomplicated story, but scratch the exterior and there’s a strong undercurrent of emotions ready to explode and engulf you. Embellished with a taut screenplay and superb performances, Dum Mastam easily charms its way into your heart.

Dum Mastam narrates the story of Bao (Imran Ashraf) who is smitten by Aliya (Amar Khan). The latter is an ambitious girl, an aspiring dancer who secretly learns dance to polish her craft. To impress Aliya, Bao spends his entire day with her at the rehearsals. Trouble arises when Aliya gets injured while dancing and surprisingly Bao is behind this accident. What happens next forms the rest of the film.

The film begins on a strong note with a typical Lahori wedding sequence turning out to be quite interesting. How Bao chases Aliya will surely put a smile on the faces of the viewers. A couple of sequences stand out here – Bao meeting Aliya at her house while fixing the switchboard at night and all their confrontations in the college. There are heartrending and sequences that astonish. That’s when you put your hands together for the screen writerfor being so unconventional and so innovative.

Ehteshamuddin’s keeps the film very rooted and also tells a very relatable story. He shines in the climax. In some sequences, he takes the film to another level. For instance, the scene where Bao and Aliya have a showdown on the streets after watching a film is very well handled. The film manages to hook you with the atmospherics, the ingenious narrative and worthy performances win you over gradually. The romance, the simplistic lines, the heartbreak transports you to a different zone altogether. The dream-like world gives the impression of being pure initially, but this illusory world is soon shattered by reality as the plot thickens.

The film goes on a high as soon as Guddu Razor (Momin Saqib) enters the frame. Post interval, the film switches tracks as Bao moves to Karachi to try his luck. The film does get a bit slow in the second half but then it was necessary to show the struggle and hardships. But the best is reserved for the finale. The sequences before the wrap-up are the high point of the movie and you can’t help but applaud the writer (Amar Khan) for thinking out of the box. The DoP captures the stunning locales of Lahore and Karachi exquisitely. The radiant colors explode in every sequence, getting you enthralled at numerous junctures. Dialogues, befitting the milieu and characters, is interspersed dexterously in the sequence of events.

The musical score fits into the scenario admirably. The music, the songs, as well as the background score, augment the impact on several occasions. The quality of music is supreme and each of the compositions has the distinctive stamp of uniqueness and exclusivity, be it Shiraz Upal for Larki Achari, Bilal Saeed for Beqarar Dil, Azaan Sami Khan for Ik Vari Sun Le, or Nabeel Shaukat for Tu Heer Meri. The soundtrack of Dum Mastam grows on you, and one feels like hearing it persistently.

Talking of performances, debutant Imran Ashraf is simply outstanding. To state that he’s the mainstay of the film would be most appropriate. You take back his innocence, his dedication to his beloved, and his emotions as you exit the theatre. Here’s a performance that deserves an ovation! Amar Khan makes an extremely confident debut. M. Ehteshamuddin places his trust in her and she is remarkable all through. She looks beautiful, classy, and delivers a dumdaar act. Definitely, a star is born! Her confidence from the very start is infectious and her overall performance is worthy of all the awards next season.

On the whole, Dum Mastam encompasses romance and myriad emotions most wonderfully, besides bravura performances and a popular musical score. A film that touches the core of your heart. A film that’s definitely worthy of a watch. Not to be missed!